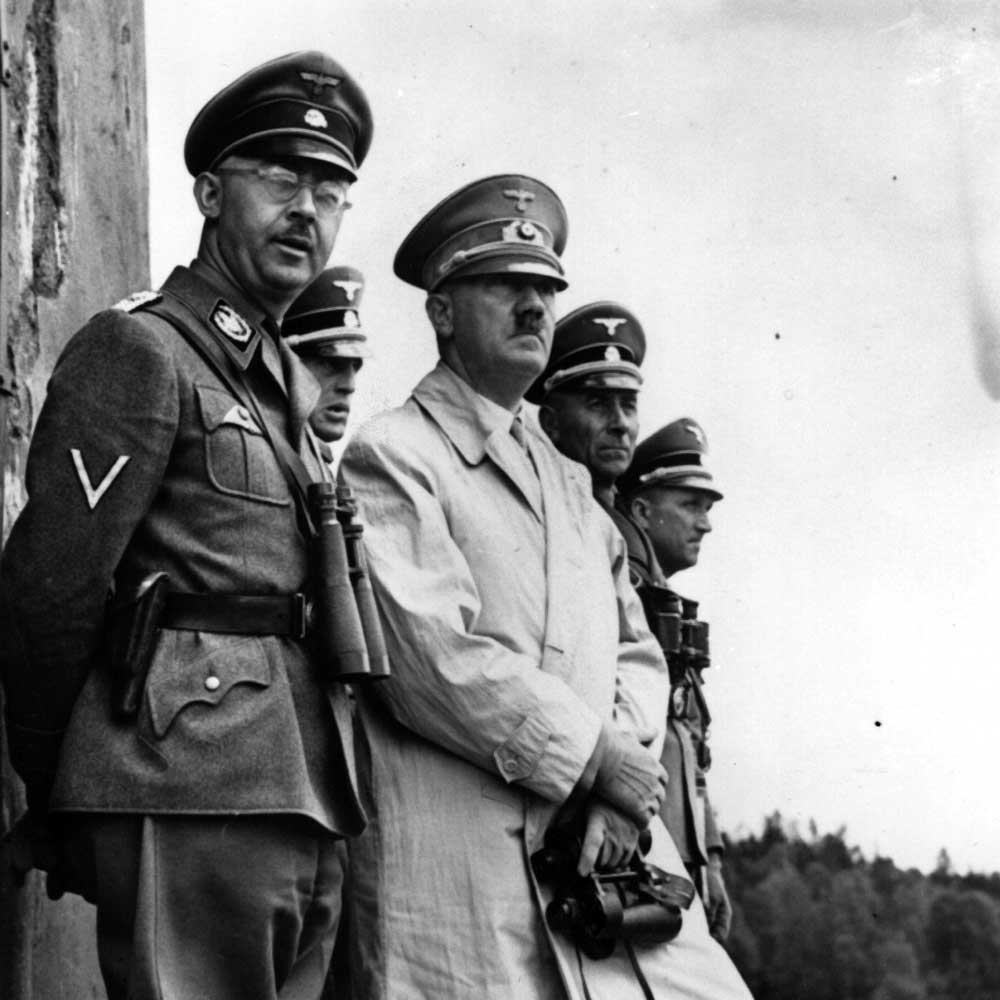 Here you will see only one line drawn between Hitler’s and Himmler’s planets. The two were of significantly different character, and that is reflected in the exact Opposition from Himmler’s Mercury applying to Hitler’s Sun. Although they are drawn to each other as part of the dynamic of an Opposition, there is also potential for open conflict, especially when the only astrological contacts are occupying the Cardinal/active 1st and 7th houses. What they shared in common was their ideology (Fixed signs) of superiority, which polarized them at the same time as drawing them together in relationship. Himmler’s Mercury curiously spotted Hitler’s Sun as the embodiment of the Nazi movement.

I do not take into account Sextiles, Squares, Trines, minor aspects, Nodes, Parts or Ascendant and Midheaven contacts as these have no indication of mass or weight in relationship from one horoscope with another. Only planets in Conjunction and Opposition in mutual contact create stress and pressure to the degree that they can easily be felt and experienced by the natives of the horoscopes in question. 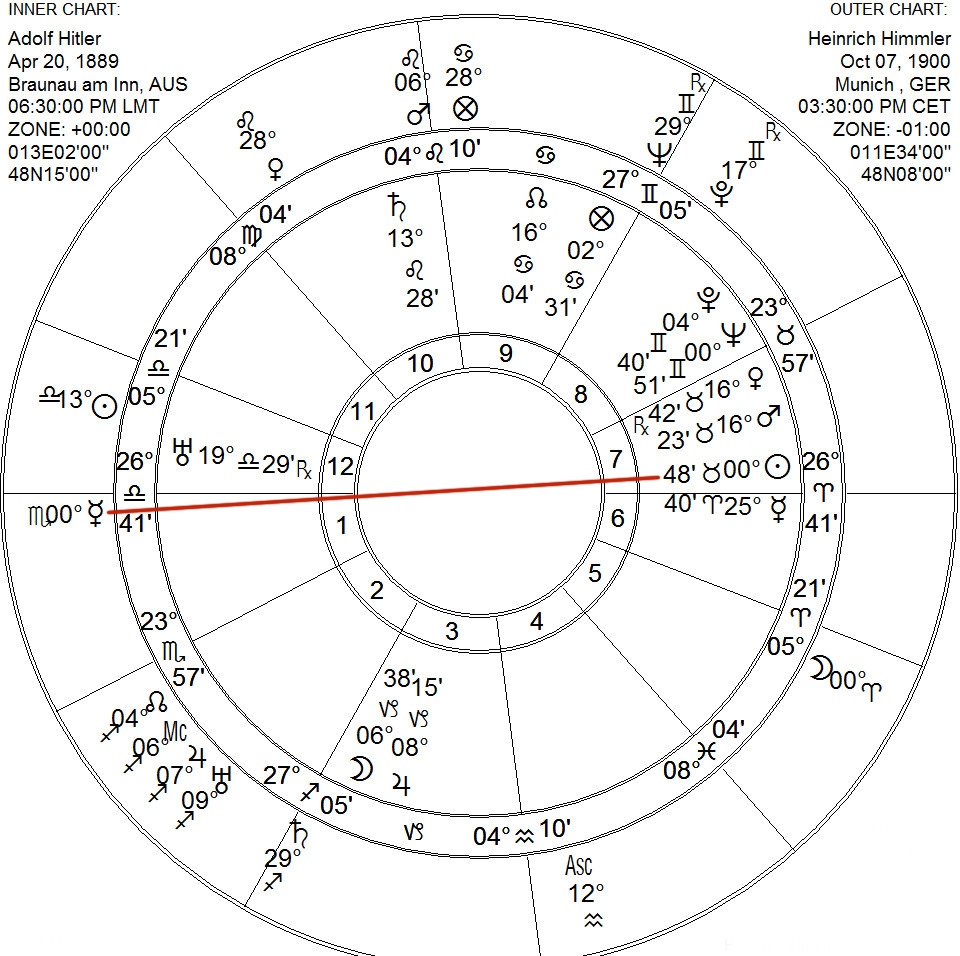 defines remote control: “A transmitter is a light emitting diode (LED) which is built into the pointing end of the remote control handset. The infrared-light pulses and forms a pattern unique to that button. The remote receiver recognizes the pattern and causes the device to respond accordingly.”

In a similar fashion, the planets play the role of the transmitter. Their intrinsic energy and reflected light transmit into the Solar System’s neighborhood a signal, that when received by life on Earth, is given the impulse to respond. The receiver acts in accordance to the original potentials of the planetary configurations of the birth or event horoscope. The birth horoscope is a blueprint “DNA” of the inner energy system of the person born at that particular place/space and time. It is supposed, that these energies are received into the human body through invisible wheels called Chakras.

Without corresponding receivers from one person’s chart to another’s, there is little likelihood that a close relationship will be encountered or encouraged. It is well know that Himmler disagreed with Hitler’s policies at times and so the two were functioning in quite separate mental and emotional fields of experience. Himmler however had a very strong bond with his doctor, Felix Kersten, who although fearful of relating to Himmler at the start, began eventually to take advantage of the relationship, and asked that the lives of prisoners be saved in exchange for his services to him as his doctor. The chart below shows the one very important contact of planets between the two individuals; the head of the SS and the doctor who massaged his patient’s abdomen to relieve excruciating pai 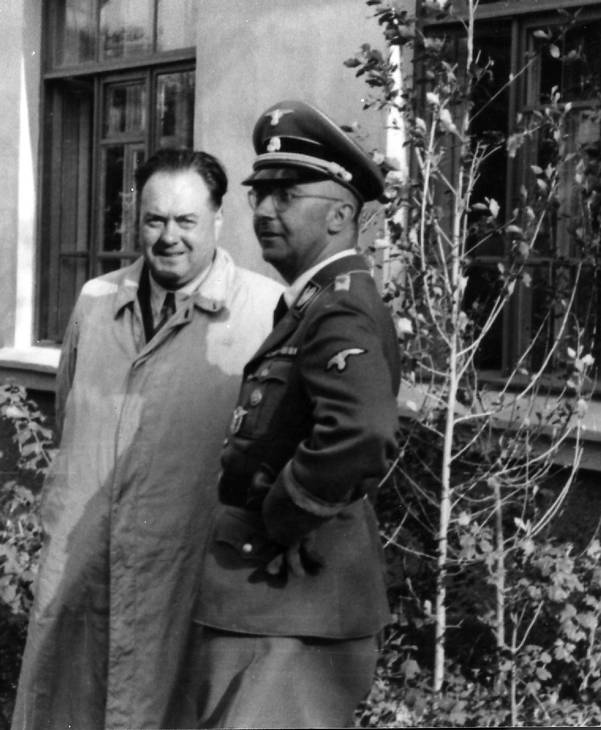 n. This service ultimately led to the saving of 60,000 lives that otherwise would have succumbed to the fate that befell millions of others. The Conjunction of Pluto and Mercury (both representing mind) makes this a more intimate interaction than the Opposition aspect that Himmler had with Hitler where they tended to polarize and react to each other.

The Conjunction between Kersten’s Mercury on Himmler’s Pluto in Gemini is significant. It shows that through the doctor’s touch of hand (Mercury ruled), the contact is made to a deep and memorable part of Himmler’s psyche. Himmler found that no other doctor that could alleviate the debilitating abdominal pains from which he suffered. Himmler became obsessed (Pluto) with his doctor’s miraculous healing method, and continually promised to grant the requests of his doctor as he pleaded for the lives of non-Jews and Jews during the war years of the Third Reich.

The power in the relationship is with Himmler because his Natal Pluto applies to Kersten’s Mercury. The ever-deepening contact between them developed into an extremely private relationship shown by the aspect’s position in the 4th house – base of operations. Going deeper, it can be seen that there was a meeting of minds (Mercury=lower mind and Pluto=subconscious mind) albeit in a very strange and intimate circumstance. 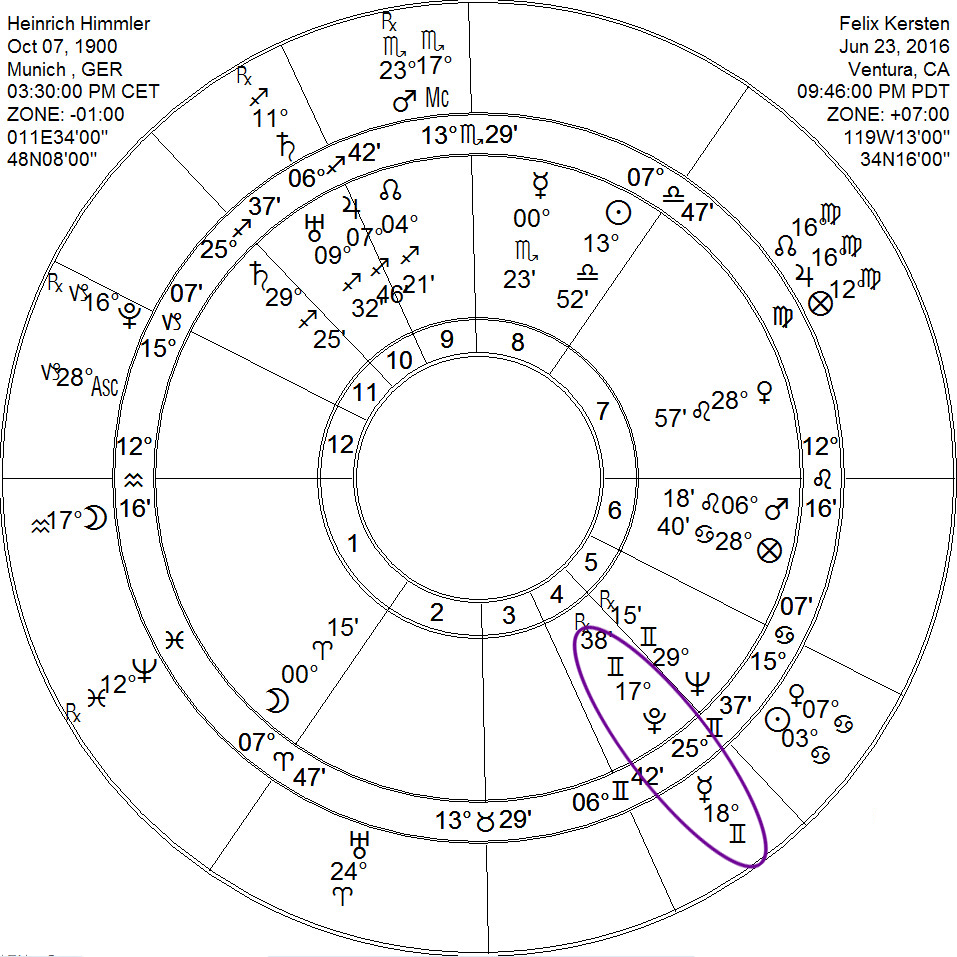 The interesting transcript below tells of a meeting that led to the saving of 60,000 Jews just before the end of WW2. Kersten influenced Himmler to make a very significant and clandestine departure from his perpetual and insidious path. Himmler is quoted by Kersten’s documentation to be at odds with Hitler’s wishes to go full force ahead in the annihilation of the Jews.

In part, it may be that the motivating force behind Himmler’s radical change of policy was inspired by his hope to negotiate with the Allies before the surrender of the German forces. Was this strictly an out-of-character move on his part, and an unexpected compassion rising to the surface of consciousness? Most likely it was a desperate act to save himself as the result of his foreknowledge that Germany was facing imminent defeat. Without a personal and honest testimony by Himmler himself, we will never know.

From link : http://www.astrotheme.com/astrology/Felix_Kersten     “Toward the end of the War, Kersten arranged a meeting between Himmler and Norbert Masur, a member of the Swedish branch of the World Jewish Congress, in Harztwalde, a few miles from Ravensbruck concentration camp. As a result, Himmler agreed to spare the lives of the remaining 60,000 Jews left in Nazi concentration camps days before their liberation by the Allies.”