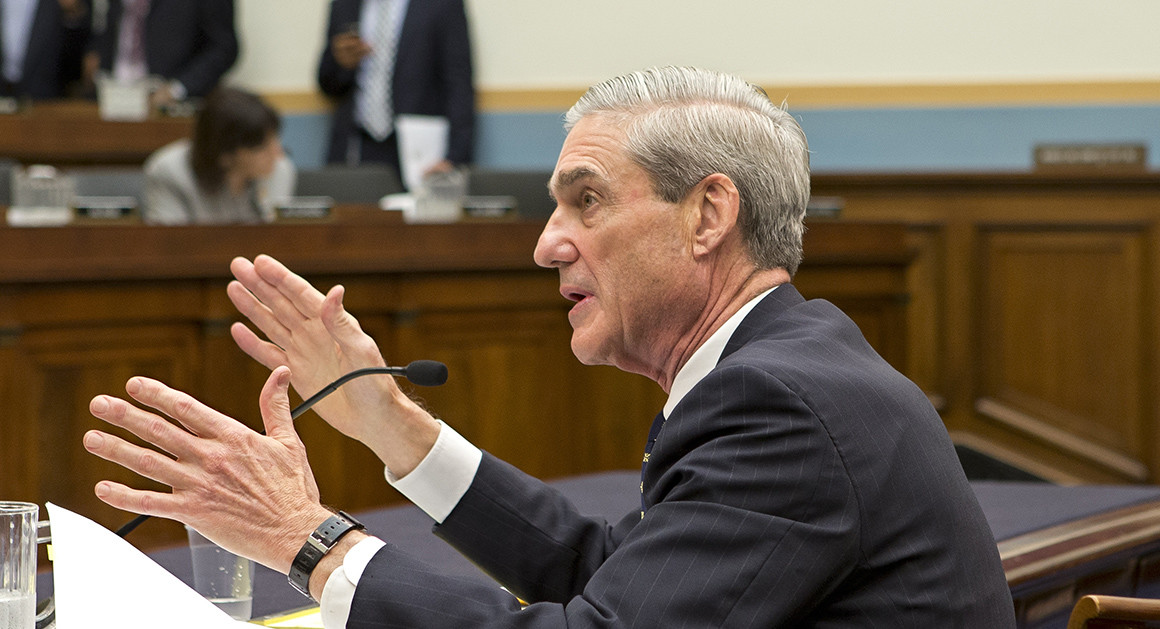 Sometimes a horoscope tells a fascinating story, and this is what we find in the chart of Robert Swan Mueller III, the man who was appointed as special counsel to investigate Russia’s interference in the 2016 U.S. presidential election.

An interpretation of natal potentials is compromised when the time of birth is unknown because the Moon degree and the positions of the planets throughout the houses are undetermined, and thus fall short of giving sufficient clues for an accurate interpretation. But there are planetary configurations defined by Marc Edmund Jones, found in his Essentials of Astrological Analysis, that are not dependent on the time of birth, and can yield information that is quite revealing. 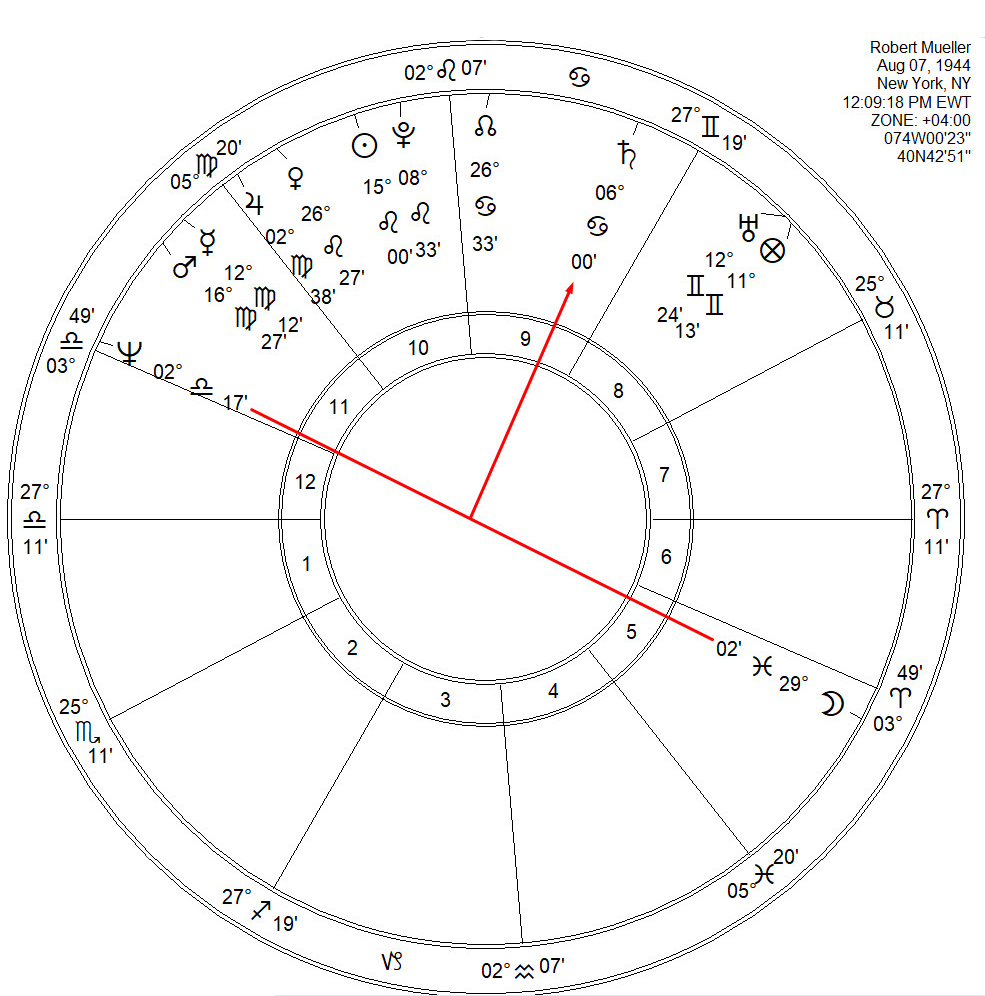 One of these possibilities is the T-Cross as a Focal Determinator. But its validity is questioned because one of the prongs of the Cross would be the Moon, which moves swiftly through the degrees in an entire day, and may or may not be in orb of an opposition to create a T-Cross. However, when checking the Moon’s sign and degree placement, throughout the 24 hours of the day of birth, it shows the Moon’s transit stays within close proximity of its 12 and a half degree allowable orb in the possible opposition to Neptune. This ultimately brings Saturn into Point Focus, since it stands in perpendicular aspect to the opposition.

Astrologers consider that aside from the frustrations, delays, and disappointments for which Saturn is known, it is also the planet of integrity, responsibility, maturity, and conscientiousness, and so suggests a host of positive characteristics that can imbue an individual with extraordinary and honorable stature. These constructive expressions of Saturn, explain why Mueller is known for his spotless reputation as a Marine Corps officer during the Vietnam War, who received a Bronze Star for heroism, and a Purple Heart. He spent his civilian years in both private and public service, engaging in a stellar career that included 12 years as director of the FBI.

Mueller’s chart is especially interesting because the Sabian Symbol degrees play a compelling role when telling his story.

There are three Sabian Symbol degrees in Mueller’s chart that refer to the first light of day or the Sun in general. When symbols contain similar imagery, they are supportive of each other and point to an emphasis on the native’s psychological patterning. These three supportive concepts in the chart are symbolic of the revelatory effects of light, as it illuminates hitherto unforeseen factors otherwise obscured by darkness. They are those that open the door to the powers of the shadow, as it is defined from a Jungian perspective. These references to light overcoming darkness or storm, confirm Mueller’s dedication to truth and lawfulness, and most of all, to his personal integrity that always overcomes the ever-present challenge of humankind’s propensity for wrongdoing.

The dawn of a new day, everything changed This is a symbol of the illimitable potentialities to be found when it comes to any personal participation in everyday affairs, and of the thoroughness with which each individual remains the recurrent expression of his own self-consistencies. There is here the necessity for an ultimate self-dependence, and the consequent need to blaze a path of special recognition for each particular characteristic of selfhood. The keyword is INNOVATION. When positive, the degree is man’s insatiable appetite for experiment, and continuing self-discovery in every possible area of human experience, and when negative, inability to catch the challenge of living in even the most trivial matters.

Daybreak This is a symbol of the cycles of change as an ultimate assurance to the human heart, with an emphasis on reason, as the means by which man knows the nature of his own continuance. No matter what may be the course of events in their over-all unpredictability, there is always dawn, or springtime, as the promise of resurgence, or a new potential in every manifestation of self and its world. Reality is ever a beginning in the sense of the immediacy it offers the individual. The keyword is GENESIS. When positive, the degree is an untiring capture and recapture of life throughout the constant and confusing shifts of being, and when negative, wishful thinking and satisfaction in a vague tomorrow.

The all-important Sun degree at 16 Leo.

Sunshine, just after a storm This is a symbol of personal stability through man’s recuperative powers, emphasized in terms of his psychological or inner orientation. Here is nature’s inevitable return to enduring values, as this occurs after every major issue of life, and the consequent opportunity for self to regrasp itself and to enlist every element of its environment in some new effort or fresh approach to experience. Everyday stress and strain are found of high use, either as a clearance or a reconstruction in all human affairs. The keyword is RECOVERY. When positive, the degree is exceptional steadiness of perspective and fidelity to individual responsibility, and when negative, continual upset over petty issues.

The Sun in any chart points to the PURPOSE of a person’s life. It is Mueller’s destiny to usher in the light, in answer to infractions that have held their sway over good. This he has done valiantly in his long career as a prosecutor and public servant.

One of the most delightful Sabian degrees taking part in the story of Mueller’s natal horoscope, is 7 degrees Cancer, Two fairies on a Moonlit night. Interestingly, this image brings the symbol of a moon into the foreground, to compliment the several references to the Sun in the chart. The symbol is prominent because it hosts natal Saturn, the Point Focus of the T-Cross.

Two fairies on a moonlit night. This is a symbol of nature’s illimitable potentialities on the side of the release she offers man from his physical or psychological involvement, and of the necessity that he achieve some measure of lightness in self-expression as a balance for the strain of everyday existence. Here is exaltation of fancy, as a dynamic factor in all self-realization, and of the quiet moments of experience as a real opportunity for self-orientation. The magic of selfhood lies in its ability to rise above whatever may threaten its well-being. The keyword is ASCENDANCY. When positive, the degree is a transforming sensitivity or a healing imagination. And when negative, a senseless retreat to make-believe.

A study of symbol definitions allows astrologers to penetrate deep within a native’s psyche to reveal the theme of the life on its most profound level, while planets in the signs and houses give suggestions of the life’s potentials. Cancer 7, accompanies a “handful” of otherworldly elfin degrees that take part in the Sabian Symbols’ collection of visionary imagery.

Planets, together with these special Sabian Symbol degrees, vibrate to a higher frequency and encourage the native to reach beyond the conventional expression of planetary energies. Robert Mueller’s chart is an example of the rich resources the symbols have to offer, buttressed by the dignified Point Focus Saturn, that expresses itself through a highly developed refinement of character, that in the past relied on once-respected old-school principles.

The following images are the group of elfin symbols, with a rounding up of the minutes to the next degree.

Aries 16, Brownies dancing in the setting sun.
Scorpio 23, A bunny metamorphosed into a fairy.
Scorpio 28, King of the fairies approaching his domain.
Cancer 7, Two fairies on a moonlit night.
Capricorn 26, A water sprite.
Virgo 5, A man dreaming of fairies.

The solar eclipse of July 2, 2019, at 10 degrees 37 Cancer, synchronized with the compelling presence of Mueller at congressional hearings where he confirmed the findings of his investigative report, that was disseminated but not widely read by the American public. The eclipse fell 4 degrees 37 minutes from Mueller’s natal Saturn, which brought into public view signs of his declining vitality, through his sometimes feeble responses to questions by House Representatives. The eclipse as well, intensified his demeanor and restraint, by landing within 10 minutes of the native’s progressed Saturn. 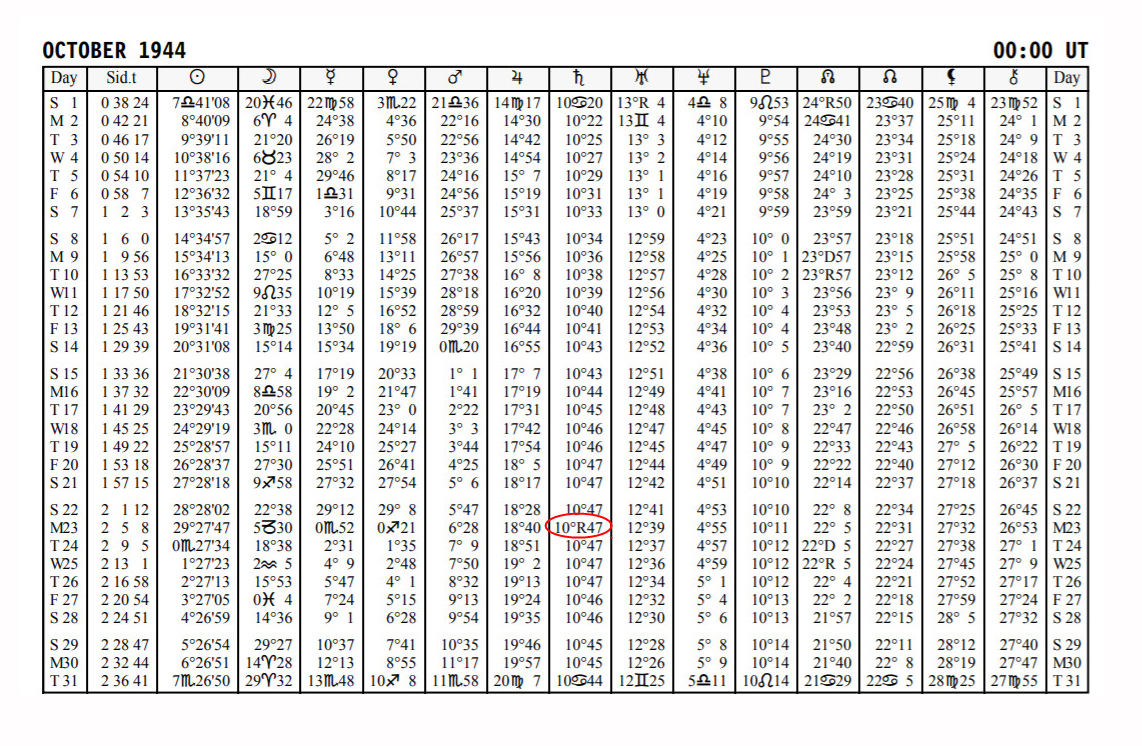 An ephemeris graph for October 1944 shows that Saturn is calculated to Station Retrograde in Mueller’s secondary progressions on February 15, 2021. The Station is counted 76 days after birth and corresponds with the native’s 76th year of life. Two important circumstances related to the Saturn station, are first, Mueller’s resignation from the Justice Department on May 29, 2019, because his investigation on election interference by Russia was completed, and second, his attendance at the hearings before the Intelligence and Judiciary Committees on July 24, 2019, that also may prove to be his last personal appearance before the public.

Both of these dates are well within the time period expected of a slow-moving progressed station. However, the station has not culminated as yet, and more details of his retirement and possible acceleration of physical limitations, indicative of the expression of Saturn, may be reported in upcoming years. In general, it could be said, that the entire two and a half year period of the historic investigation fits perfectly into the theme of a stationary Saturn. Going retrograde rather than direct points to the disdain for public comment and the general secrecy that surrounded the investigation as Mueller orchestrated it.

In his stoic appearance before Congress, Mueller was able to confirm the truth, that the report did not exonerate the president, but with quiet yes-and-no answers, with occasional enlightening comments, Mueller set the story straight, and in that way, starkly contrasted the President and Attorney General’s mantra, that there was “no collusion, no obstruction.” He furthermore confirmed to Adam Schiff, the Chair of the House Intelligence Committee, that the investigation was not a witch-hunt when responding to Schiff’s request for verification, that would ultimately counter the President’s habitual false accusation in that regard. 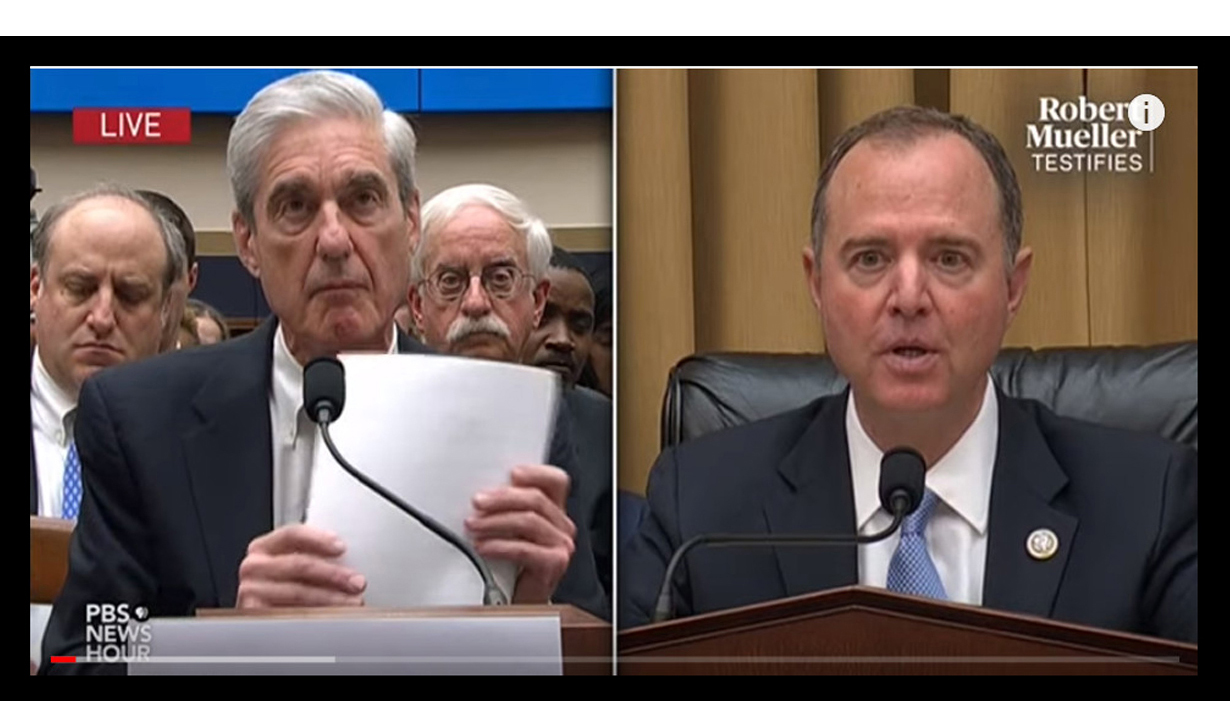 Mueller is a man who has maintained over time a reputation of unequaled integrity and wholehearted dedication to the precepts of American democracy. There were headlines criticizing Mueller for deliberately sticking to the “4 corners” of his report, and in answer to his own inquiry, he conceded to the written response from the Justice Department, compelling him to withhold information about on-going investigations. But these limitations are to be expected when Saturn takes center stage through its natal position receiving a recent eclipse, and its progressed position stationing retrograde.

Remaining within boundaries, and withstanding grave and perhaps undue criticism, is all in the jurisdiction of the Saturn function, and is unavoidable. One cannot manipulate planetary forces, but advantages do exist when noting any planet’s correspondence to everyday affairs and adjusting to them with humility and conciliatory attitude.

There was no drama or theatrics in Mueller’s manner at the hearings, and in contrast with Trump’s often bombastic and unrestrained hyperbole, Mueller seemed almost docile. But the man will go down in history as the person credited for documenting the unprecedented acts and intractable behavior of the Trump administration.

No doubt, Russia will continue to aggressively tamper with America’s central core of its democracy; the citizen’s right to vote. Point by point, Volume I of the “Mueller Report” openly lays bare how and what the Russians did in their manipulative interference of the 2016 presidential election, and outlines in Volume II, President Trump’s efforts to obstruct the Special Council’s investigation.

History will look back at these events as they outlined right as opposed to wrong, and truth as opposed to lies. And time will tell, if Mueller will be recognized for his distinguished and honorable investigation into the facts of the 2016 presidential election and whether the effort will have assisted in supporting the original blueprint of America’s constitution and its guiding principles.

“This is what is at stake; our next election . . . our democracy . . . This is why your work matters Director Mueller, this is why our investigation matters. To bring these dangers to light.”  –  Adam Schiff