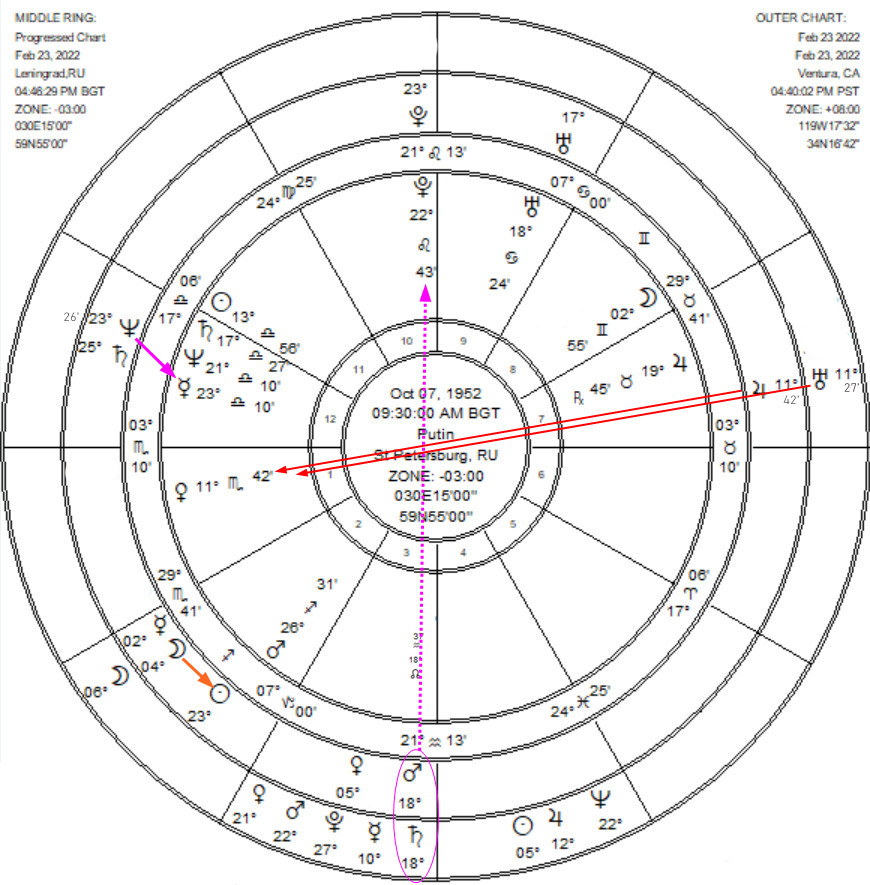 It is fitting that Vladimir Putin has several planets in and at the cusp of the 12th house because hidden operations were and still are the autocrat’s modus operandi. The Soviet Union’s KGB is typical of behind-the-scenes activity as the 12th house represents. Putin’s sixteen years of experience as a foreign intelligence officer laid the ground for his continuous political positions in the background of affairs and later in the public eye.

Putin’s planets in the 12th house relate to his clandestine plans to usurp his “enemies” by one means or another. He silenced the truth by taking over all Russian media and is known for his murderous attacks on his political opponents. His invasion of Ukraine holds the entire world hostage with the careless brandishing of his nuclear arsenal.  Yet he underestimated the resistance coming from the free world and Western democracies now united around a courageous Ukraine. Even numerous Russian soldiers have awakened to the fact they are hapless pawns in the autocrat’s ruthless attack on Ukraine.

The tendency to be self-deceived and the practice of deceiving others is easily seen by progressed Neptune conjunct natal Mercury, the planet of mind and communication.

Rarely do the outer slow-moving progressed planets merge in aspect with natal planets. When they do, attention surely must be paid. Neptune, in Putin’s progressions, is just minutes beyond its exact conjunction with natal Mercury. This dynamic (1) conjunction reveals his concentration on the Mercurial, detailed tactics going on deep within the dark recesses of his unfathomable subconscious. The progression is ultra-slow and points to the painstaking years of Neptune’s effects in the expansion of the native’s delusions of grandeur that is now coming out of the 12th house closet. 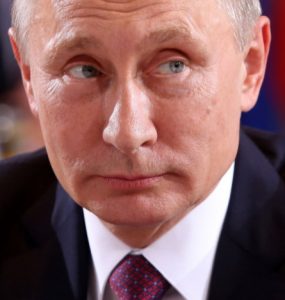 Neptune is often associated with the upliftment of spirit through faith and the belief in beneficent higher powers. The planet includes a concern for the welfare of the community along with a strong sense of belonging and wholeness. When negative, one can be lost in an impractical world where a clouded vision leads to escapism through drugs, alcohol, and at times through the opposite pole in an egotistical sense of superiority. Such is the case in this progression in the sign of Libra which normally is synonymous with balance and harmony. However, when out of balance, the sign is conflict-oriented and can be outright contentious. The authority associated with Neptune then becomes autocracy.

The 12th house reveals hidden enemies while the 7th house indicates open enemies in direct warfare. In Putin’s war, Neptune is associated with a capacity to fabricate outlandish deceptions and lies to control the narrative about the intent of the use of force that led to the open attack on Ukraine. The autocrat sowed confusion among his military forces and planted propaganda in the vulnerable minds of Russian citizens.

Progressed Mercury station turning direct in 2016 (see ephemeris graph below). Corresponding to this forward-going indicator is the invasive interference with the US presidential elections of the same year. The green line underlines the present age of the native. The red circled station-direct of Mercury, at 0 Sagittarius 16, is clear astrological evidence of Russia’s infiltration through cyberspace of the US presidential elections documented in the Mueller Report. (2)

In their negative manifestation the progressed and transit aspects, active on February 24, 2022, drove Putin out of his 12th house subjectivity and onto the 7th house battlefield. Progressed Jupiter, at the onset of the full-scale invasion, was exact to the minute at 11 minutes and 42 seconds in opposition to natal Venus. The intensified polarization, of the normally benefic planets, activated the wide orb T Cross to Pluto at the midheaven. This initiated an act of Plutonian domination in its most destructive manifestation that shook the world to its foundations. This tension-producing progression was further amplified through the transit of agitating Uranus applying in conjunction with it and in opposition to Venus within 15 minutes of exactitude.

A focus on the Nadir also shows a combination of dynamic aspects working together in conjunction with the North Node. Transit Saturn and progressed Mars were both conjunct the North Node in the initial days of the invasion. Both are edging ever closer to an opposition to elevated Pluto. Saturn acts in a more immediate way because the transit moves far faster than progressed Mars. Transit Saturn moves on to oppose natal Pluto on April 9, 2022. It stations to go retrograde on June 5 at 25 Aquarius 15 and returns to an opposition to Pluto in early August. On October 23 it goes direct opposite Pluto at 18 Aquarius 35. In late December 2022 – early 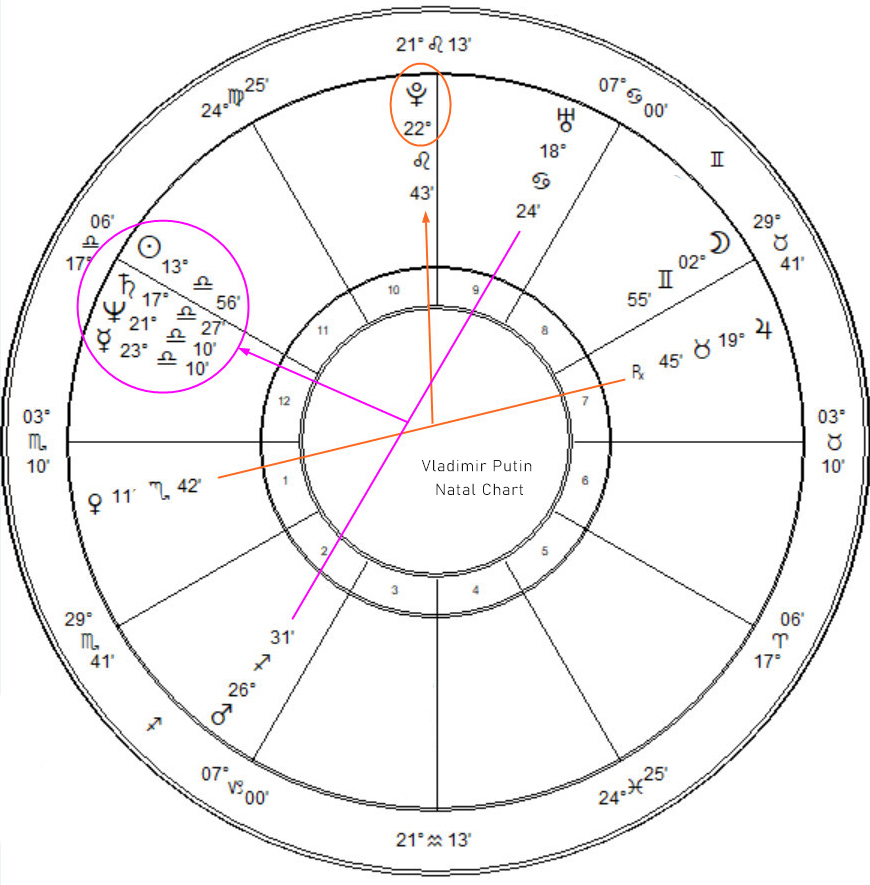 January 2023, Saturn is exact again in its final opposition in the series of tense aspects with natal Pluto. Saturn’s proximity to Putin’s 4th house cusp brings attention to the establishment of new territorial boundaries.

The longer-term progressed Mars follows Saturn’s advances but takes approximately four years to complete. First, it will enter Putin’s 4th house before it reaches its ominous, exact opposition to natal Pluto due in 2026-2027 (see Dec. 1952 ephemeris). This is highly significant because Pluto is the natal Point Focus of the T Cross between the foundational opposition of Venus and Jupiter. Pluto becomes the opposition’s outlet for any stresses and is intensified by it being elevated and in a very tight conjunction with the Midheaven. These factors make Pluto High Focus as well Point Focus. For someone in politics wanting to make a great impression on the world, this is Putin’s greatest ally. Unfortunately, the use of his powers has been for the suppression of rights and freedoms of the people he rules and leads to the capacity in its most negative expression as the instigator of brutal slaughter imposed on innocent men, women, and even children.

As the surrogate leader of the Russian Federation, everyone in the country is subject to Putin’s chart with its planetary aspects. They must experience along with him the constructive initiatives he has put into action that improved the economic situation in his early political career, but it also points to the people inheriting the effects of the extreme sanctions now placed upon the country as a punitive measure. A sudden rise to power followed by a great fall often is the signature of Pluto at the Midheaven.

The potential for a fall from power could be anticipated with transit Saturn on its way in opposition to natal Pluto. Or at the very least a loosening of the grip of an uncontrollable obsession with power which is the signature sign of a Pluto gone awry. A more enlightened leader could have used the planet’s transformative qualities to guide his people toward a truly inspiring way of life and dedication to truth. However, in Putin’s case, the direction his leadership has taken has been a spiraling down over the years to the end where coming out of chaos may be impossible under his rule.

The Sabian symbols shed great light on the inner workings of a native’s psyche. Saturn in the natal horoscope is in close connection with Putin’s natal Sun, making for a hypersensitivity that compensates through sheer shrewdness that results in building a fortress of justification aimed at the protection of the self. Under the veil of confidence, there is a suggestion of guilt in the consciousness as shown by Saturn’s symbol Libra 18, Two men placed under arrest. There is the possibility that during the Saturn transit, accountability could be enforced for the war crimes Putin perpetrated against the people of Ukraine.

The keyword for Libra 18 is CONSEQUENCE. When positive, the degree is a heightened challenge to every special talent, and when negative, total inappropriateness of impulse and act.

As transit Saturn comes to its conjunction with the Nadir throughout 2022 and into 2023, the traditional 4th house “End of the Matter” may take hold. Especially while there is the opposition to natal Pluto with attention existentially on Putin’s war crimes by a world fully conscious of his abominable acts.

A supportive and powerful, astrological indication for the possibility of a dramatic outcome and finale for Putin’s atrocities is the imminent Progressed Lunation exact on July 31, 2023. It is normal for a Progressed Lunation to indicate an extreme life-redirection. The actual time-orb of influence of the progressed to progressed Lights is a year and a half before and after the actual exact aspect. Considering its wide orb allowance, Putin’s future is already being influenced by this dynamic aspect foretelling a great transition.

The meeting of the progressed Lights marks the completion of a past cycle, ultimately making way for the beginning of the next. The unexpecting native will encounter a need to leave behind patterns of behavior to which he is accustomed, and to go forward with what is likely to encompass a vague and unpredictable future. The aspect list shows the core dates of the second of the three possible Progressed Lunations that can occur in Putin’s lifespan. 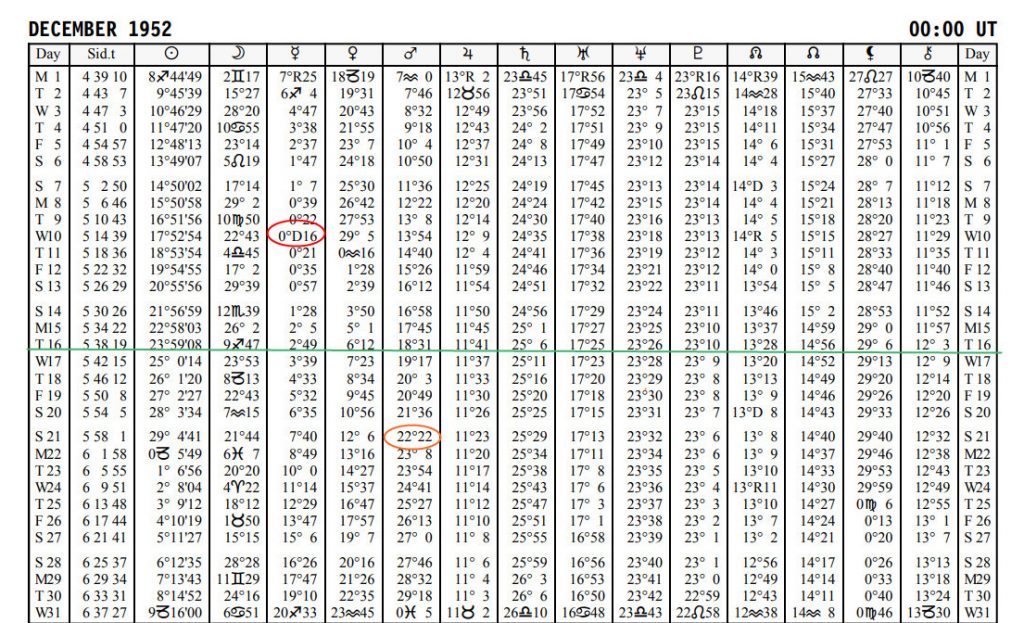 The progressed Lights are traveling through Putin’s 2nd house of economic affairs revealing that the heavy sanctions, among other factors, placed upon the country may very well be his and his country’s downfall. This is an objective crisis associated with the dynamic Lunation revealing one of the serious life-changing circumstances Putin and his people are destined to encounter.

Circled in orange in the ephemeris graph of December 1952 shows progressed Mars pointing to when in four to five years the ominous opposition to Pluto will be exact.  Mars in its natal expression is very telling in its Sabian symbol Sagittarius 27, A sculpture.

The keyword for Sagittarius 27 is IMMORTALIZATION. When positive, the degree is exceptional self-expression through a gift for building all experience into a personal fulfillment, and when negative, callous impersonality and overambitious pretensions.

Here, it is likely that any immortalization will reflect the negative expression of the Mars degree. In lieu of a more positive manifestation of the chart, we have a tragic waste of life potentials shown in this otherwise extremely promising horoscope with two T Crosses*, one to the powerful, elevated Pluto and the other to a stellium that includes the natal Sun. In place of enjoying a gratifying summation of his life’s work, the dictator leaves a deep and unfortunate footprint of havoc behind him in the world. Putin’s reputation is forever tarnished and he will go down in history as one whose evil acts brought him his own demise, and at the same time lifted his adversary, Ukrainian president Volodymyr Zelenskyy, to the status of a hero. Putin managed to unite almost the entire world against him, all for what the negative expression of his Pluto Sabian symbol lays bare. Leo 23, A bareback rider. (3)

The keyword for Leo 23 is AUDACITY. When positive, the degree is uncompromising courage in the everyday business of living and a carefree assurance in meeting the problems of a modern society, and when negative, idle self-display and intemperate desire for applause.

(1) Dynamic Aspects are the transits and progression of the planets as they activate the natal chart’s configurations.

(2) Full title: Report On The Investigation Into Russian Interference In The 2016 Presidential Election

(3)  Blog post discussing Putin’s Pluto degree and his relationship with Donald Trump in connection with their conjunction between Putin’s Saturn and Trump’s Jupiter:  http://planetarydynamics.com/2018/09/29/putin-and-trump-the-symbol-minded/

*Two T Crosses shows the native’s tendency to shift from this to now that focus, often confusing observers of this capacity to switch on and off and appear inconsistent.