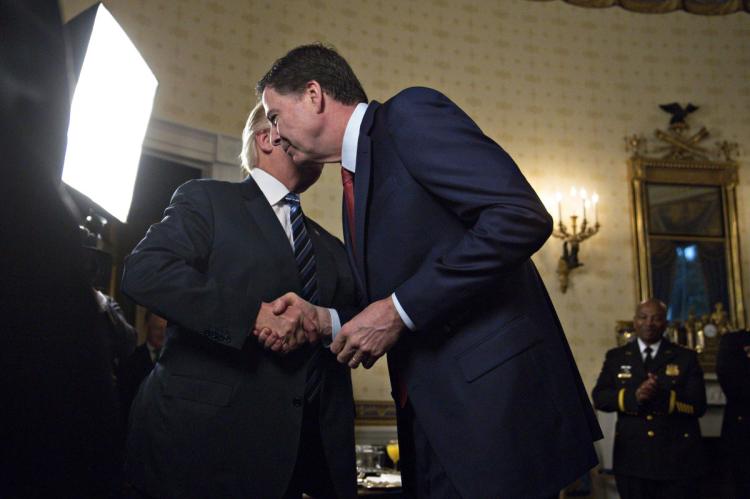 Seems the bromance has ended before the exact Transit aspects can take hold August 2017 that “promise” more intense events. On May 9, 2017, Trump fired FBI Director, James Comey, and thus set the stage for an even broader probe into the interference of Russia in the 2016 US elections. It looks a bit suspicious that the firing of the Director came at a time when subpoenas were being issued for records relating to Michael Flynn, the former national security adviser. Is Trump, in a transparent way, trying to obstruct justice?

Here is a quote from The New York Times, May 9 edition:

“In a sign of the F.B.I.’s intense interest in Mr. Trump’s advisers, a grand jury in Virginia issued subpoenas in recent weeks for records related to the former White House national security adviser, Michael T. Flynn, according to an American official familiar with the case. Mr. Flynn is under investigation for his financial ties to Russia and Turkey. Grand jury subpoenas are a routine part of federal investigations and are not a sign that charges are imminent. It was not clear that the subpoenas, which were first reported by CNN, were related to Mr. Comey’s firing.“

Chart 1 shows Trump’s Natal horoscope in the inner wheel with Comey’s Progressions for May in the outer wheel. Shown with the purple arrow is an aspect that “follows the money.” We can see that Comey’s Progressed Venus is in the 8th house of joint financial dealings, directly opposite Trump’s Natal Neptune in the 2nd house of personal finances. Neptune in Trump’s 2nd house points to the smokescreen he nurtures to obscure his unfulfilled promise to reveal his tax returns, and his unwillingness to discuss the reality of his business connections with Russia. It is important to point out that political officials, including the president of the United States, engaging in personal and financial connections with Russia puts the entire country at a security risk. Their clandestine involvements and investments makes them vulnerable to pressure or blackmail. This is precisely why General Michael Flynn was fired. It’s counterproductive, not to mention that the US and Russia are adversaries.

Astrologically, Comey’s focus on Trump’s 2nd house circumstances is obvious, and his Progressed Venus shows that the inquiry into Trump’s business transactions is/was already well u 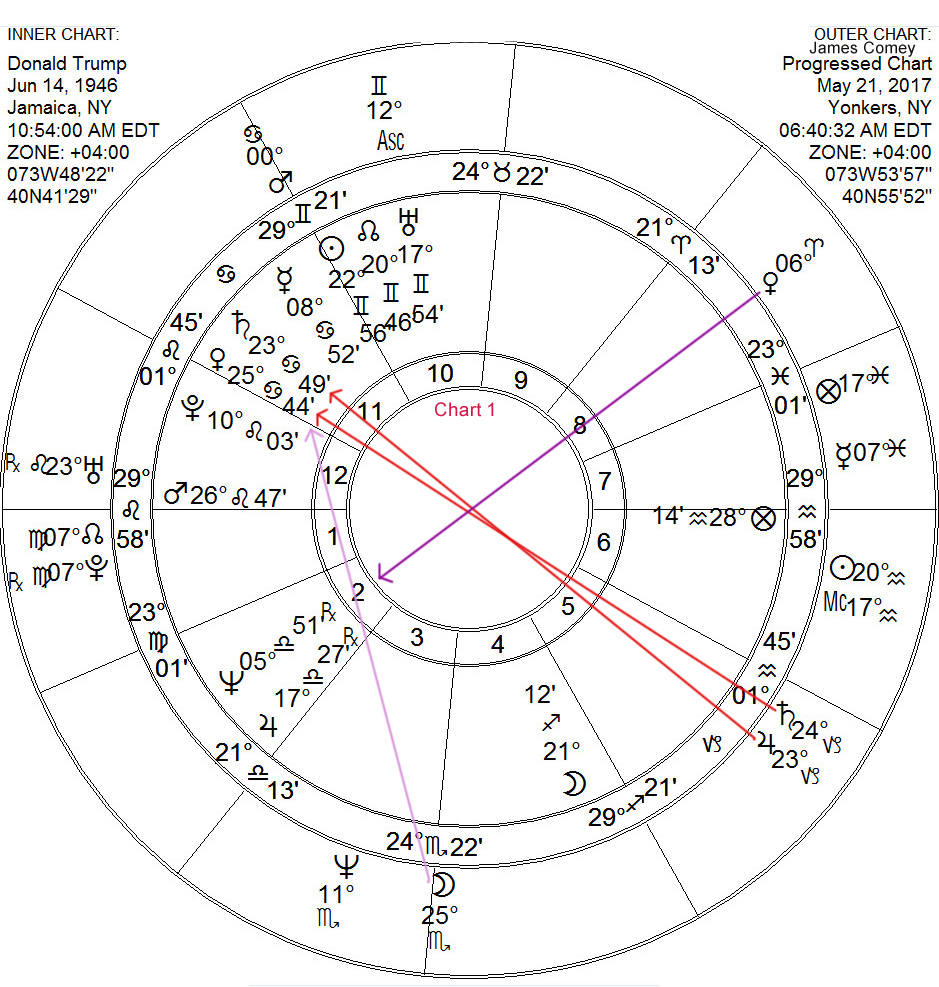 nderway. This is clear by noting that Progressed Venus is passed the exact aspect. Oppositions are penetrating and polarizing, and Comey’s Progressed Venus in Trump’s 8th house of other people’s resources corresponds to the dogged probe to uncover the truth, and exacerbates the conflict between the two men. Trump’s Neptunian sense may very well have intuitively alerted him that Comey was hot on his trail, albeit in the smooth manner with which Venus expresses itself even when confronted by a challenge. Venus takes approximately a year to move in and out of a Progressed aspect.

There are also Oppositions between Comey’s Progressed Jupiter and Saturn to Trump’s Natal Saturn and Venus shown by the red arrows. Oppositions with Saturn are highly sensitive, and it looks like the two have been deeply concerned and entangled in a “love”/hate dynamic for awhile. Ending the FBI director’s career on May 9th was Trump’s way of breaking the tie in the hopes that the investigation would go away. But the interaction between the two is not over, as there is more to come in August 2017 when astrological factors increase, for Trump, Comey and the country as a whole. The Aspects include the Total Solar Eclipse across the face of the United States on August 21, and the Station of Saturn Conjunct Trump’s Moon and Opposite his Sun on August 26.

Chart 2 shows very strong Aspects with planets that have an even more powerful effect on the situation then the planets that were active during the time of Comey’s firing.

Not very easy for Comey, is Transit Pluto coming to rest on his natal Saturn in August (shown in the purple circle at the bottom right of the chart). The Squares from these natal and Transit planets put pressure on and activates Trump’s natal Jupiter in the 2nd house. Curiously, Jupiter’s Sabian Symbol degree of 18 Libra is, Two men placed under arrest. It is most likely that Comey’s irritation at being so gruffly handled sets the Squares to work trying to reveal incriminating evidence and bring criminal charges against this president. The Squares act in covert fashion, as opposed to direct confrontation characteristic of Oppositions.

It is also important to remember in regards to the activation of Trump’s Jupiter that it is in Square to its planetary pair Saturn and reveals a SHARP DESTINY.*

The eastern angel of the chart shows Comey’s natal Uranus “rubbing up against” and irritating Trump’s natal Mars – suggesting Trump’s vulnerability to anger through this interaction of cross-planets. An activation of this shared potential is due in late August when there is a Mars Return for the president. Out of the darkness of the hidden 12th house activity, may arise the information that Comey so radically desires to reveal.

At the top of the chart is shown a very stressful Opposition taking place between Trump’s Progressed Uranus and Comey’s Natal Sun at 21 Gemini 18. This brings to the fore and electrifies the head-butting and ultra-challenging Opposition of their Natal Suns. This is a direct conflict and confrontation of Wills, even though the Suns are in compatible elements. This type of Aspect, although magnetically drawing the two individuals together, also gives a keen and sharp awareness of each other’s PURPOSE, which in this case is diametrically opposed in their objectives. As well as being such a profound player in the aspect between the two individuals and their goals, the Progressed Uranus is also directly Conjunct Trump’s own Natal Sun, giving him that bigger-than-life, radical, iconoclastic and sometimes bombastic manner and approach to his presidency. Trump’s Progressed Uranus will be Conjunct his Natal Sun for the duration of his term in office as president of the United States. If he has only one 4 year term or is impeached for any reason, the Progression will follow him into his private life. Freedom is an attribute of Uranus. How long will he be in office? 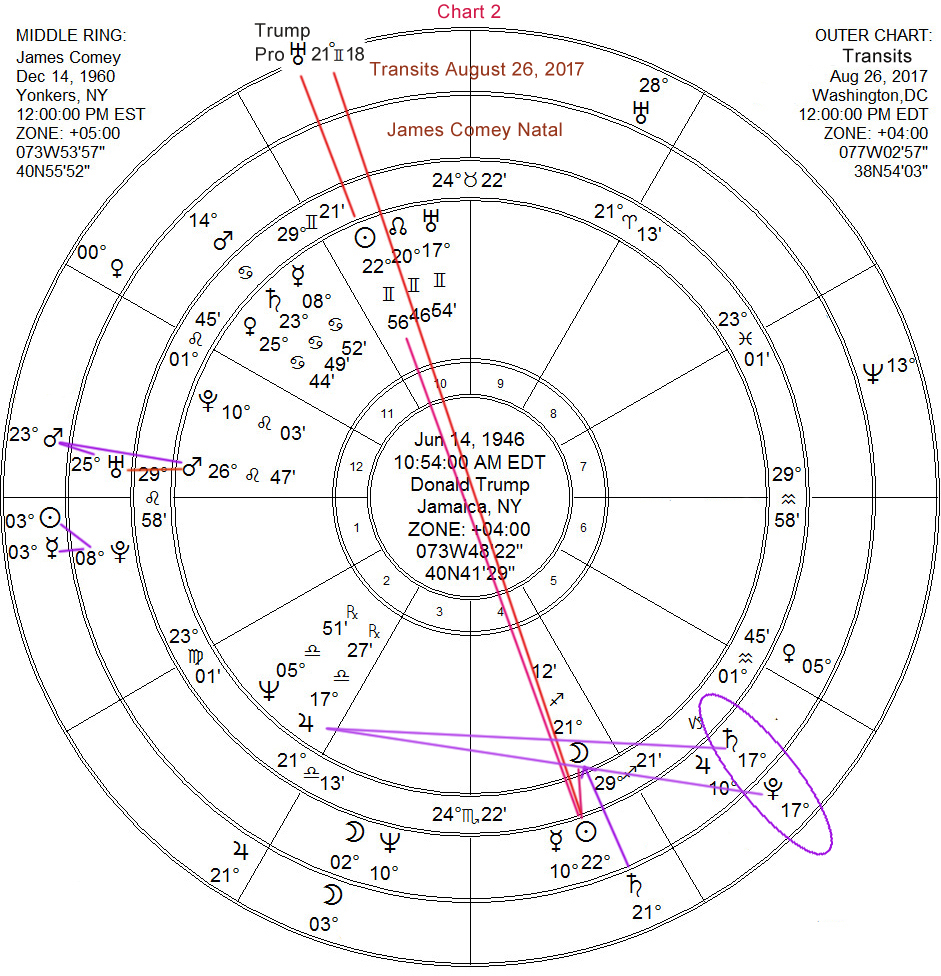 Now that James Comey is no longer at the helm of the FBI, there is a candidate, Joe Lieberman, waiting in the wings to possibly take that now empty position. And Trump is attracted to Lieberman as a substitute for Comey, because he is aware of the gracious connection between Lieberman and his former national security adviser, Michael Flynn. We know this because Lieberman wrote a thoughtful and supportive testimonial for the first page of Flynn’s book, The Field of Fight, published in 2016. The two men obviously know each other and this acquaintance just might make for a more amiable interaction between the head of the FBI and the former security adviser who is now about to be “called on the carpet” because of recent subpoenas. 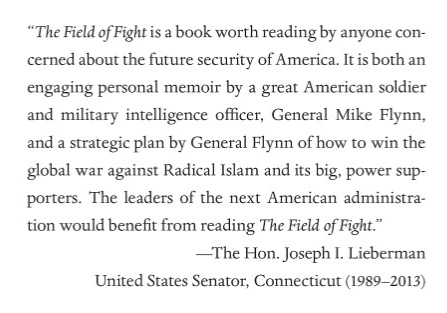 UPDATE: Because of controversial issues, Lieberman is no longer a candidate for the directorship of the FBI.

It’s possible that the big changes in Comey’s life are related to the Progressed Stations of Neptune and Mercury coming in the near future for the now unemployed civil servant. The blue highlight in the graph shows Comey at age 57 corresponding to year 2017. Neptune is already in the throes of a great turnaround, ultimately due in 2019. Neptune has such a slow orbit that there is no doubt that this is one of the factors carrying out transformation in Comey’s daily life even though 2 years away from absolute standstill before turning Retrograde.

Comey’s Progressed Mercury will go Retrograde in 2021 and will undoubtedly mark the time of a consciousness turning inward with the result of a more comprehensive understanding of life at the time he was so high profile. These important Stations, as well as the Transits in the offing, indicate a still very involved and lively career in store for the honorable, but sometimes dubious and very emotional ex-FBI Director. His Leading and emotionally charged High Focus Mars, in the already emotional sign of Cancer, reveals its intensity through his speech and mannerisms which can easily be witnessed through his testimonies at several Senate hearings shown on YouTube.

* “Jupiter and Saturn in square aspect indicate an ordering of life’s fundamental motives through which the native usually suffers very immediate consequences of even the least neglect or abuse of his own potentials. He finds he must fight continuously for the ideals in which he has come to take the most consistent interest, and also learns that his conscious well-being is wholly dependent on the moral struggles in which he becomes involved almost inevitably at every stage of his experience. . . . . Personal existence under this configuration can become either a great opportunity or else a gradual disintegration of the soul in the very core of itself.” (page 124, Essentials of Astrological Analysis)