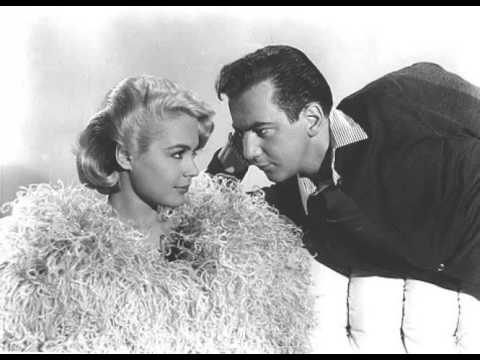 In a comparison of birth charts for famous couples, it is important to know the exact birth time. What is more difficult is when the year of birth is disputed. This is the case with Sandra Dee, the actress known for her role in the Gidget series created in the late 1950s.

From Wikipedia:
There has been some dispute as to Dee’s actual birth year, with evidence pointing to both 1942 and 1944. Legal records, including her California divorce record from Bobby Darin, as well as the Social Security Death Index and her own gravestone all give her year of birth as 1942. In a 1967 interview with the Oxnard Press-Courier, she acknowledged being 18 in 1960 when she first met Bobby Darin, and the couple wed three months later. According to her son’s book, Dee was born in 1944, but, having begun modelling and acting at a very young age, she and her mother falsely inflated her age by two years so she could find more work. According to this version, this explains why 1942 was listed as her birth year in official studio press releases. It does not however explain why her gravestone, which had to have been commissioned by her son, her only child and sole immediate survivor, gives 1942 as her year of birth.

In the chart comparison here, 1942 is used for the reason that one of the possible charts had to be chosen. There are very interesting connections however with planets between their charts using the 1944 birth year. And those are special for revealing a promise of a loving tie between the couple where the 1942 date is lacking. The charts shown are simply a peek into the possibilities of shared potentials, leaving the reader to decide which chart for Dee make sense and which does not.

The two charts below show the couple with the September 1960 Progressions when they met and married. The Progressions of each native are in the outer wheel. 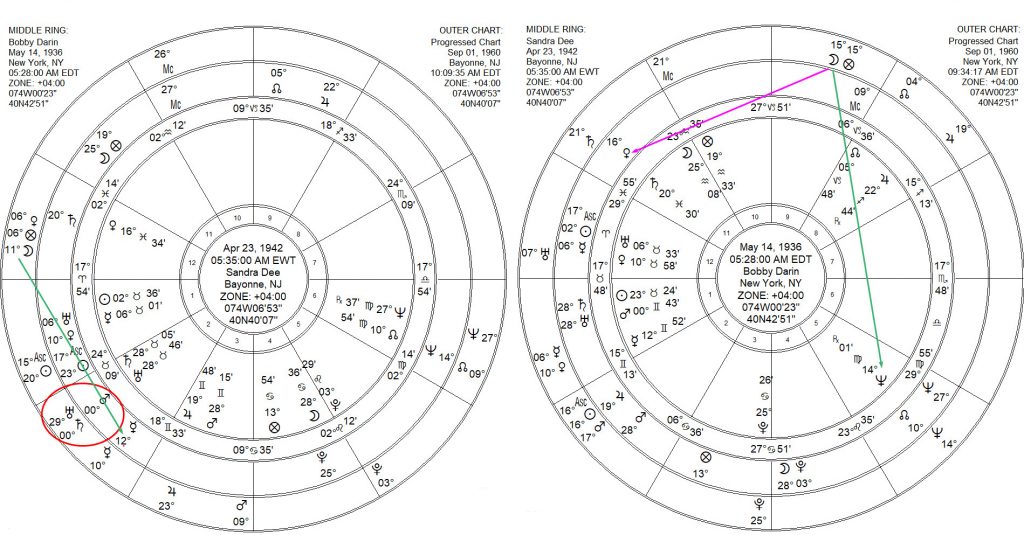 Dee’s chart in the center left wheel is calculated for 1942. She does not have Progressions in 1960 making aspects to her own natal chart. Her Progressed Moon does make a Sextile to Darin’s natal Mercury (shown with the green line) and her Progressed Saturn Conjuncts his natal Mars (shown with the red circle). This indicates that she indeed “turned him on” but as the story goes, was shy and reserved for sometime before acquiescing.

Darin’s chart in the center wheel on the right, shows his Progressed Moon in September 1960, making a Trine to his natal Neptune in the 5th house. This is the start of a movie career which Neptune well exemplifies by its placement in the 5th house of entertainment. At the same time, Darin’s Progressed Moon makes a Sextile to Dee’s natal Venus – the “sign” of a lovely entrance into a rewarding relationship. 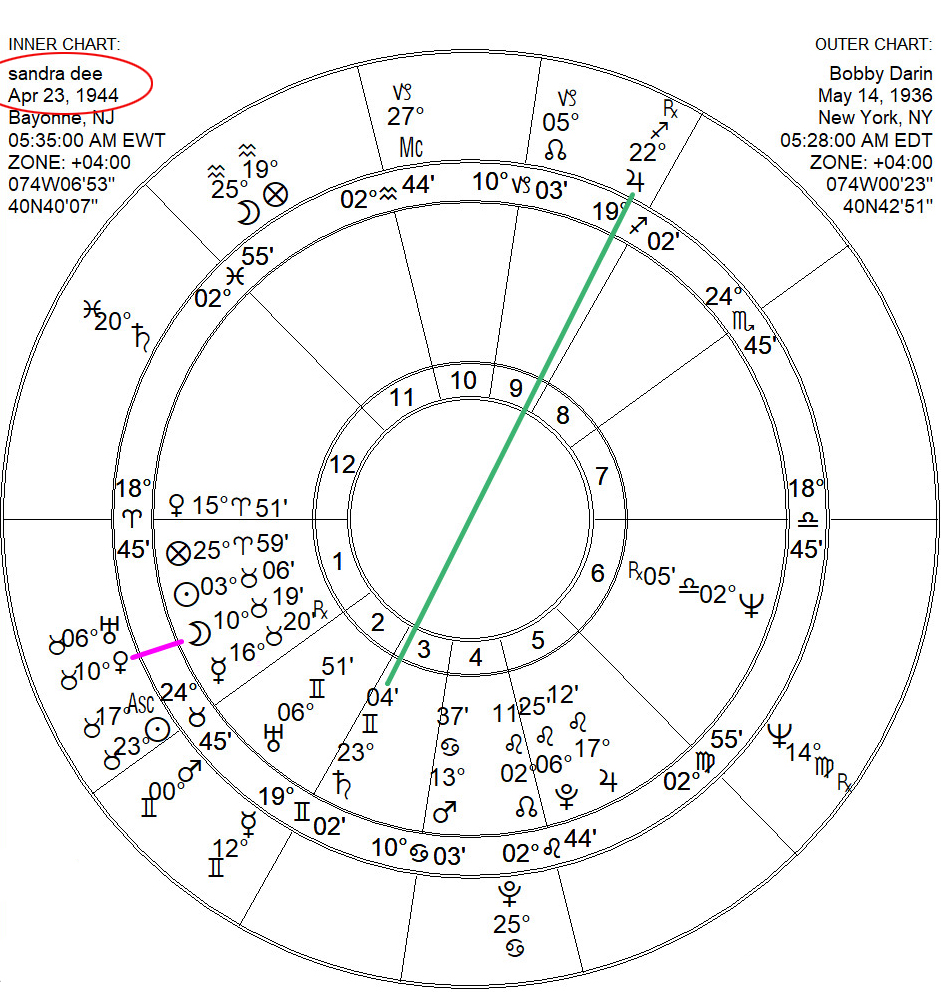 Dee’s possible 1944 birth chart, in contest with that of the 1942 birth year, has the awesome promise of a Conjunction of her natal Moon with Darin’s natal Venus, shown by the short purple line on the left. That is a powerful potential for attraction and a blissful connection. There is also the Natal Jupiter on Darin’s part making an Opposition to Dee’s Saturn. Saturn again is activated to reveal the hesitancy she expressed in the relationship’s beginnings, but also tells of her long-standing dedication to Darin in marriage and after his early passing. Dee never remarried, and that is testimony of the deep and abiding love that remained in her heart although they divorced in 1967 when Darin’s Progressed Mars Opposed his natal Jupiter in the 8th house of share resources.

Sandra Dee was known for her retiring early, a dependence on alcohol, and with an inability for drawing herself out into the public. This makes sense in the chart for 1944, with its lack of Opposition aspects and the presence of a Retrograde Mercury – both indicators of potentials for brooding, introversion and withdrawal. Neptune off by itself in the 6th house of possible health issues, and difficulties with adjusting in society, is another indication of the validity of the 1944 chart. But you decide . . . 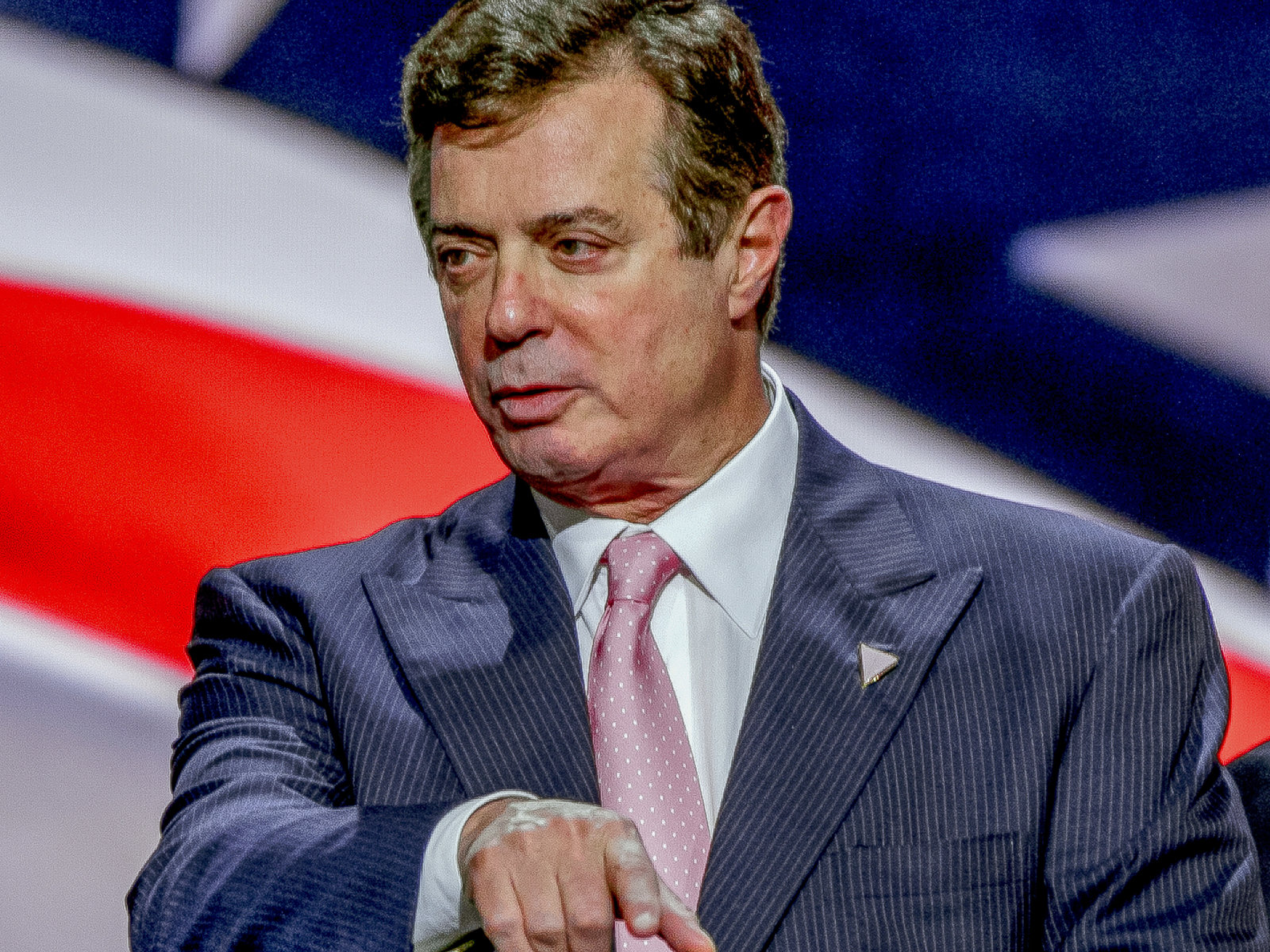 Paul Manafort was Donald Trump’s Campaign Manager for a brief period of time during the 2016 presidential elections. Since then his name and reputation have been on the line, and he has been under investigation by the Robert Mueller team, who on July 26, 2017 forcefully entered Manafort’s home and confiscated files that may be evidence of wrong-doing either the time before, during or after the Trump campaign. 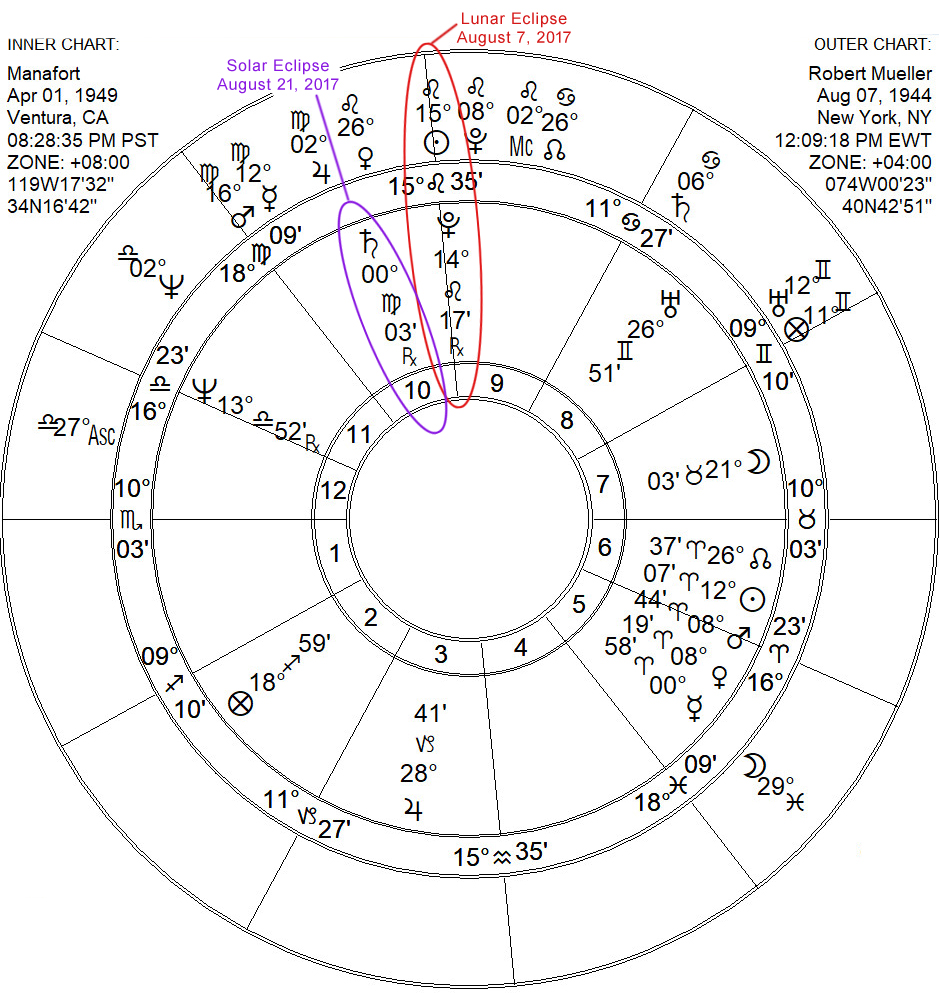 Looking at Manafort’s Transits and Progressions does not show obvious correlations to his natal chart, especially without knowing the birth time. However, there is significant activity in his life events at this time when relating them to both the Lunar and Solar Eclipses in August 2017. Paul Manafort’s Saturn and Pluto were touched by Conjunction by these two important eclipses; Pluto on August 7 and Saturn on August 21.

Astrologers often minimize the effects of an eclipse in chart interpretations, not intentionally, but because these Solar and Lunar events occur less often in Transits than the usual and more frequent planetary contributors.

What makes the Lunar Eclipse in Manfort’s chart serious is that Robert Mueller’s natal Sun is Conjunct Manafort’s natal Pluto. It is a cross-tie between the charts that is not to be ignored, because it gives Mueller’s Purpose in this planetary connection easy access to penetrate deeply and shine light on any possible deviant behavior that often is associated with a Pluto going rogue.

If not manifesting on the higher levels of spiritual awareness, Pluto’s influence can degenerate into underworld activities associated with money laundering, prostitution, illegal gambling, and a host of other involvements that shun the light of day. An eclipse is notorious fo 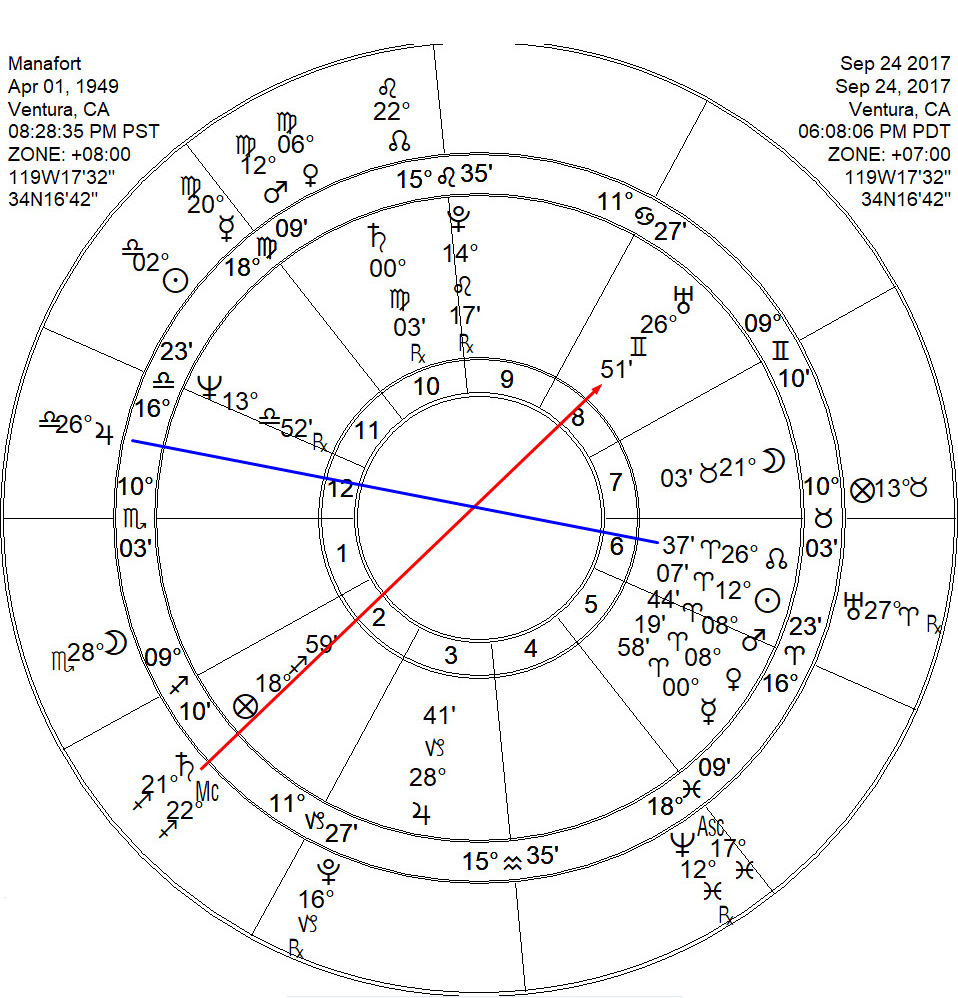 r bringing things to sharp focus in one’s life, and both men are indelibly connected through the powerful Pluto, Saturn and Sun Conjunction stimulated for the duration of the eclipses’ influence.

TRANSITS and the FUTURE ECLIPSES:

On or around November 23, 2017, Transit Saturn will make an Opposition to Manafort’s natal Uranus. This may be the time of indictment if indeed the situation calls for it. Or if indicted before that time, it could indicate when Manafort may be pardon by the President. There will at least be some significant issue arising at this time.

On January 31, 2018, there will be a Total Lunar Eclipse at 11 Leo 37 that is within orb of a Conjunction with Manafort’s Pluto and Mueller’s Sun. The accompanying Partial Solar Eclipse is on February 15, 2018 at 27 Aquarius 08 within orb of an Opposition with Manafort’s Saturn. The future promises more activity in reference to those most potent planets for change and retribution. If there hasn’t been a conviction or pardon as yet. This could be the time where that might happen. 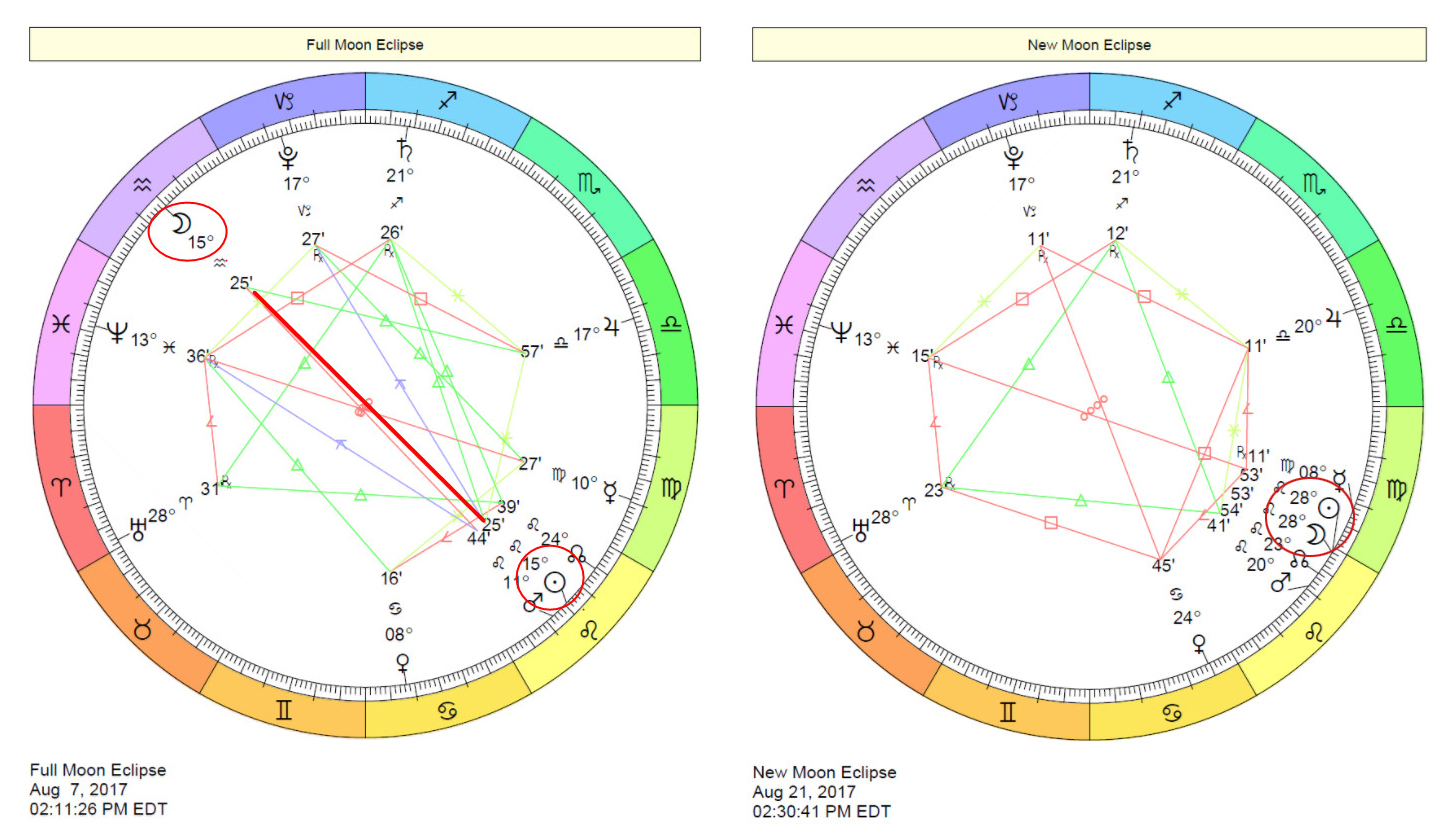 Manafort often lobbied on behalf of controversial foreign leaders such as former President of Ukraine Viktor Yanukovych, former dictator of the Philippines Ferdinand Marcos, dictator of the former Democratic Republic of the Congo Mobutu Sese Seko, and Angolan guerrilla leader Jonas Savimbi. Lobbying to serve the interests of foreign governments requires registration with the Justice Department under the Foreign Agents Registration Act; however, as of June 2, 2017, Manafort had not registered. On June 27 he retroactively registered as a foreign agent.

Manafort is under investigation by multiple federal agencies. The Federal Bureau of Investigation (FBI) has reportedly had an active criminal investigation on him since 2014 regarding business dealings while he was lobbying for Ukraine. He is also a person of interest in the FBI counterintelligence probe looking into the Russian government’s interference in the 2016 presidential election.