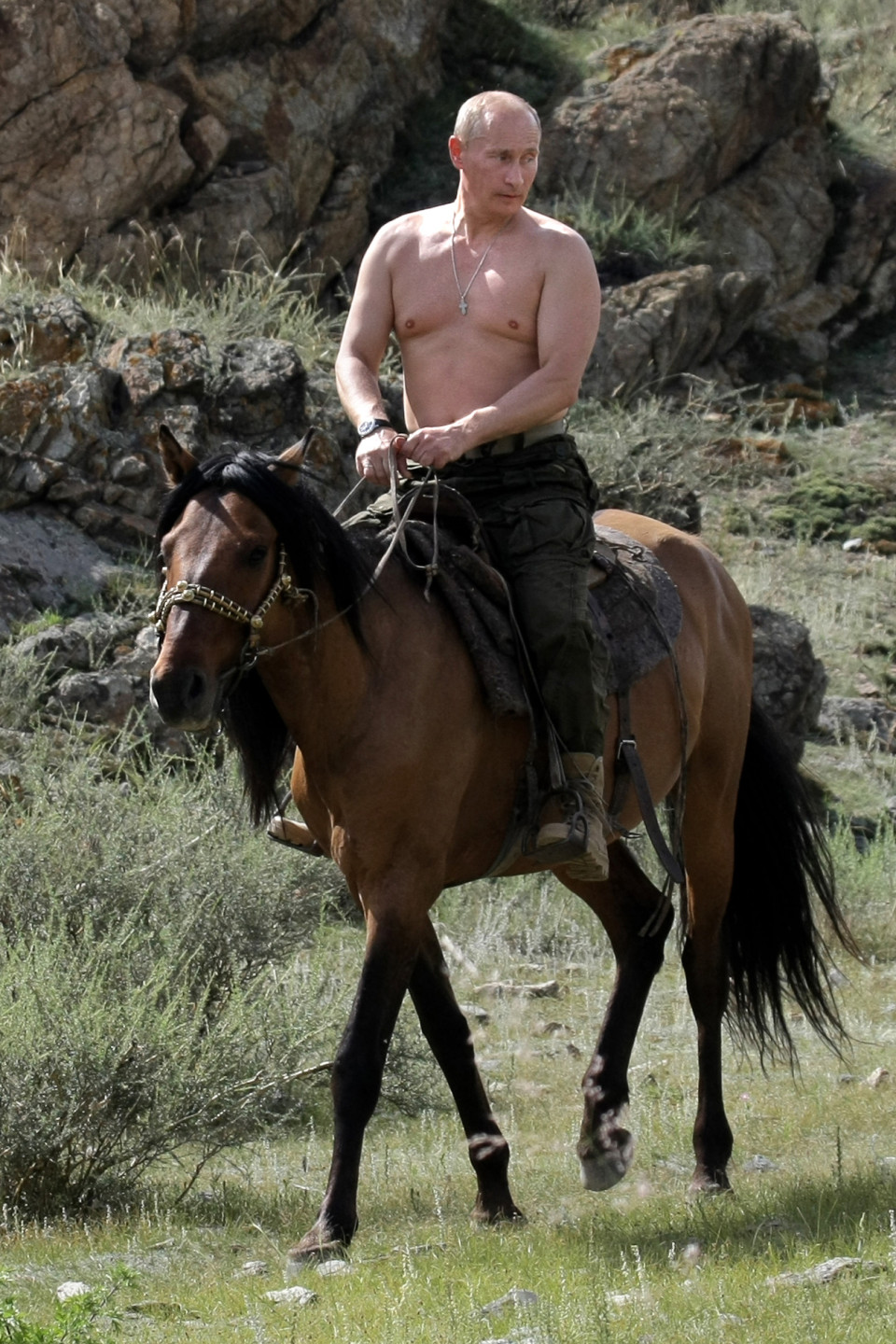 U.S. President Donald Trump is intrigued by Putin’s prowess, and a look at the cross-ties between the two leaders shows why. The two men share a zodiacal degree that is exact to the very minute, making the cross-tie a highly rare specimen in the field of synastry. Putin’s natal Saturn and Trump’s natal Jupiter are both located at precisely 17 degrees Libra and 27 minutes. Normally, a planet in one chart applies to influence the other person’s planet that is separating and responding. In this case, there is a mutual interaction with neither having the upper hand by application. The Libran interrelationship reveals Trump’s Jupiter manifesting with untempered enthusiasm, and showing much inexperience in contrast with Putin’s sober and fortified Saturn.

This extraordinary cross-tie’s Sabian Symbol is, Two men placed under arrest. In Trump’s chart, the conjunction falls in the 2nd house of personal finances and material assets, and in Putin’s chart, the paired planets are located in the 12th house of clandestine operations. This may very well suggest secret interactions and negotiations between the two men relating to money and other possessions and advantages.

From The Sabian Symbols in Astrology by Marc Edmund Jones, p. 167:

LIBRA 18 Two men placed under arrest This is a symbol of the maximum demand that may be made of any individual for self-consistency, and of the absoluteness of compulsions on human nature to provide a balance between inner and outer capacities. Implicit in the reversed symbolism is the importance of the self’s responsibility to its own essential characteristics, not as a limitation arising from the role it plays in life but as the necessity that the potentials of value in any given situation be brought to some point of immediate and effective function. The keyword is CONSEQUENCE. “When positive, the degree is a heightened challenge to every special talent, 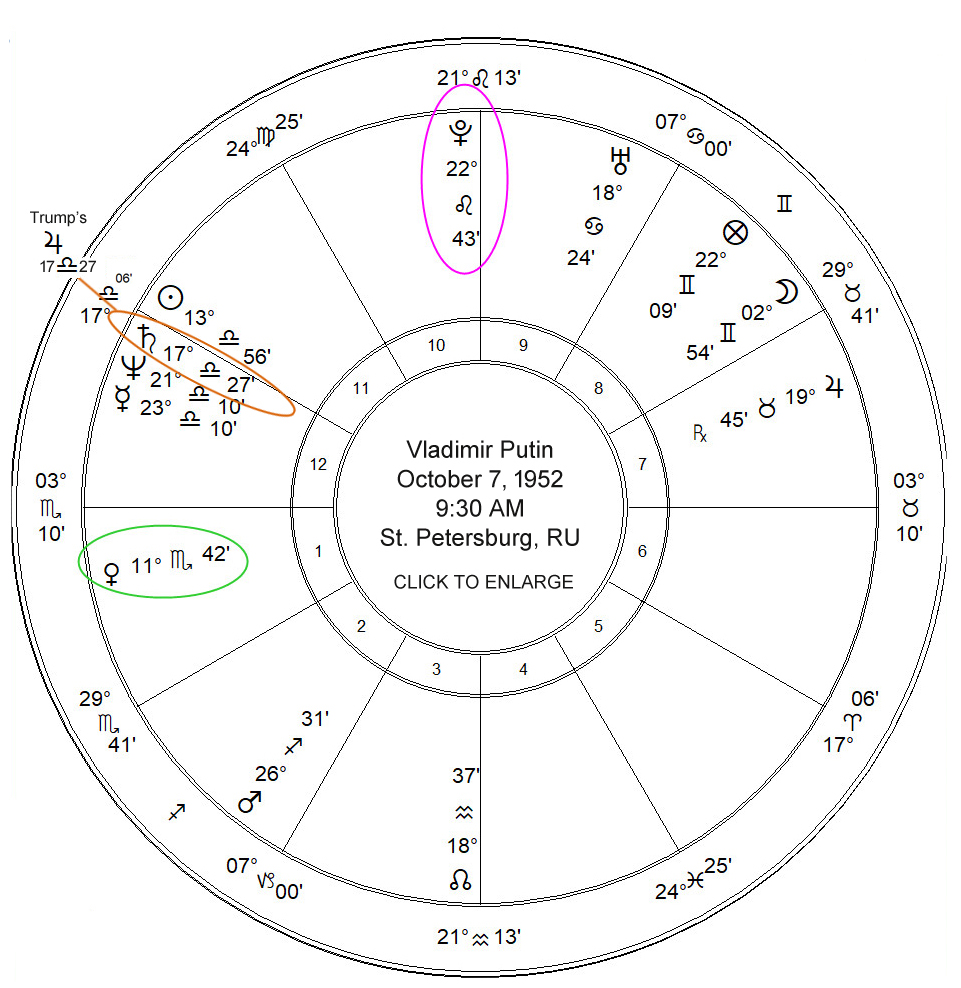 and when negative, total inappropriateness of impulse and act.”

The two men have most likely been in a competitive “embrace” for some time. They undoubtedly have shared resources of sorts, even if through third parties. The present challenge seems to be what they can accomplish together for their own advantage, that was not possible before Trump was elected.

The original symbol shines additional light on the mutual bond: Two men are placed under arrest and are taken away to give an accounting of their acts before a tribunal of society. Nations worldwide play the role of the tribunal, with the hope that the two leaders maintain a service to society, rather than enforce their powers for their own personal objectives and advantages. The negative expression of the degree, however, spells out in quite clear language that the potentials for self-aggrandizement are very real. News reports, speaking of Putin’s history of undermining the will of his people, include alleged murders of political opponents and other enemies. And Trump continually expresses inappropriate comments in outrageous and degrading ways toward American citizens of varying ethnicities, Democrats and members of his own political party and leaders of both friendly and unfriendly countries. Both men are under the arresting eyes of those who are awaiting the outcome of this strange camaraderie between the leaders in control of the world’s greatest nuclear arsenals. If there is a reason to believe that wrongs have been committed, that put the security of the United States at risk, the Special Council investigation, headed by Robert Mueller, will hopefully bring the perpetrators to justice.

The first official meeting between the two Presidents occurred on July 16, 2018, at the Helsinki Summit in Finland. It was a private meeting, and to this day the conversation and possible agreements made remain a mystery to all save the two men and their interpreters. There had been impromptu, brief encounters previously, usually on the sidelines of other conferences. However, the meeting on July 16th was a planned, formal tête-à-tête, that took place amid an air of trepidation from a large segment of the U.S. population, because of Russia’s interference in the 2016 U.S. presidential election, and Trump’s unsettling fascination with the Russian autocrat.

Exceptional events must have a matching counterpart in the astrological dynamics at the time they occur, and the celestial participation on the day of the Summit does not disappoint. The unique natal cross-tie already examined, has a surprising lineup of progressions that bring their combined potentials to life in an extraordinary way. Both Presidents had progressed planets synchronizing an arrival at their allied natal point on the date of the Helsinki Summit. On July 16, 2018, Putin’s progressed Moon came to 27 Libra 35 at the same time as Trump’s progressed Venus was lingering at 17 Libra 33.

Trump’s progressed Venus had been approaching his natal Jupiter and Putin’s Saturn since mid-2017. The Venus progression is of longer duration than Putin’s progressing Moon that has a 2-month activation, keeping his possibilities down to a limited window of opportunity. Putin’s progressed Moon symbolizes his emotional engagement in the aligned event, and Trump’s Venus contributed an intimacy to the fated encounter. Economics, whether personal or universal, could very well have been a topic of conversation at the meeting. These timely symbolic progressions, accompanying the natal bond, are a striking testimony to the grand scheme of things and correspond perfectly with the event that brought the two men finally face to face.

Trump’s Progressed Moon in his 12th simultaneously makes friendly Sextiles to his Jupiter and Putin’s Saturn. This shows his emotional investment buttressing and intensifying the interaction at the meeting, and points to a deep psychological bond with his comrade-in-intent. The planets forming these progressions take an optimistic slant on the most part, especially while the supportive aspects are in place. However, in the winter of 2018-19, Putin’s progressed Moon will square Trump’s natal Saturn, and by 2020 his progressed Sun will conjunct Trump’s natal Moon, and soon after make an opposition to his natal Sun. These are harbingers, announcing reciprocal contacts ahead. The outlook leans toward a more polarized involvement; manifesting conflicting objectives, as well as bringing to fruition the hopes each have in the other. The caveat being, will the results benefit the average citizen in both the United States and Russia, or merely be another display of the two men placed under arresting circumstances?