March 20, 2003, is the date of the invasion of Iraq by the United States and European military forces. At precisely 5:33 pm, the first bomb explosions were heard in Baghdad, Iraq. US government officials assured the American public that the initiative of the Shock 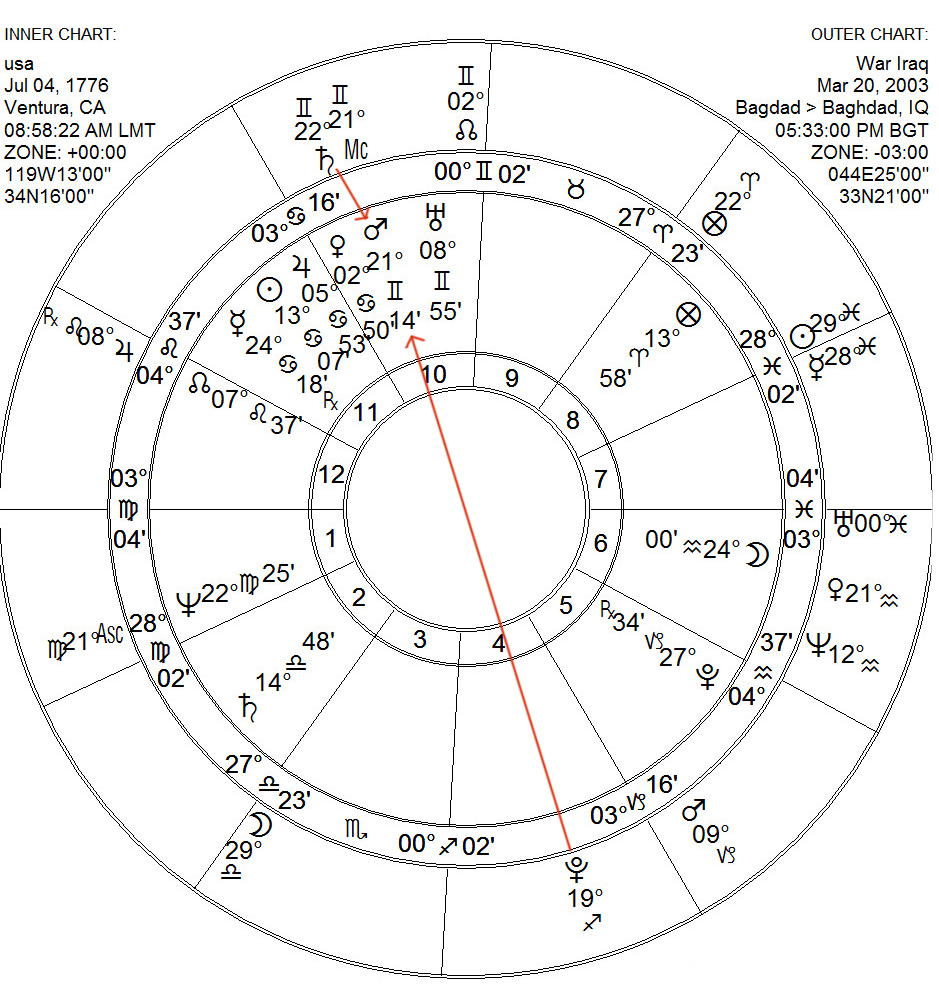 and Awe military maneuver would be of short duration. Viewing the bi-wheel of the US and invasion charts shows Transit Pluto coming to an Opposition to the US Natal Mars. This aspect alone reveals that the event would be a long and arduous one, contrary to the announcement that it would be a quick and passing event, which was followed by the “Mission Accomplished” speech on May 1, 2003. Transits involving Pluto are always of very long duration, because Pluto is the slowest moving of all the planets, and for that reason, the issues occurring at the time of its influence become life-changing for personal, national, and/or international entities.

The Transit of Pluto Opposite the US Natal Mars took place over a span of two and a half years to complete its mission. But an interesting feature of this long transit is that on March 23 of 2003, Pluto was Stationing for the first time within a degree of the US natal Mars at 19 Sagittarius 57 – only 15 minutes over the allowable orb for a Transit. But even more compelling is that Natal Pluto was Stationing Opposite George W. Bush’s Natal Uranus and North Node – these both being Conjunct the US Natal Mars.

Transit Saturn is also involved in the configuration by its presence in Conjunction with US Natal Mars and Bush’s Natal Uranus. It is a double hit on the initiative of the US, with pressures from those in authority as shown by its placement in the 10th house, i.e., George W. who initiated (Mars) the war in his unconventional 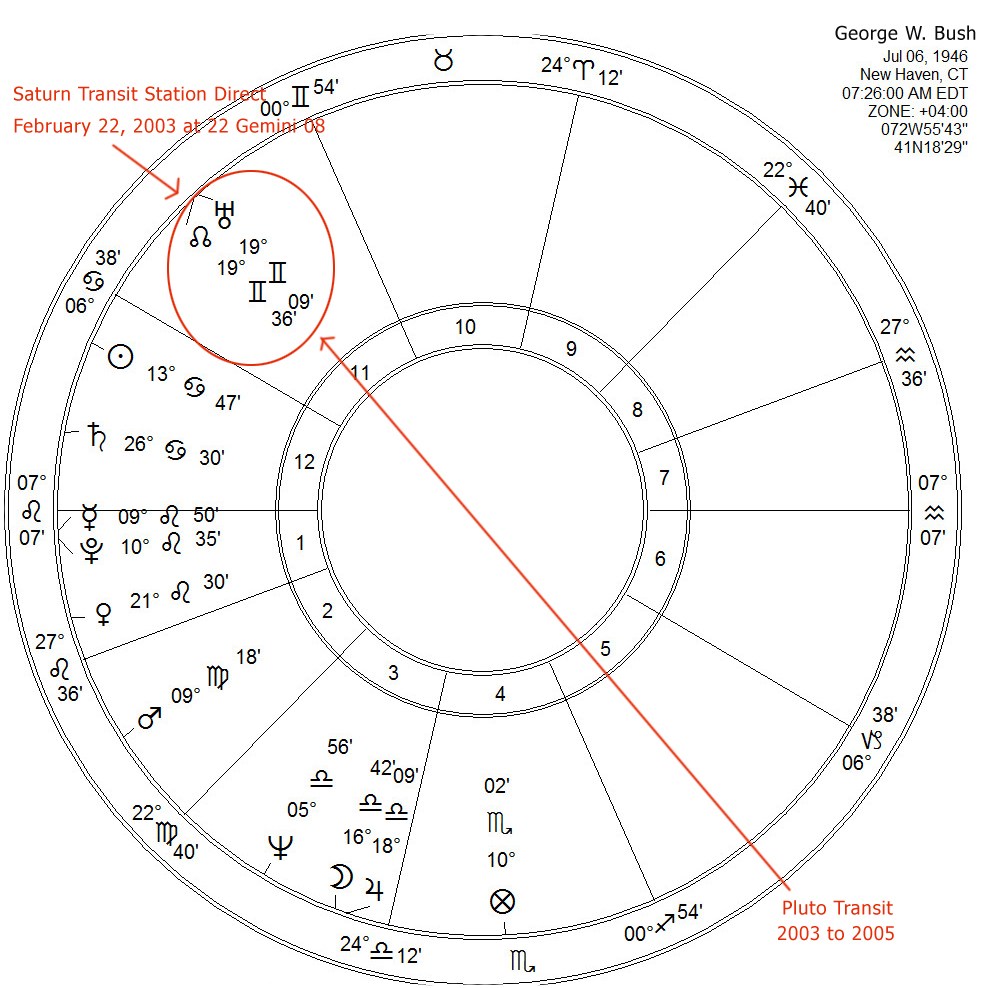 way, true to the manner of Uranus which Transit Pluto was opposing in his Natal chart at that time. Uranus and North Node are circled in red in Bush’s chart.

It takes 248 years for Pluto to travel thru the signs and houses at approximately 11 to 30 years per sign, depending on retrograde motions and elliptical orbit. Because of Pluto’s very long Transits it is sometimes not taken into consideration that there is a period of influence that exceeds the generally accepted orbs. Issues in a personal life or that of a nation develop slowly, sometimes building imperceptibly over decades. The beginnings of Gulf War II in the minds of its creators began far in advance of exact aspects. But it is the exact aspects involving Stationary contacts that reveal the actual outward appearances of a slowly progressing inner resolve.

Conspiracy theories have been cropping up since the Twin Towers were demolished in 2001. Pluto is often involved in any situation where the truth is not easily revealed, although the keyword for Pluto in Mundane (political) astrology is Probity. The connections are clear, both in real life and astrologically, that presidents influence the general state of affairs of the group they are the surrogates for, whether for good or evil. Probity is a rare attribute and it is never certain as to its genuineness when viewing it from the outside. One must know oneself ultimately from within; Probity is in the mind of the beholder after all, and as a country goes, it is seen or not seen in historical context.

A look at Hillary Clinton’s potential relationship with the American people can be seen in her Natal planet contacts with the US planetary positions. The bi-wheel shows Hillary’s Moon in the outer wheel exactly Opposite the US Natal Neptune. This aspect is ideal for perceiving the needs of the American public and feeling obligated to do something about them. Mutable sign oppositions show an interest in the people and their welfare, above the immediate Cardinal need to fulfill oneself, or to follow ideals and principles from an emphasis of the Fixed signs. 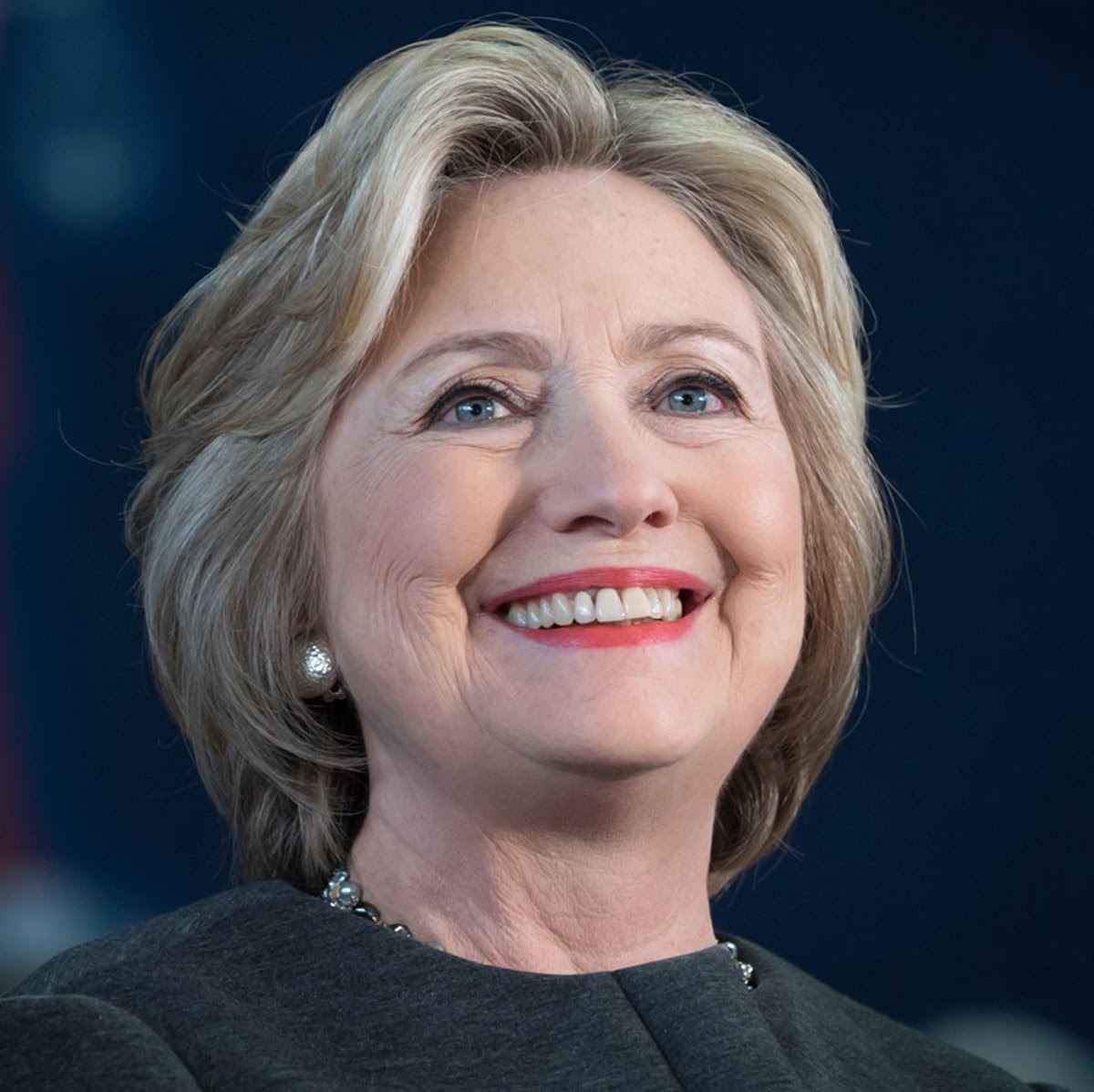 Hillary’s Moon in Pisces is sympathetic and compassionate toward all people everywhere. Oppositions engage others and magnetically pulls them together or polarizes them. Neptune is one of the planets of Significance, and with Hillary’s personable Moon in direct communication with the masses (Neptune), she is able to show that she is willing to hold up her end of the responsibilities of governing. Her slogan for the 2016 campaign is “stronger together,” and that sums up what this connection between charts can mean if she becomes the 45th US president. Her track record of putting children and women’s issues in the forefront of her mission through her early years is confirmation of her commitment toward others, and it is a testimony to the honest sacrifice she promises when possibly taking the reins to yet more service to her country.

There is a great deal revealed about her and her contribution in this aspect. Neptune is the planet of obligation and authority to fulfill a broadened and comprehensive vision, especially in the field of health and jobs. A Moon in Pisces is synonymous with compassion and self-sacrifice. The Sabian Symbol is Spiritist Phenomena. This degree and Moon position in Pisces polarizes her with the American people in both positive and negative w 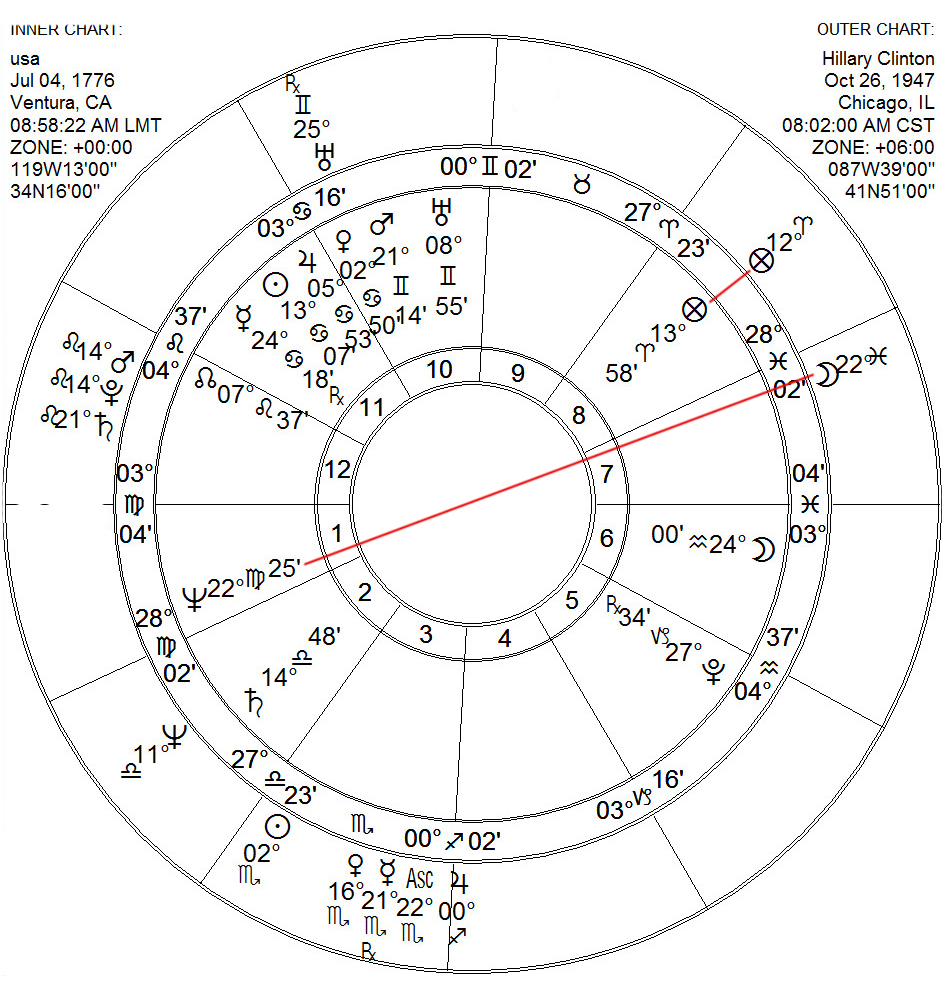 ays. There may always be a cloud surrounding her past. But her overall contribution, on the other hand, holds much to be proud of, giving hope that the future brings more of the same.

The Part of Fortune in the two charts are within 1 degree of Conjunction. While Hillary is in service of the US government she will be assured of continuing material success, because this particular Part reveals the place of greatest potentials for the manifestation of personal vision. Hillary Clinton has benefited by being in public office, as well as benefiting all who come in contact with her sympathies.

Donald Trump has numerous planetary contacts with the US chart. His Sun position is Conjunct the US Mars, and his Natal Moon is exactly opposite. This configuration is very exciting and stimulating for both the US population and Trump. Early in his career, Trump was inspired to take on Manhattan. His real estate endeavors pulled NYC out of a slump, and NYC gave him a place to start building his empire. Trump received accolades from NYC officials for his efforts to turn NYC around.

The Sabian Symbol of the US Mars is a Labor Demonstration. And the symbol for Donald’s Moon is A Chinese Laundry. Here are indications of a general interest in business as opposed to Trump’s current interest in politics.

The US activities under t 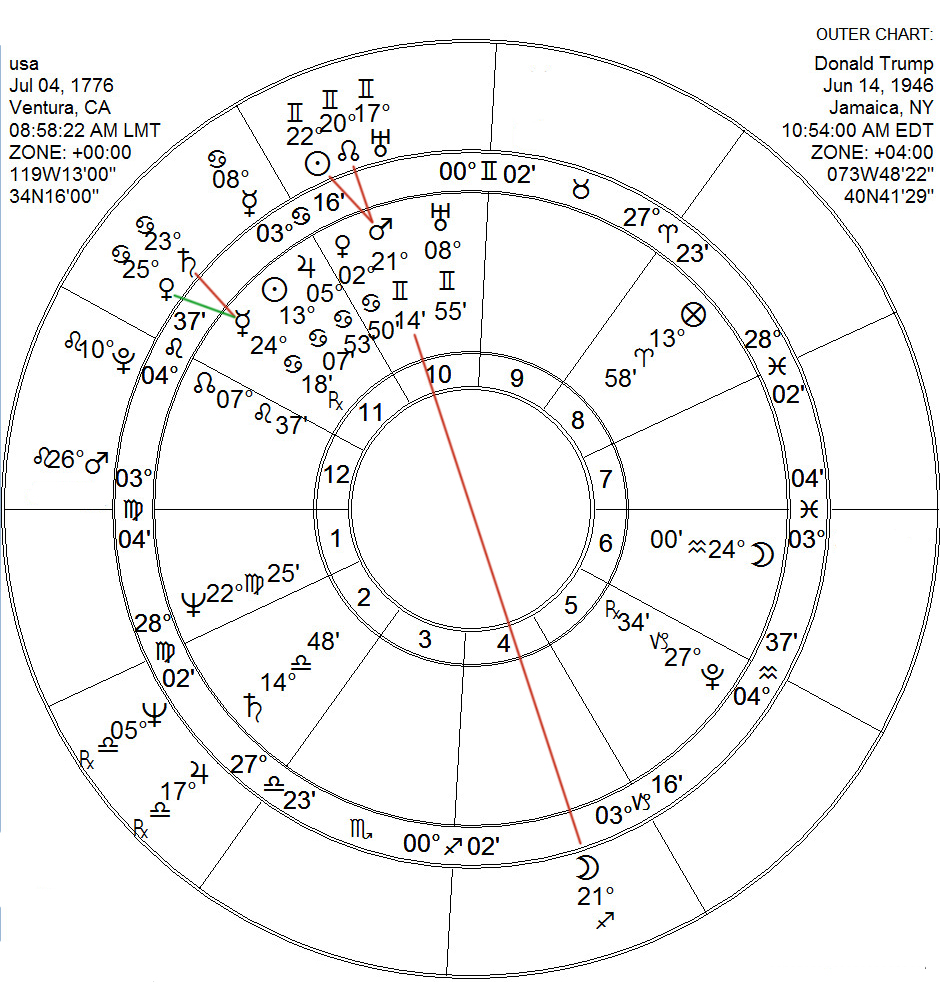 he Mars influence stimulate Trump personally to fulfill some of his ambitious purpose (Sun) and to have a general touch with the US public. The aspect is strengthened emotionally through the US Mars Opposition to Trump’s Natal Moon. In general, the planets of Vitality in Trump’s chart give him a place to put his energies; that is in the economic heart of the country. Branding his name on any project that will tolerate it is part of his marking his territory and fulfilling his ego through the Sun and Moon; the Sun representing his ego and the Moon representing his need for public recognition.

Trump’s Natal Saturn and Venus straddle the US Mercury making him ultra-sensitive (Saturn) to the basic mindset of the American public’s attitude and perspective. He pours his money (Venus) into projects where he can gain the most for his investments both financially and in terms of personal status and gratification. The US Mercury Sabian Symbol is A dark shadow or mantle thrown suddenly over the right shoulder. It is a degree of destiny and power.

What these three presidential figures in this post have in common, with Bill Clinton included, is the Sharp Destiny shown by a Jupiter/Saturn in Square aspect. This is an aspect putting pressure on the individual to act in accordance with good conscience. All four have been scrutinized to an astounding degree, and especially Bill Clinton. Herein lies the difficulty of being born with this type of aspect and destiny. This is a good indication that if there is wrong-doing in the life of the native, it will surely be brought to the public’s attention. 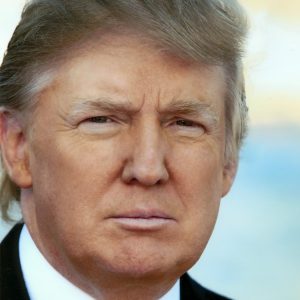 If one wants to locate the source of Trump’s refusal to follow advice to be more mature and presidential it is in the placement of his Natal and High Focus Leading Uranus. A High Focus Uranus usually acts independently of rational behavior, even to its own detriment. It’s uncontrollable and at times extremely disturbing. It can repulse rather than attract, and with each new radical and spontaneous comment, it is bringing him ever farther and farther from his objective to be popular in the public’s eye. A Natal Uranus in Opposition to Natal Moon polarizes others in a shocking manner, with verbal (Gemini) insults thrown into the arena in constant disregard for the feelings of others (Moon).

In light of the recent video of Oct. 10, it is hard to tell yet whether this storm will actually have an ultimately negative effect on the Trump campaign. The fact that there are no really strong Transit and Progressed indications of outer planets making hard aspects with his Natal planet locations shields him from the devastating effects it would have if the chart was truly “hot” at this time.

Trump’s Progressed Sun is just coming out of the 12th house of experience behind the scenes to move toward a more overt presence in the lives of others. It is also leaving the sign of Leo where the native has had the license to indulge in self-expression without restraint. Now that the Progressed Sun is doing an ingress into Virgo, there will be a necessity to make serious adjustments in character in order to more successfully associate with the members of his chosen milieu.