Baez’s Uranus in close contact with Dylan’s Moon ties them together, but still in a detached manner. Dylan received emotional support from Baez, through her obviously liberated spirit as a feminist. Uranus brought spontaneity and unpredictability to their interactions, w 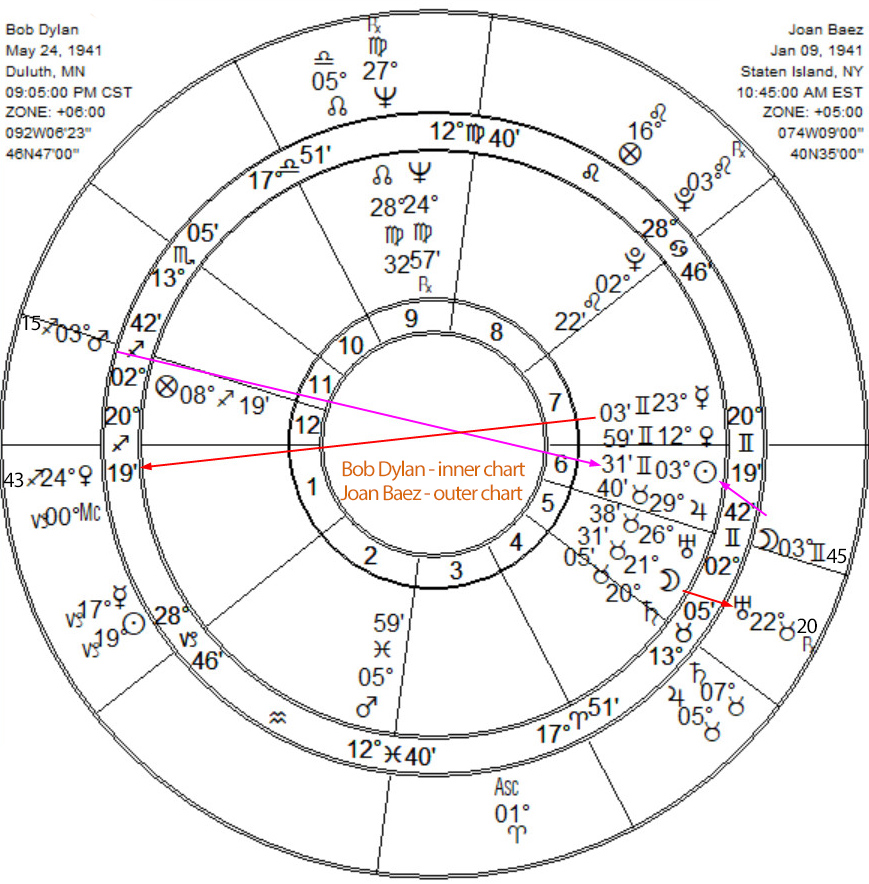 hich was the substance that nurtured the emotional side of Dylan. They both had to maintain their composure throughout the push and pull of on again off again emotional swings, that the contradictory natures of the Moon and Uranus represent with one so involved, and the other detached. Trading these tendencies, first one, then the other. Dylan has no oppositions in his horoscope, leaving him with a reputation of one who is extremely private and hard to approach. However, with so many cross-tied planets between them, either through conjunction or opposition, Dylan was able to experience the engagement that normally comes with oppositions in a natal chart, but that he so unfortunately lacks.

One Sabian Symbol to take note of in the natal chart of Bob Dylan is Venus, the planet-indicator of the arts, at 13 Gemini, A great musician at his piano. Although Bob started out strumming a guitar, he is proficient on the piano, which is how he facilitates his songs in the 21st century. Obviously Dylan has accomplished all that the keyword and positive interpretation that the Symbol describes.

GEMINI 13 A great musician at his piano This is a symbol of individual artistry as the property of all, with its expression both its strength and the means whereby others are encouraged to like accomplishment. Here is experience at a climax on the side of self-refinement in skills and talent, and at a peak in its gratification and its promise of continuing effort and sharing of rewards. A continually expanded dimension of being becomes the constant revelation of man’s true estate. The keyword is ACHIEVEMENT. When positive, the degree is the creative assurance that contributes enduring overtones to human understanding, and when negative, self-defeat through a delight in momentary attention or superficial adulation.

Joan Baez has an equally revealing Sabian Symbol. Her Sun degree is Capricorn 20, A hidden choir singing. Her voice is her gift, and the positive description in this one of the many Symbols in her chart betrays any desire on her part to keep her talent, goodwill and benefit to herself alone. At a young age, Baez was concerned for the good of all mankind. her natal opposition in mutable signs gives her a Natural Disposition that puts the welfare of others above her own needs. It is the mark of a humanitarian.

CAPRICORN 20 A hidden choir singing This is a symbol of the eternal music of the spheres, and is an emphasis on the ideality of experience as at root a symphony of cosmic reconciliations. The differences of individual character which have contributed to a person’s initiative and a conscious selfhood are here brought to their point of ultimate and single source in an overall existence, and each and every element of inharmony is reordered as a participating distinctiveness of the whole. All men are at one in the universal pattern. The keyword is WORSHIP. When positive, the degree is a unique gift for establishing a common interest and making it a power for the good of all, and when negative, personal aloofness and lukewarm loyalties. 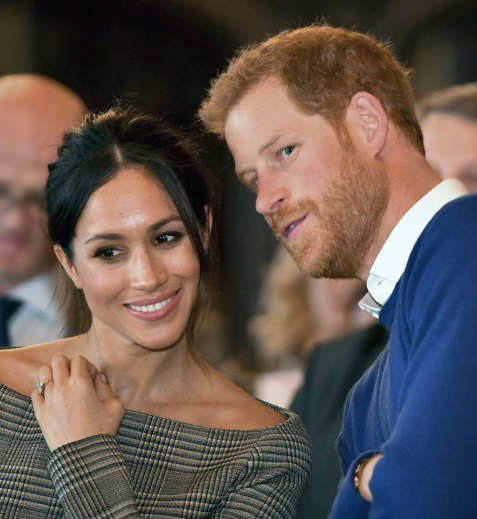 There are techniques that can help couples make certain that their choice in partnership will bring about a fruitful outcome. The beginnings of attractions often bring with them a euphoria that often blinds the hopefuls into a belief that their match was indeed made in heaven, only later to find out that the realities are far different than what was expected. Astrology can reveal harsh realities, and because of this, the astrologer should step lightly when it comes to telling the truth of what she or he sees in the chart comparison data. This is the case with Prince Harry of England and LA born Meghan Markle.

The reason to be ultra-cautious in a reading of the cross-ties and element comparisons between these two celebrated individuals is because a comparison of their charts reveals great challenges. There is a lack of astrological factors promising to keep them closely tied.

Here are the techniques to apply when seeking an understanding of the potentials between any prospective partnership, whether personal or for business purposes.

Using a 1 degree orb, look for planets in one chart that are in the same degree or opposite any planet in the chart of the other. If there are planets in the same sign and degree or opposite, it is safe to say that the connection between the couple is potentially positive for a continuing and fruitful relationship with little struggle toward that end. An analysis of the house positions and characteristics of the planets involved is taken into account in the interpretation.

If there is no cross-tie between the charts, the two individuals will need to make a very concerted effort to establish and maintain the deep inner connectivity that promotes a life time of fulfillment. With a lack of Conjunctions and/or Oppositions between the charts, the parties concerned will be caught up in a daily struggle to reestablish the commitment to the relationship, coupled with a marked necessity to adjust to the other’s personal differences. On the other hand, charts with shared cross-tie energies are in a natural state to harmoniously enhance the potentials between them.

The planets of Efficiency; Mars, Venus and Mercury in one chart are compared with the other’s same planet in terms of the element compatibility of the signs where they reside. If for example Mars in one chart is in an earth sign, to be compatible with the other chart, the Mars must be in an earth sign as well or in a water sign. Earth and water signs are compatible with each other, and the fire and air combination are harmonious with each other as the other possibility. This is an examination of Mars to Mars, Venus to Venus and Mercury to Mercury between the two charts.

Comparing the Temperament Type, High and Point Focus Planets, Natural Dispositions, Sharp and Loose Destinies and other Focal Determinators between the two charts can reveal hopeful possibilities when the primary techniques explained above lack interactive cross-ties and similar elements.

CHART COMPARISON BETWEEN HARRY AND MEGHAN 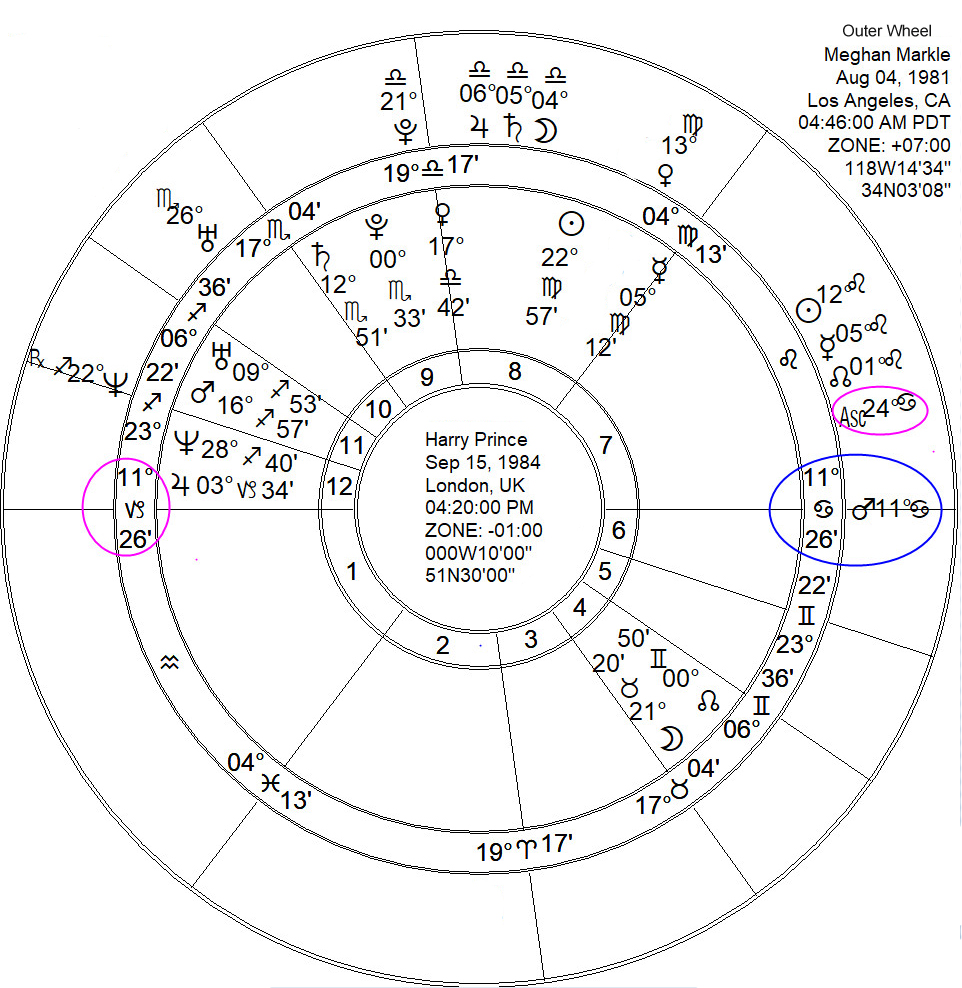 The chart cross-ties between the prince and the showgirl are virtually nonexistent. Their only harmonious  elements compared are between their Ascendants in earth and water signs. This means they can give attention to their shared perspectives on life, and depend on the skills they have in common to focus their lives toward a meaningful purpose. Each has a history of humanitarian interest, and they bring this to the relationship to combine their mutual dedication to public service. Their partnership as seen by the public can be an example of unselfish giving, and may be the foundation established to carry them successfully into the future. This is afforded to them via compatible Ascendants.

A look at the Progressed horoscope of each individual will also shed light on the connections that are and will be promised. Comparing the Progressed planets to positions in the partner’s natal chart can give vital promise to a continuing interrelationship. All of the Major Aspects can be brought into play for this underlying view into the marriage potentials. The event chart of the day of marriage, with its configurations in combination with each native’s chart, is also of import.