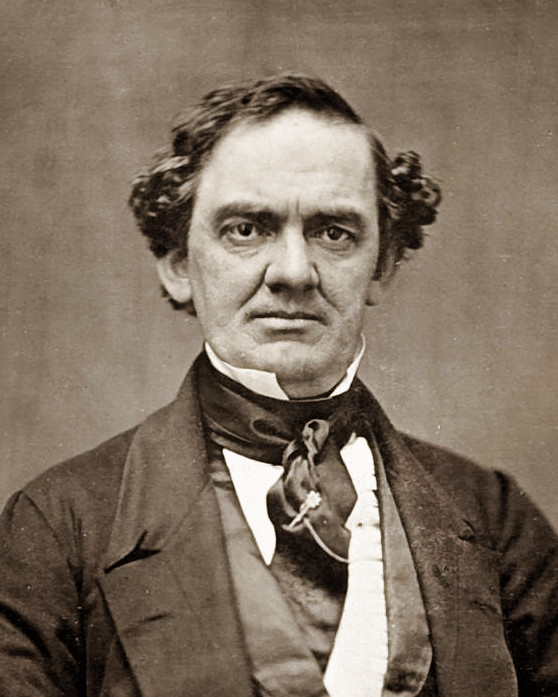 Throughout P. T. Barnum’s formative years, Pluto had not yet been discovered. A look at Barnum’s chart after its discovery in 1930 reveals that Pluto had been in the prominent position of High Focus as the handle of a Bucket Temperament from birth. From the beginning, Pluto was the covert force behind the gathering of human oddities and animal acts brought to the imagination of world audiences. Pluto’s characteristics include a compulsion to make an impact on present and future generations. It is fitting that the start of Barnum’s enterprise was represented by the collection of societies outcasts that lead toward what would ultimately be known as the greatest show on earth.

And it is noteworthy to mention that Barnum made no bones about declaring his intent to make a profit from the attractions that he gathered in the beginnings of his career as Ring Master par excellence and creator of the P. T. Barnum Circus, initially Barnum’s Grand Scientific and Musical Theater.

Actor, Hugh Jackman plays the role of Barnum in the spectacularly competence 2017 film, The Greatest Showman. The plot follows the general guidelines of real life events, and the movie simulates, on the limited screen, the awesomeness of the grand and lavish performances that were even far more compelling in real life. What started as a bazaar conglomerate of exhibitionists, eventually evolved into the traveling three-ring circus for which the showman was ultimately known. Although there are those who criticize Barnum’s audaciousness in exploiting the handicapped and disfigured, he did give them work and credibility at a time where society was extremely harsh to those unfortunate types. This again is defined by a High Focus Pluto. 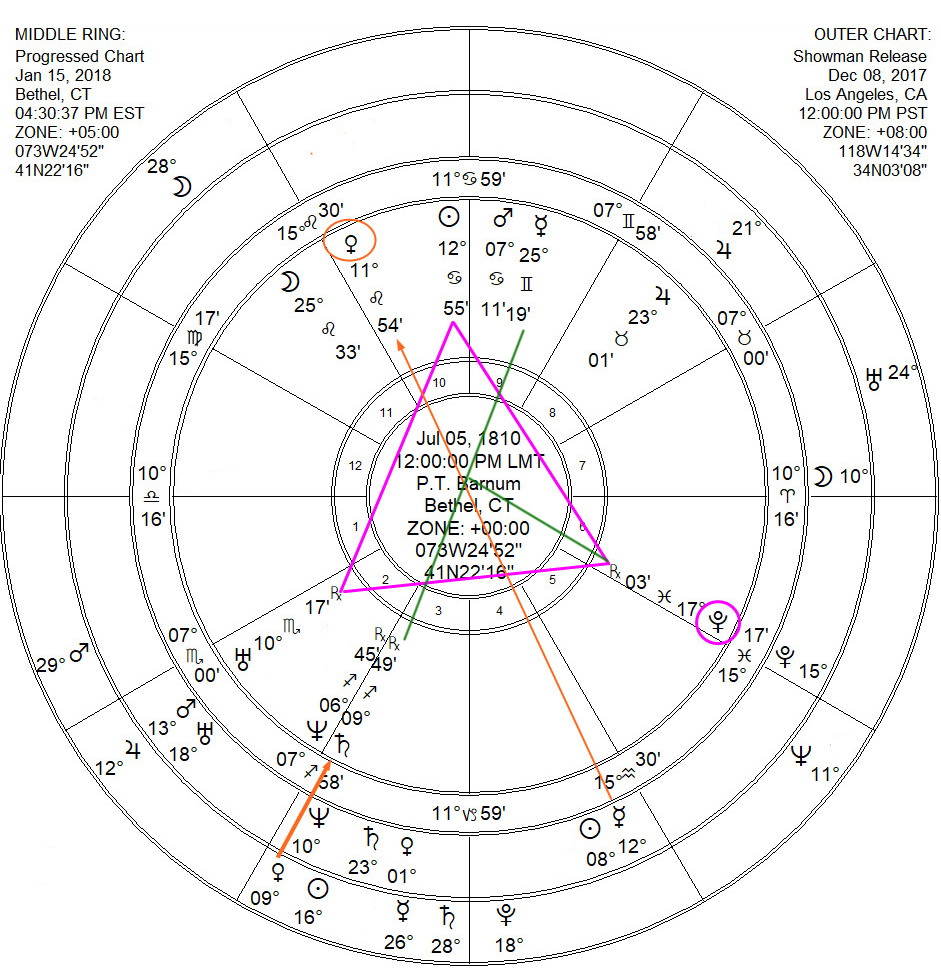 The movie debut on December 8, 2017 pays tribute to a special time in history, and validates a good look into the chart of the man that is known for more than show, but is the icon of the creative American spirit of entertainment and success. This success is represented in the chart by a Grand Trine, shown in pink, that includes the High Focus Pluto in Pisces, and that gathers up the energies of the highly unusual, represented by Uranus in Scorpio, and that completes the momentum with the power of the Sun in Cancer, the sign of Expansion. There is a T-Cross, shown in green, coupled with the Grand Trine that puts Pluto in Point Focus as well as High Focus. This super-powers the meaning of the planet that testifies to the long-lasting impression the man and his ideas has in the field of entertainment. 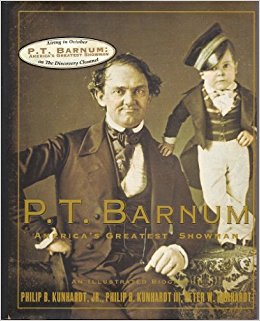 the chart was the Bowl Temperament Type that was more suited to the person who had to think things through, time and again, before taking action. But with the discovery of Pluto, the chart becomes the revelation of the Bucket Temperament and elevates the dynamic to a  more direct display of compulsively driven ambition, with a touch of compassion, because of the influence of Pluto’s placement in the sign of Pisces. With or without Pluto, the chart’s Natural Disposition is Mutable. So in spite of the accusations of abuse and misuse of others, because of a dependency on their talents for his success, Barnum was at heart a humanitarian, interested in other people’s welfare and well-being.

The chart’s dynamics include the Progression of Mercury, shown with the long orange arrow Opposite Natal Venus throughout the filming of the modern movie. We often see historical figures having aspects in the present, when there are developing activities associated with their lives. The original Sabian Symbol for Venus is, Japanese lanterns, music from a string ensemble, and an animated interweaving of colorful figures mark a garden party. Here is where we begin to see that the “variety show” potentials were well defined in the natal chart itself, and are brought into focus with modern documentation with the release of the celebrated movie.

But the Sabian Symbols play an even more fascinating part in mirroring the characteristics of this particular life, with the symbol of the all-important High and Point Focus Pluto in the degree of, A gigantic tent. The circus tent concept was an afterthought, brought into being because of several devastation fires causing an economic crisis in the show’s production. Its astounding literal confirmation in the chart testifies once again to the magic of the Sabian Symbols and the 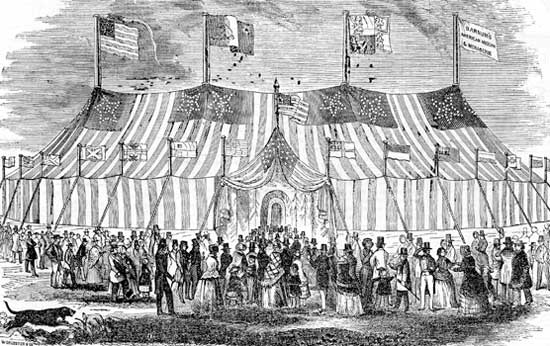 ir importance in a thorough study of astrology.

PISCES 18 A gigantic tent This is a symbol of the completeness with which man is able to see his experience both steadily and whole, dramatized here by the circus as representing an utterly naïve intensification of self-consciousness. The totality of life is brought to some single center in every moment of true excitement or total sharing of skills and risks, and each individual at such times has a renewed insight into his capacity for putting his world in order for his ultimate on-going as well as for his immediate entertainment. The keyword is APPORTIONMENT. When positive, the degree is a genius for organizing divergent capabilities in a common cause, and when negative, delusions of grandeur and unamusing bombast.

It is unlikely that the exact time of birth would be known in 1890, and so the houses and positions of the Moon in the Natal and Progressed charts are not taken into account.

There is a Transit by Venus however, shown at the bottom of the chart with a short orange arrow, that does stand out as significant, by its Conjunction with Natal Saturn at the time of the release of The Greatest Showman into public movie houses in late 2017. The Sabian Symbol is, A golden haired goddess of opportunity, and it speaks for itself. Fast moving planets in Transits are relatively short-lived, but in this case Transit Venus does support the potentials of the natural good fortune available to the native through Saturn’s sensitivity to all possibilities at hand.

Venus is circled in orange to draw attention to the coming Lunar Eclipse on 12 Leo, that may likely bring an Academy Award in early 2018 for the skillfully developed and highly entertaining production.