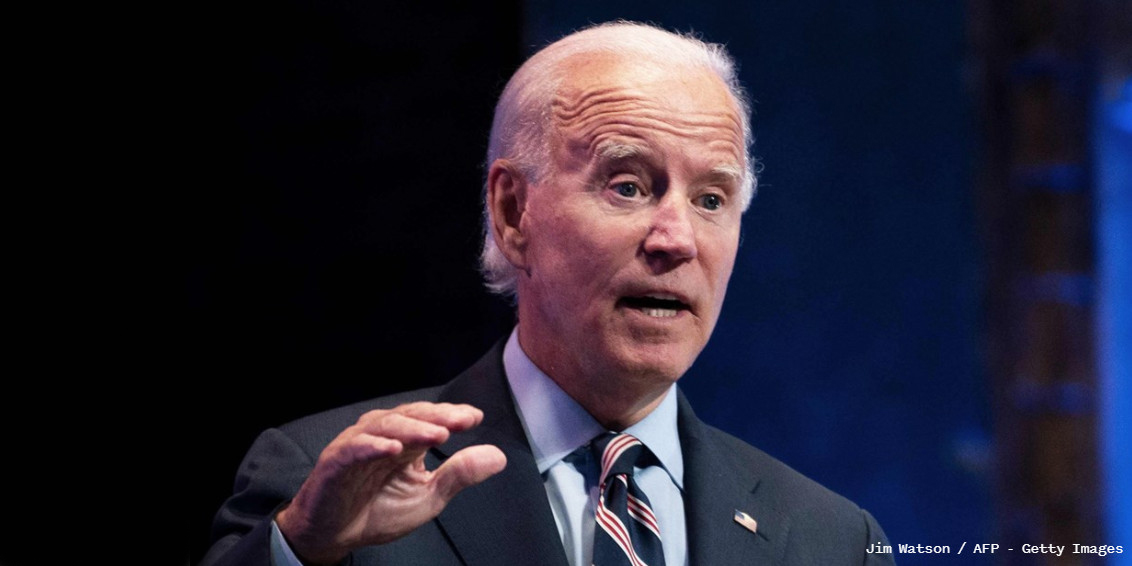 Difficulties arise when attempting to predict the outcome of an election between several candidates because both or all individuals will be displaying multiple planetary aspects at the time of the intense competition. One might think that aspects with the benefic Jupiter, in contrast with Saturn, the more challenging planet, would indicate a favorable outcome, however, Jupiter has often been seen prominent in stressful and even over-indulgent situations. Saturn, on the other hand, can point to more responsibility thrust upon an individual for good and is not always referring to disappointing and limiting conditions. Also to take under consideration are the conjunctions of outer planets with natals, and the square and opposition hard aspects all can be interpreted in a favorable or unfavorable fashion. 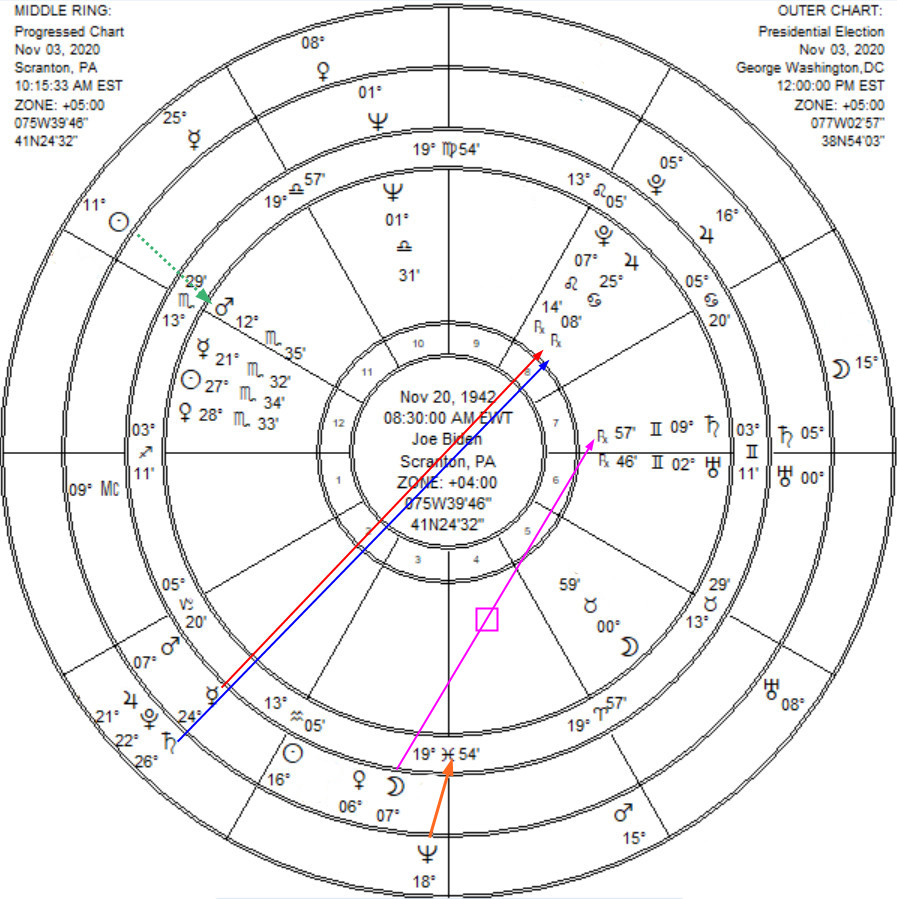 The square and opposition aspects are notorious for bringing about radical change and should not be feared only as harbingers of bad outcomes. Indeed there are examples of the unexpected good, that can be seen in the history of electing presidents. One notable case with a conjunction to the natal Sun is seen in the chart of Jimmy Carter who had transit Pluto visiting his natal Sun in Libra at the time he was catapulted into the limelight as the most powerful leader in the country. Pluto could just as easily have thrown him a crushing blow that would have negated any future desire to remain active in the political arena. With all the variables, astrologers are continually tempted to make predictions, even though it is tantamount to the art of guessing. With presidential elections, there’s a 50-50 chance of getting it right, and those odds are not bad. With all this being said, a look into the planetary activity in candidate Joe Biden’s horoscope, calculated for the general elections of November 3, 2020, is in order. The transits and progressions lean toward a favorable outcome.

One of the most interesting features of Biden’s horoscope is the Sabian Symbol for his Sun degree, The king of the fairies approaching his domain. The degree shows a person with leadership capabilities focused on his own realm of influence, the United States. Biden’s career has spanned approximately forty-seven years of holding the offices of United States Senator from Delaware, and following that, eight years as Vice President in the Obama administration. Biden is again on the campaign trail, and again with the hope of attaining the highest office possible to achieve in the country. He has often “approached” the highest office, running in 1988 and 2008, with this candidacy being his third attempt. There are multiple supportive planetary aspects in his dynamic chart that assist his present pilgrimage to the domain of the White House, along with a few configurations of more challenging nature, that could turn to his advantage as opposed to any of the disadvantages stated above.

From The Sabian Symbols in Astrology, by Dr. Marc Edmund Jones:

SCORPIO 28 The king of the fairies approaching his domain This is a symbol of the eternal promise underlying all inner self-realization since any actual fullness of life is altogether independent of the passing state of affairs in a world of time and space. Implicit in the symbolism is the futility of man’s common reliance on people and things through some mere accident of contact. Outer reality takes the form with which he endows it as he exercises his sovereignty over its various potentials in the creative realms of his own imagination. The keyword is ALLEGIANCE. When positive, the degree is a special competence of inward vision and a consequent outward perspective of high effectiveness, and when negative, capricious self-indulgence.

The king of the fairies symbol is one of a “handful” of Sabian degrees that exemplify spiritual characteristics. (a) They signal that the native affiliated with the symbol must surrender their own personal fulfillment for the expressed purpose of leading others in a release of theirs. Biden, as a life-long politician, has dedicated himself to those ends, and in that way continues to sacrifice his own needs, in order to be of service to the American people. With this special degree, in Biden’s 12th house of inner psychological potentials, his otherworldly and lofty intent may not ever be truly seen, understood, or appreciated by those with a diametrically opposed agenda. Working behind the scenes is how a 12th house Sun functions best, and with Venus as an ally in the same house, the work he plans with Kamala Harris promises to be significant although discrete.

THE TRANSITS AND PROGRESSIONS 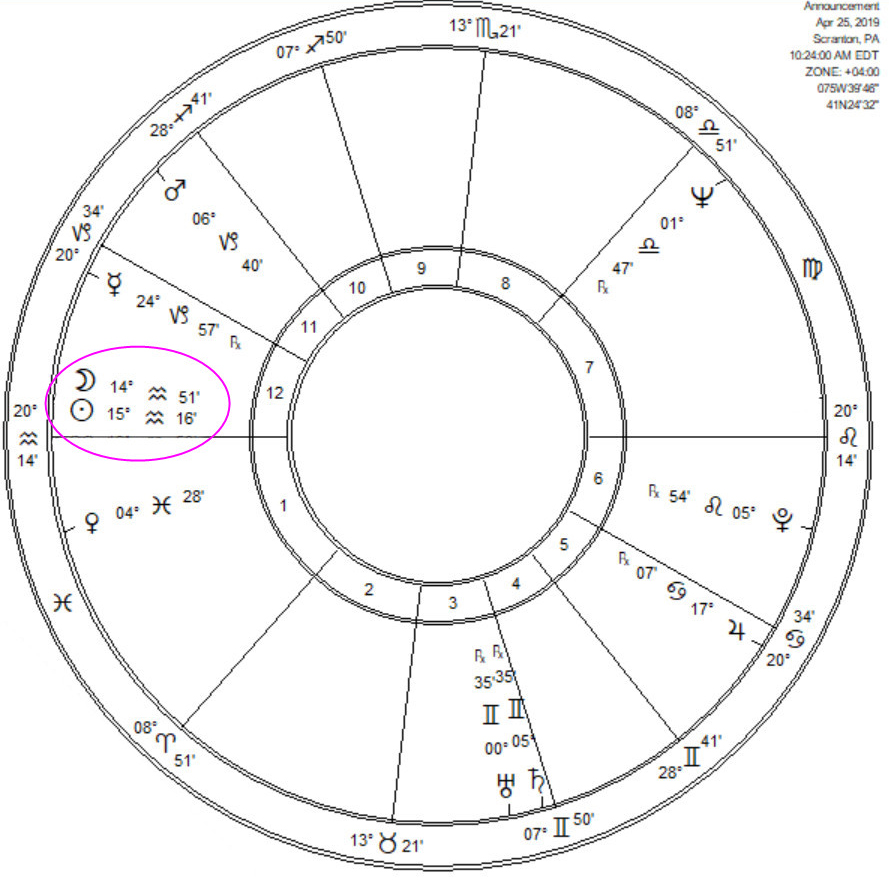 The ominous yet auspicious transiting Saturn-Pluto conjunction has been opposing the U. S. natal Mercury for most of 2020. The formidable pair are also in opposition to Biden’s natal Jupiter that is at the same time conjunct the U. S. natal Mercury. To add heightened power to this aggregation of planets is Biden’s progressed Mercury as well, at 24 Capricorn 56, now in its station-direct at the location of the  Saturn-Pluto transit. These combined planetary energies make this entire year and campaign period unusually outstanding for the candidate. This progressed Mercury will make its exact and climactic opposition to natal Jupiter in the latter part of 2021. The entire complex planetary scenario highlights the intense magnetism between candidate Joe Biden and the minds of American citizens represented by the U. S. Mercury in conjunction with the Biden Jupiter. The multiple transit and progressed oppositions, across the board, have the expressed purpose of working out differences in an extremely polarized political environment.

Biden’s progressed Mercury station is a sign of radical change, as Dr. Marc Edmund Jones explains in his Scope of Astrological Prediction. (1) “The phenomena in the secondary directions always identifies a subtle or psychological shift in the fundamental course of life, such as requires a critical regrasp of experience and often proves to be an adjustment over an appreciable span of time whether marked by some single sharp event of easy identification or by a complex syndrome of changes of less obvious interrelation.” The general elections on November 3, 2020, will be the opportunity for the Mercury station to manifest as described above.

If Biden should experience a “single sharp event” such as winning the White House, to which his Sun symbol refers, it will not only transform his own experience but as a surrogate leader, it will transform the lives of Americans, “his subjects,” as any progressed station for a president or king would portend.

Biden announced his run for the presidency during the heart of his progressed lunation on April 25, 2019, shown circled in pink in the single progressed chart. A progressed lunation marks a pivotal turning-point similar to a progressed planetary station, but in the case of a lunation, past experience gradually comes to a close, to usher in entirely new possibilities that the native may or may not foresee. It creates a period of time where the individual may feel they are in limbo and challenged by the undetermined path ahead. This astrological dynamic can span several years in its molting process. In Biden’s case, he has his sights set on a definite objective which clearly is achieving an ultimate position of power and authority; a “kingship” of sorts that the role of the presidency offers.

Together, the progressed lunation and station-direct Mercury, represent an underlying transformation in Biden’s daily life, that continues to take hold now and for the next few years. Phenomenally, along with the progressed Mercury station, shown circled in red in the ephemeris graph, is Biden’s progressed Saturn, circled in blue, also in station-direct, and in this case in conjunction with the U.S. High Focus Uranus. Circled in green on the graph is Uranus, which will be following the same path as the other two, again in station-direct in 2023.

There are currently, several supportive transit sextiles assisting Biden’s all-important King of the fairies Sun degree. They are Jupiter, Saturn, and Pluto, which are included in the main characters of the lineup of present configurations.

And looking forward to January 20, 2021, the day set aside for the inauguration of the next president, we can see the possibility of the swearing-in of Joe Biden, thanks to the transit of Pluto, the planet of probity, advancing to within 10 minutes of arc of his presently high-profile, progressed Mercury; still within its transition from retrograde to direct, in opposition to natal Jupiter and the U.S. Mercury. If Joe Biden succeeds in winning the White House, one can point to all these unique planetary aspects as the corresponding celestial counterpart of his immediate life-process.

Finally, on inauguration day, transit Jupiter will come to an exact opposition with Biden’s natal Pluto at 7 Leo 14, in the Sabian degree of A Bolshevik Propagandist.(2) Here is the origin of Republican fears, that socialist ideals will be at play in a Biden, Democrat administration. The symbol when positive, “is a determination to share the soul’s vision and to make a permanent impact on history.” Perhaps fate will allow the fulfillment of Biden’s vision and pledge of his nomination acceptance speech, to “restore the ‘soul of America’ and erase the ‘darkness’ that has descended on the country . . . ” (3)