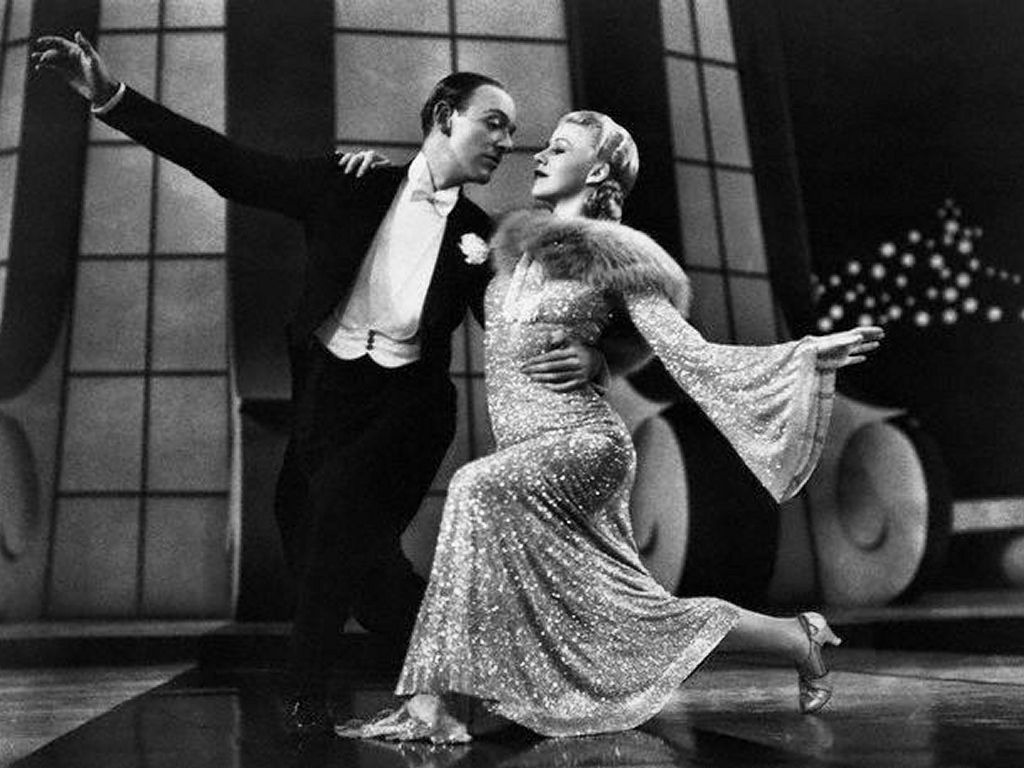 The most famous dance couple in the history of American film, Fred Astaire and Ginger Rogers, teamed up in 1933 when making their dance debut in Flying Down to Rio. They had supporting roles in the film and took second billing, but it was just enough to start them on their meteoric rise together, consisting of incomparable technique and style.

From: Roger’s revealing obituary – the UK’s Independent.
While Ginger went on to other pot-boilers, and Fred to England to do The Gay Divorce on the West End stage, RKO started to plan more films for the team. The Gay Divorcee (title changed to placate Hollywood’s production code) confirmed the team’s magical chemistry and included the first of their classic romantic duets, “Night and Day.” In a deserted ballroom, as Ginger crosses Fred’s path to leave, he blocks he 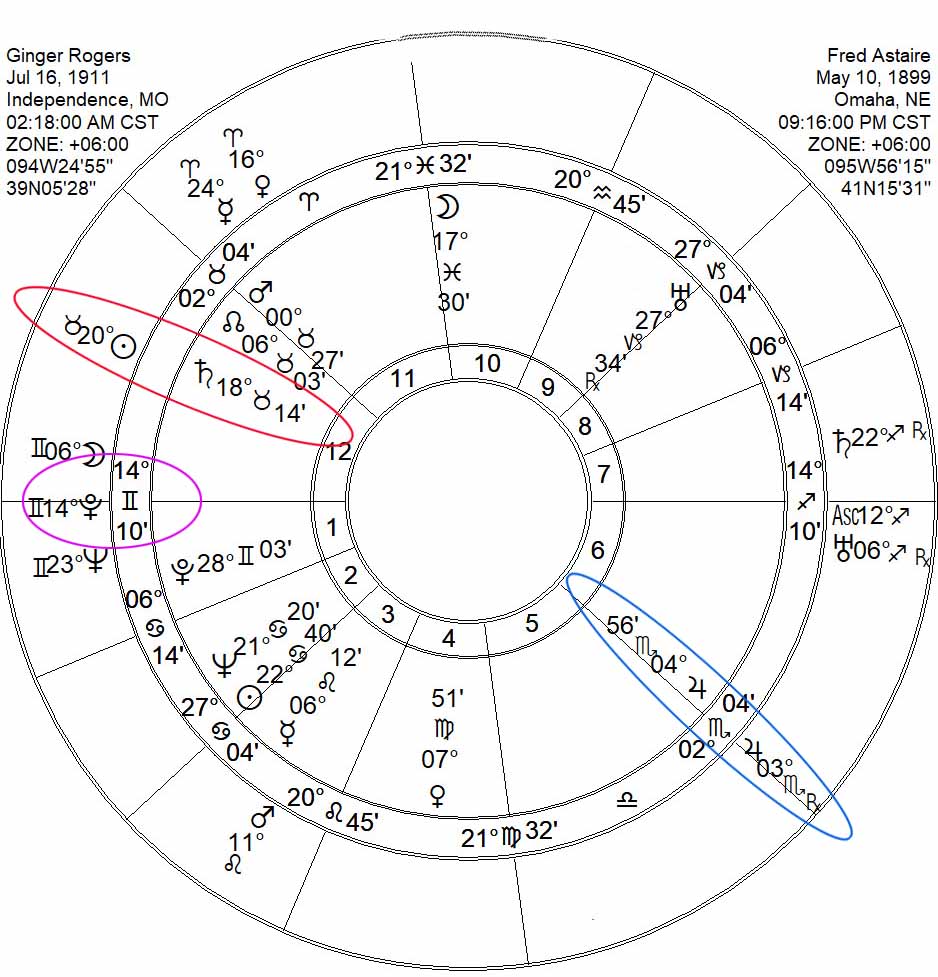 r. Tentatively resisting, she bends her body with his and they start to glide across the floor. The harmony and sensual tension of this sequence is due in no small part to Ginger and demonstrates why she was the greatest of all Astaire’s partners. Not only do they dance as one (“She could follow Fred as if one brain was thinking” said Ben Lyon), but Ginger acts the dance perfectly, never appearing to be reveling in the display of technique or conscious of anything other than the emotions of attraction and seduction implicit in the choreography. Katharine Hepburn’s famed remark “She gave him sex, he gave her class” is true, but conveys only part of their magical chemistry.

Where in the comparison chart’s planetary pairings can the sheer talent and divine elegance be seen? Astaire and Rogers first met for a brief encounter when Astaire was brought in to assist with choreography for a Broadway show where Rogers had a part. They even dated briefly as stated in Rogers’ autobiography, Ginger – My Story. Following that, their first chance to dance in together was when Rogers replaced a troubled Judy Garland who was originally cast with Astaire for the film’s dance scene, The Carioca. The movie was Flying Down to Rio, and the film was virtually an ad for Pan-American because its producer was the airline’s major stockholder. But the movie ended up the vehicle for the beginning of an enchanting ten-year pairing, meant for the entertainment and distraction of captivated audiences while the horror of World War II was in its developing stages.

The chart above has Rogers in the center with Astaire’s planets in the outside wheel, because in their first film Rogers took bi 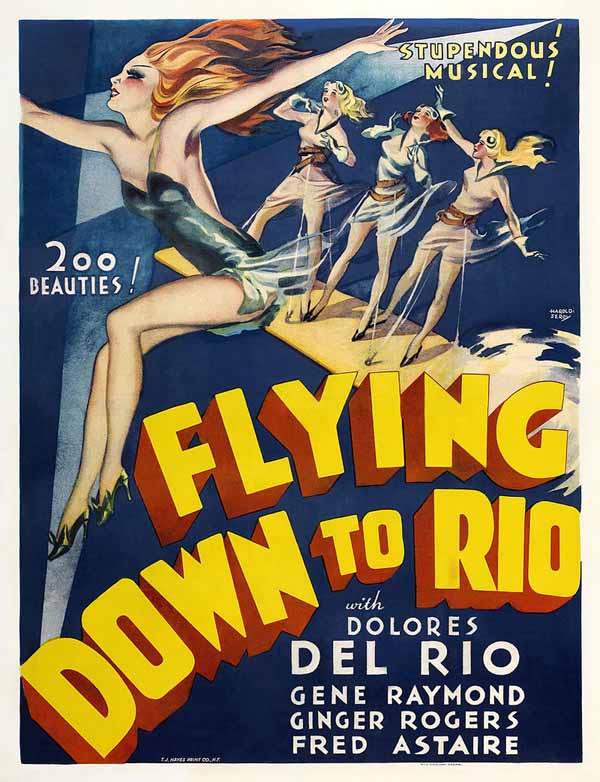 lling over Astaire, as seen in the film’s poster credits.

The astrological ties between the dancers are conjunctions, with no planetary oppositions between their charts. Partners need to be together for the conjunction potentials to manifest, but an opposition between their charts will often draw the two together through a mysterious magnetic attraction even when apart. It is apparent with three conjunctions that the tie was cemented primarily through the efforts and pressures of the film company’s principals and producers. The dance team would flourish as long as they were bound to contracts that held them together. All along, both dancers displayed an underlying inclination to advance their careers independently,* and the lack of oppositions between them eventually brought that hope to fruition.

Their Jupiters conjunct did give the pair a mutual joy in dance and helped to expand each other’s skills and talents. They lent each other personality traits in the way that Katherine Hepburn so aptly stated, “Astaire gives her class, while Rogers give him sex appeal.” The complexities in their dance routines is shown by the Jupiters both in Scorpio, the sign of the CREATIVE. The placement of the Jupiters in the 6th house via Rogers’ natal wheel gives testimony to the unrelenting rehearsals and ever-demanding work-ethic to which the couple was happily devoted. But it was Rogers’ Saturn that brought a sobering quality to Astaire’s Sun and PURPOS 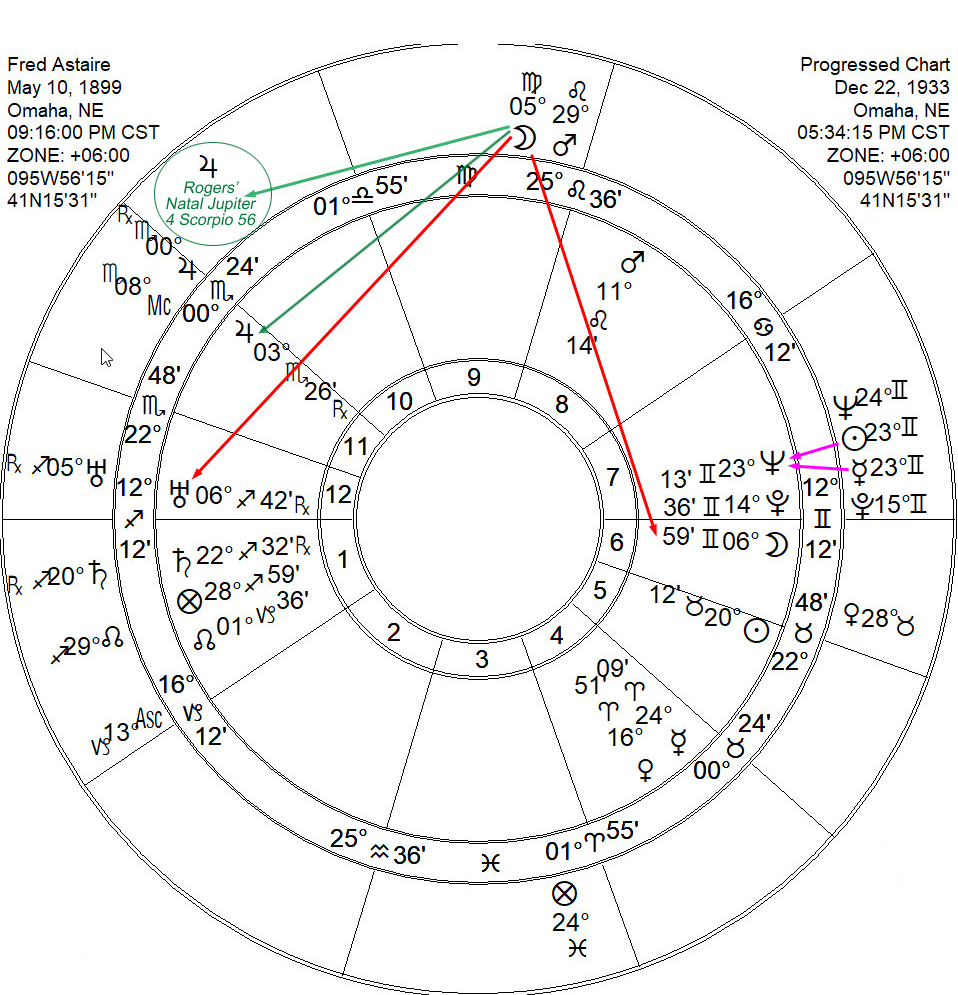 E. Sticking together for ten years is the nature of a responsible Saturn, but in time it will withdraw if not fully satisfied. Rogers was in search of more dramatic roles, and her eventual Saturnian disjunctive departure rewarded her with an Oscar for Best Actress in the avant-garde portrayal of “Kitty Foyle.”

When together, however, Astaire’s Pluto conjunct Rogers’ ascendant brings out the intense passion in the dynamic between the two, especially when engaging their bodies in dance together. His preoccupation with her beauty and grace was an underlying theme throughout the run of their films.

In the chart with Astaire in the center, with his progressions in the outer wheel for the date of the release of Flying Down to Rio, we can see that the all-important Neptune of imagination and glamour is being contacted by his progressed Sun and Mercury. The conjunction takes place in the 7th house of partnership and announces the glamorous tie between himself and his leading-lady with her Jupiter being aspected nicely by his progressed Moon.

Progressions for December 22, 1933, was a remarkable time for Fred Astaire, as he entered the medium that would raise him in time to the pinnacle of his talents and fame. This is evident in the progressed Moon’s placement in the 9th house, as it marks his turning point, progressed squares, that stimulate the very tight natal Moon-Uranus opposition; an opposition between energies that represent an electrical spark with extremities in full-blown Experimentation in dance and public entertainment.

At the same time, there is an easy-going and friendly sextile from the progressed Moon to his own natal Jupiter that, as just mentioned, is in a convenient and harmonious sextile to Roger’s Jupiter as well.

Rogers too, has several Lunar Progressions on December 22, 1933, although the chart is not shown here. There were exact sextiles from the Progressed Moon to the natal Moon and trine to natal Saturn. And Rogers’ Progressed Neptune had finally entered into the degree of her natal Sun, to bring her into the imagination of a nation of dance and music lovers.

Interestingly, although not aspected in 1933, Rogers’ Venus degree is 7 Virgo 51. Rounded at 8 degrees Virgo is the Sabian Symbol degree, First dancing instruction.  The original symbol is; A poor little rich girl, not above five years of age, is given with much attention a first dancing lesson.

VIRGO 8 First dancing instruction This is a symbol of the self-perfecting required for the many different forms of man’s participation in the experience of his fellows, illustrated here in a potential excellence of special skill. The dance of life includes infinite versions of its rhythm and provides illimitable variations on the theme of its melody, but there must be some specific encouragement of individual ability as a stimulus to effective endeavor. Necessary always is that initial trial of self which in time leads to a continuity of effort. The keyword is ASSISTANCE. When positive, the degree is achievement through a personal competence and a high gift for co-operation, and when negative, cheerful acceptance of ineptitude.

All in all, the natal charts and their Progressions are a profound collection of indications that match well the illustrious dancers that embarked upon a “fine (imaginary) romance”** in late 1933.

From: Telegraph.co.uk
*The idea of turning them into a regular act had come from the RKO producer Pandro S. Berman. He told me: “Most of my efforts were devoted to getting Fred to work with Ginger in the film The Gay Divorcee, and then to getting him to work with her again in Roberta, and in all the others. That never stopped – he never got over the feeling that he was being forced into being a member of a team, which was the last thing in the world that he wanted.”

**The song composed by Jerome Kern with lyrics by Dorothy Fields, released in 1936 for Swing Time.