The Sabian Symbol, A woman and two men on a bit of land facing south was the symbol stimulated in Donald Trump’s horoscope, by transit Saturn in opposition to his natal Saturn. On the days when the aspect was exact, one manifestation of it was the January 15, 2020 interview of liberal media host Rachel Maddow with Lev Parnas. He, along with Igor Fruman, was charged in a four-count indictment alleging that each defendant conspired to violate the ban on foreign donations and contributions in connection with federal and state elections. They were both involved with Rudy Giuliani in the scandal involving Trump’s scheme to pressure the newly elected Ukraine President, Zelensky, to announce an investigation of both Joe and Hunter Biden, as well as other probes to make it appear that Uranine, rather than Russia, interfered with the 2016 US presidential elections. Bottom-line, Parnas numerously stated that Trump and others were in the loop; that he knew full well and directed the behind-the-scenes “errand” led by Rudy Giuliani.

It is not fully known why Lev Parnas agreed to an interview with Maddow, however, his conversation with her corroborated all other evidence which was uncovered in the House of Representatives that led to the impeachment of President Donald Trump. The two men in the photograph are Lev Parnas on the far left, and his attorney, Joseph Bondy at the center, and Maddow on the right.

CANCER 24 A woman and two men on a bit of sunlit land facing south This is a symbol of the soul’s necessary decisiveness in the basic allegiances of life, here emphasized in the terms of practical or everyday relations. There must be a mediation between the competing demands for immediate attention to various transient needs, and for some consistent or over-all goal which will bring an individual’s efforts into a cohesive pattern. The inner capacities must be disciplined continually for the sake of a plethora of outer opportunities. The keyword is INCEPTION. When positive, the degree is an unusual gift for organizing and exploiting the self’s potentials, and when negative, a devastating sense of ineptitude and estrangement from reality.

The transit Saturn opposite its natal position in Trump’s chart corresponded with his impeachment by the US House of Representatives. The interview with Maddow most likely was spurred on by Parnas in response to Trump’s denial that he knew him. Other national and worldwide events also correspond with the transit Saturn opposition. Deaths including suicides at the border with Mexico, deaths and displacements of the Sirian Kurds at the border with Turkey, and Ukrainian soldiers dying in their fight against Russia’s invasion of their country are among them. The focus of impeachment doesn’t include these events but are the tragic collateral from Trump’s mishandling of foreign affairs. 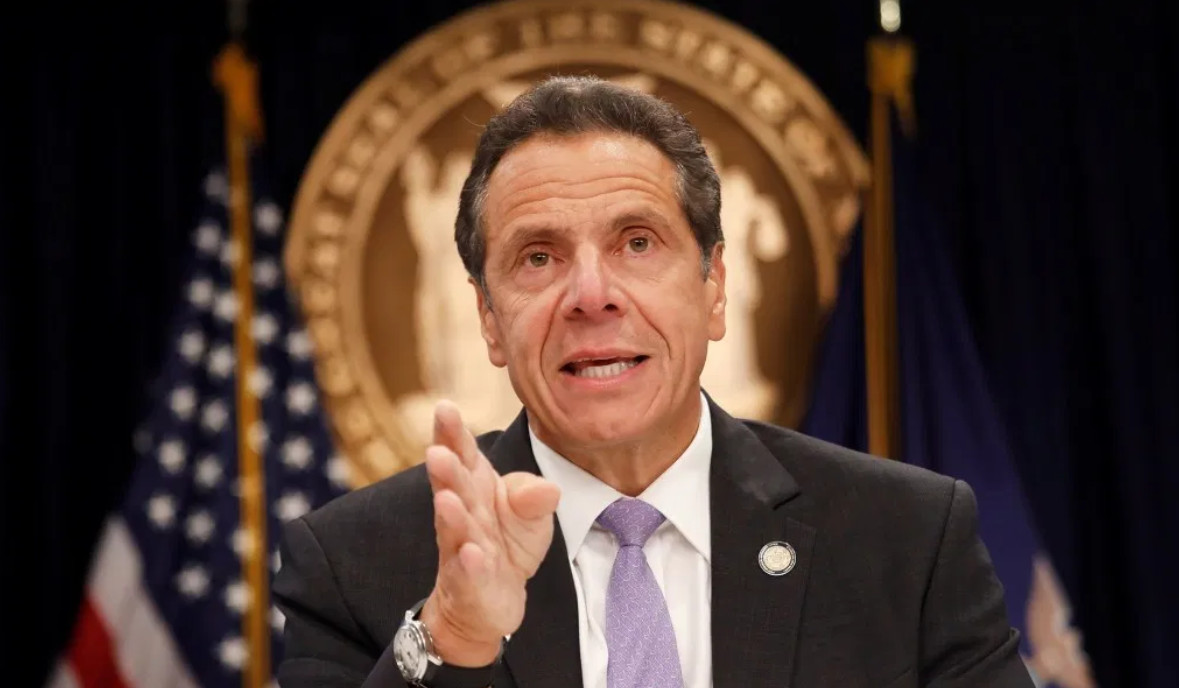 Andrew Cuomo is the Governor of the state of New York. When the coronavirus hit his state, Cuomo “did the numbers” by comparing what was happening in his region with how countries abroad experienced the pandemic. He was frustrated with the lack of quick response to the needs for all types of medical supplies and by his outspoken condemnation of the slow response by the federal government, things began to change and eventually moved forward.

Cuomo was the first to mention publically that although there was an abundance of test kits, there was a lack of follow-through on receiving the results from federal laboratories. After days of “pounding” the Trump administration, and communicating directly with him, the state laboratories Cuomo wanted to mobilize were finally freed to 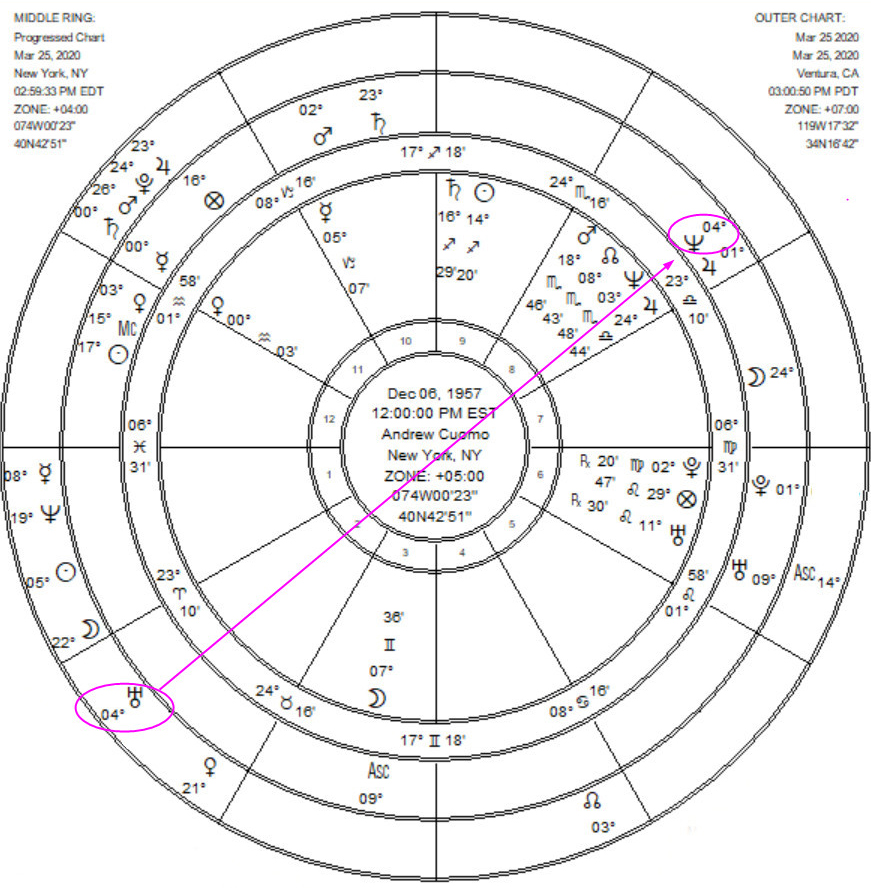 The chart for Andrew Cuomo is missing the time of birth, leaving the placement of the Moon and the location of planets through the houses questionable. The powerful dynamic that is active in the chart, that puts Cuomo in a place of leadership, is his progressed Neptune, two years in the formation of an intensifying station-retrograde (Figure 2). Neptune moves slowly and can identify pertinent events that possibly take place a year or more outside of the actual station.

Authoritative is a keyword for Neptune, for which Cuomo has shown great capacity. Neptune is a planet closely associated with the medical field. It rules hospitals and healthcare in general and works in partnership with Uranus as the planetary pair of Significance.

Transit Uranus is in opposition to progressed Neptune, which can be seen by the arrow pointing from the proposed wheel from the 2nd house to the 8th. Cuomo is the surrogate leader of New York state and his birth potentials extend to the people under his administration. The tension of an opposition aspect well-describes the awareness of the magnitude and critical concern felt by both the Governor and the people to whom he is responsible.

The Sabian Symbol for the Neptune station at 5 degrees Scorpio is A massive rocky shore.

The symbol reflects the immediate situation faced by all New Yorkers.

This is a symbol of the dependability of the physical universe whenever man holds the center of reality within himself and uses the static constituents in nature as a sustainment for his essentially dynamic being. Implicit in the symbolism is the need for a direct and continual attention to the overall interests of the self at every point in life. Here is an exaltation of pure experience in its eternal and universal lineaments. The keyword is STABILIZATION. When positive, the degree is a poised spirit and a firmness of personality which enables every individual to prepare himself and his fellows for any possible contingency, and when negative, blind stubbornness or unreasoning conservatism.

The Sabian Symbol for transit Uranus at 5 degrees Taurus, A widow at an open grave, is also alarmingly enlightening.

This is a symbol of the impermanence of physical things whenever man permits reality to come to center in the static representation, and thus neglects the creative contribution through which he has responsibility for the larger whole. Implicit in the reversed symbolism is the need for an inner and constant return to every enduring value achieved by the self, and for a complete and immediate release from all outworn elements of experience. The keyword is REORIENTATION. When positive, the degree is man’s genius for personal aplomb or an effective transcendence of disappointment and delay in an ever-spiraling self-discovery, and when negative, surrender to frustration or descent to ineptitude.

The coming progressed Mars trine Pluto, indicated in Figure 3 will be exact on April 9, 2020. This may bring some good news, however, the progressed Sun squaring Mars is an aspect that will just be starting, showing that stressful circumstances will continue in spite of when the Mars trine takes hold. The Uranus transit will still loom over the situation, with the station on August 16th, only to retrograde back to its opposition to progressed Neptune. It will retrograde until its station-direct mid-January 2021, just two degrees of separation from the tense and formidable aspect that is associated with the collective challenge to New York and its besieged population.