Hillary Clinton emerged for the 2017 Code Conference in Palos Verdes, California to open up and speak about how she’s feeling six months after losing the US presidential campaign to Donald Trump. The chart shows the planetary Transits of the conference day and her Progressions as they affected her natal horoscope and brought her once again into the public arena.

Transiting Saturn (red arrow in chart) was exactly opposite Hillary’s natal Uranus on the day of the conference. The Sabian Symbol for Uranus at 26 degrees Gemini is, Winter frost in the woods. She made her unexpected (Uranus) appearance precisely when the time-keeper Saturn designated. Finally, her sense of integrity (Saturn) had an outlet for expression when the Opposition gave her the opportunity. It was her chance to express her views in direct contradiction to the radical and damaging accusations cast upon her during the campaign, shown by an unruly Natal Uranus in the 8th house of social acceptance. She has had time to reorient herself as the planet and Sabian Symbol’s positive point suggests (shown in blue). And as a result, she was able to materialize her perspective that is often projected into the world during times of polarizing, Transit Oppositions.

GEMINI 26  Winter frost in the woods  This is a symbol of the cosmic significance in any momentary cancellation of the more immediate interests and private concerns, and the em­phasis is on the supremacy of the needs and powers of nature over the aspirations and conveniences of man. Implicit in the static symbolism is the call for a reorientation in the individual’s point of view, and for some further discovery of the self’s potentials. Normal life is brought to a point of sharp suspension so that the larger magic may be manifest. The keyword is SPLENDOR. When positive, the degree is the creative transformation by which older cycles give way to newer ones, and when negative, a reduction of the useless to a total annihilation.

Also exact in Aspect (green arrow) is Hillary’s Progressed Moon making a supportive Sextile to her 9th house natal Saturn in the Sabian Symbol of A carrier pigeon. H 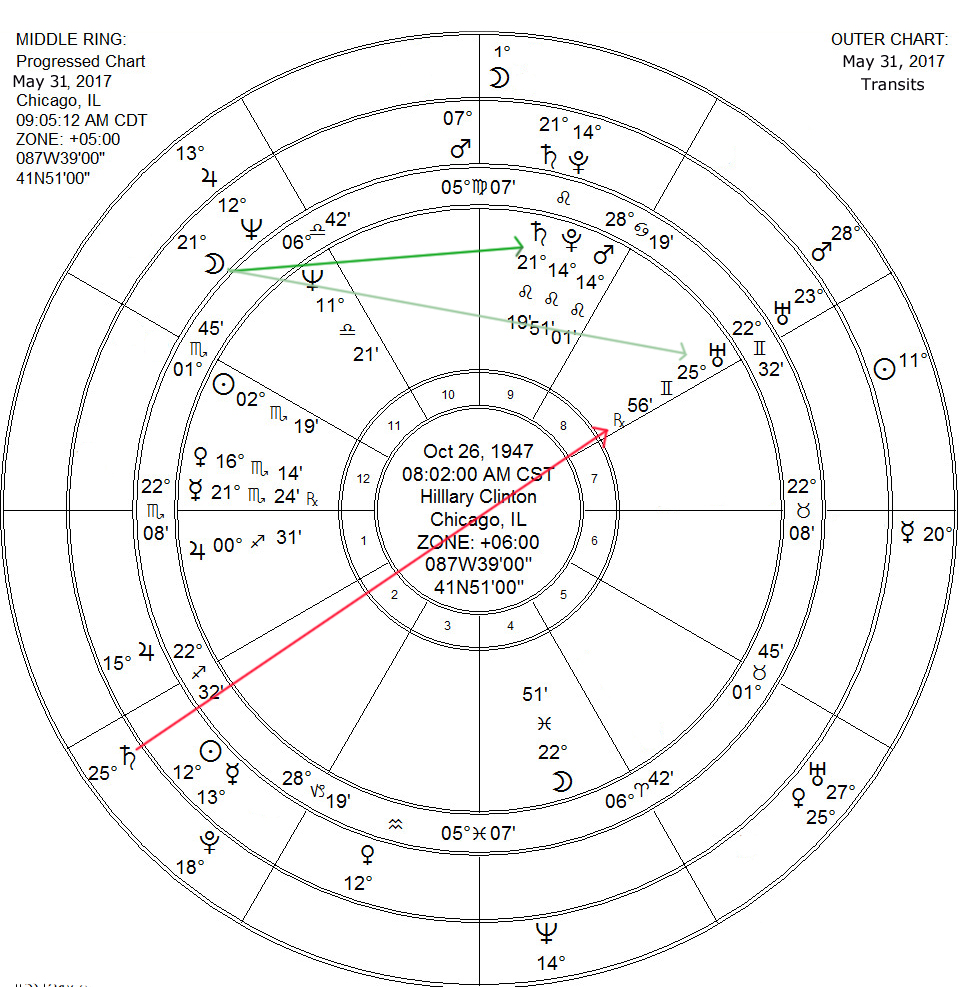 ere we see, in the symbol interpretation, the intelligence we know her to possess. But having no Natal Opposition potentials in her chart started her off in life with disabling mental blocks to the challenges she’d face throughout her career. She is doggedly going about following her intuition as the symbol below points out, but lacking an Opposition she’s missing the firm anchor in the outer world to stabilize her, and this weakens her ability to project and sustain her vision. This causes the negative of the symbol, highlighted in green below, to manifest a bit too often for her own good. Examples are the health care debacle of the 90’s, the issue of her vote to go to war in Iraq in 2002, and more recently in 2016, the controversy over sending classified information through her private email server.

LEO 22  A carrier pigeon This is a symbol of the unlimited service of life at large to the special requirements of an individual’s intelligence or understanding. Implicit in the symbolism is the extraordinary extent to which man may Count on learning whatever he may need to know whenever he faces any unfamiliar or critical issue. Here is a universal sensitiveness of mind which in a sense commands all-knowledge, and receives messages of immediate pertinence through sheer intuition whenever its rational capacity has been developed. The keyword is ENLIGHTENMENT. When positive, the degree is a complete mastery of all things through the normal processes of thought, and when negative, a lack of simple good sense.

To comment on Hillary’s Natal chart, we can easily see that her Temperament Type* is a SPLAY. There are the three distinct and required segments, with the Moon set off by itself becoming the High Focus Reins planet in the 4th house of overall inner consolidation. The Moon’s Sabian Symbol is 23 Pisces.

PISCES 23  Spiritist phenomena This is a symbol of the organic integrity of the world at large, evident here in man’s facility for actual and conscious co-operation with the potentials of an immortal reality. Implicit in the symbolism is the fact that the individual will be conditioned increasingly by the caprice of his ideas and the mishaps of his experience unless he gives continual attention to the realms of reality he has thought to make particularly his own. He achieves as he holds a clear picture of the end results he desires. The keyword is SENSITIVITY. When positive, the degree is exceptional ability in shaping every immediate aspect of life to a personal convenience, and when negative, instability and confused perspective.

There is no Grand Trine to create a grove in activity for the momentum needed to easily arrive at the ultimate position she’s longed for over the years. And there are no planets in the 10th house of professional standing, which again leaves her at a disadvantage and stumbling. Also lacking are other chart features that would otherwise help to reach the place in life she covets. Although a courageous public servant, Hillary’s highest points in her career were virtually given to her first by her husband’s powers of administration while president of the US, and second through the appointment as Secretary of State by Barak Obama. By her own efforts she was voted a Senator for New York State, but not until after proving her abilities from previous assisted accomplishments. The Splay can produce a complex and inwardly stable potential, and Hillary’s physical and emotional stamina certainly owes much to this particular Temperament Type. But the negative of the Moon’s symbol shown in blue, is an ever-challenging threat to the Splay’s stabilizing potentials. Another challenge comes from the sometimes self-sabotaging feature of a Sun in the constraining 12th house, which is also the clue to her dependence on the initiative of others for support and direction.

By the end of 2018, we’ll see Transit Uranus make an Opposition to Hillary’s Natal Sun. This will undoubtedly propel her once again into the arena of public service in perhaps a more unique manner than usual.