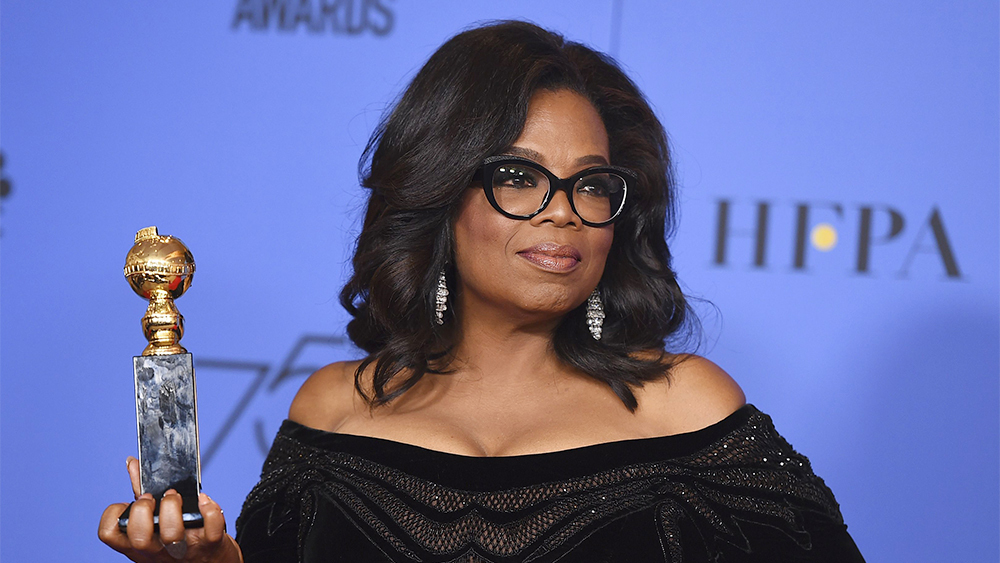 Oprah Winfrey came from obscure and impoverished roots, but she worked her way to the top through sheer and dogged self-effort. Configurations in her horoscope are testimony to her gifts, stamina and all-around destined good fortune. Her chart also reflects, through strong Oppositions and Squares, the stresses and personal struggles that were her fate to overcome, so that she might manifest the wonder of her potentials “written in her stars.” 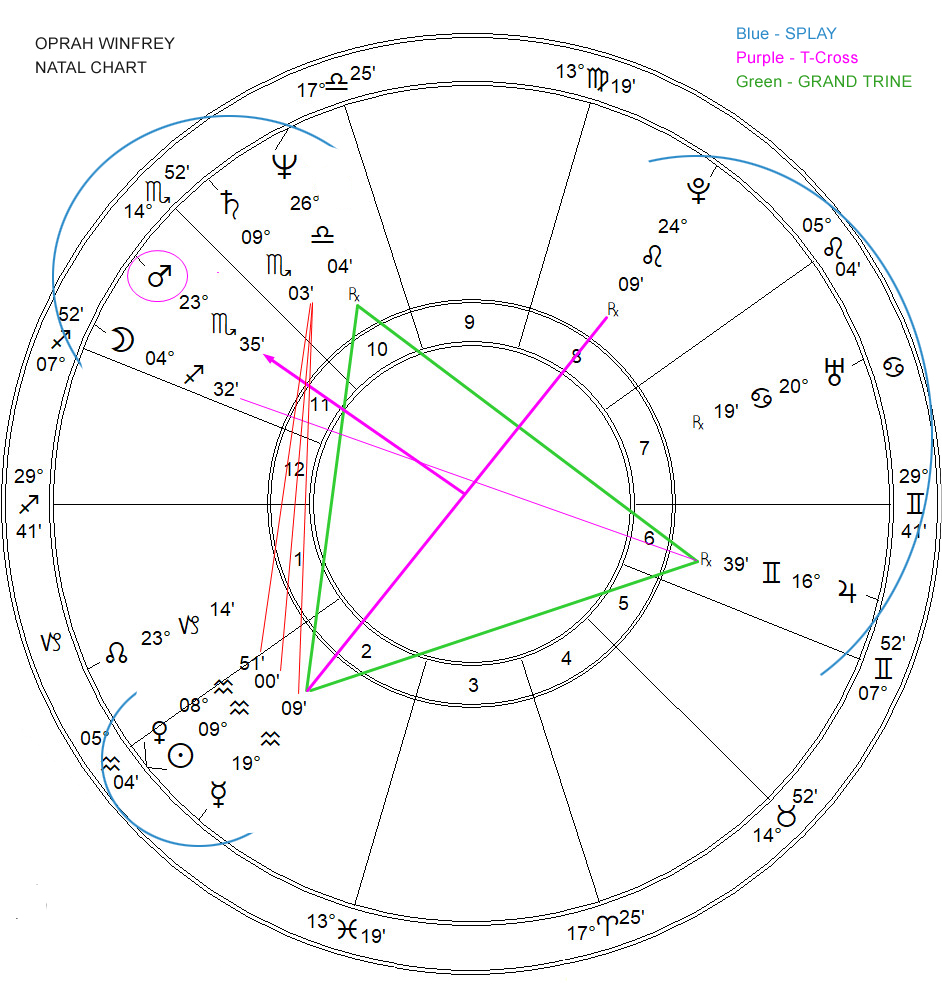 Oprah’s horoscope forms ideal planetary configurations in several ways. There is the presence of both Fixed and Mutable Oppositions which causes a dueling demand for attention between the differing interests defined by the two triplicities of the Fixed and Mutable signs. To resolve the dilemma of warring interests the one Triplicity that does not appear though an Opposition Aspect, defines the Natural Disposition, or what the native of the chart should be inclined to make their most important interest in life. For Oprah, it is the missing Cardinal Triplicity of planets that points the way for her to be interested in promoting herself as a personality, and to be politically minded with an interested in solving problems and crises she herself experiences and also to assist others in means and ways of resolving difficulties.

Defined by the geometric patterns the planets form from the Earth’s perspective.

There is a distinct and highly developed Splay Temperament Type in Oprah’s chart and a Grand Trine that connects the three segments of her pyramiding personality represented by the more evolved Splay pattern. The personality builds with a continuous momentum toward a profound and highly unique self-expression. In Oprah’s case it is an air Grand Trine that moves her in the direction of intellect with a desire to share ideas of great import.

Defined by two out of four Planetary Pairs in Major Aspect.

Oprah’s Mode of Self-Integration is Conjunctive Activity, shown by the Sun/Moon and Uranus/Neptune major aspects. Mars/Venus and Uranus/Neptune These allow her to bring all the vastly wide experiences she encounters together to lead her life story.

Oprah’s vital T-Cross has Mars in Point Focus in the Sabian Degree of Crowds coming down the mountain to listen to one man – this being a most literal expression of what has transpired throughout her career.

SCORPIO 24 Crowds coming down the mountain to listen to one man This is a symbol of recognition for intellectual attainment, and of the supremacy of spiritual over other and more tangible forms of authority among men. There is here an emphasis on the fact that any higher realization must be brought to earth both for its initial confirmation and its ultimate sharing among the many, and that aspiration is meaningless until it achieves some practical focus in those realms and events with which people in general are familiar. The keyword is APPEAL. When positive, the degree is an almost spectacular ability to enlist the higher potentialities of everyone for some practical need of the moment, and when negative, indiscriminate and carefree gullibility.

The many Squares in the chart, shown by the red lines and the T-Cross with Mars reveal the chart’s propensity to make use of emotional and physical struggle as way of moving the native toward self-development. In her youth, Oprah experienced abuse of several kinds, that only encouraged her to overcome all the blocks that normally are set-backs to others less endowed with advanced features that Oprah’s natal horoscope exemplifies.

No planets in earth signs creates the need to find a security in one’s self.

Oprah’s life reveals that the potentials given to a person from the horoscope at birth can indeed be fulfilled. Many charts have profound configurations, but there often can be less ability on the part of an individual to manifest good results. In Oprah’s case, her life efforts have been a match for extraordinary features her chart represents.