The animation shows Mars in its retrograde motion in 2003, and the diagram below is a map of the movement of Mercury retrograde.

We know it is not possible that planets actually change direction in their orbits to retrograde and change back again to direct motion, but from the earth’s perspective,  all but the Sun and Moon, appear throughout the year, to slow down, stop, and change direction, caused by their differing speeds in relationship to the speed of Earth.

Retrograde planets do have their effects, however, they are largely subjective in nature. Life manifests through the principle of polarity. All that is subjective, mental or inwardly oriented, must have an existential component to complete two-fold experience. What is actually occurring, for those who “feel” a retrograde, is that they are experiencing an activation in the electro-dynamic field of the human mind. Outer reality and inner reflections are a closed circuit in the multi-layered, unified manifold universe.

Planetary positions in the solar system are registered by the naked eye or telescope, but their field of influence penetrates far deeper and wider than their visual and physical bodies. Spheres pulsate in waves of electromagnetic energy, caused by the rotation of their axes, as well as in the circling of their orbits. We are the antenna and receiver of the intelligent impulses of the mysterious and non-local entanglement, whereby all things are in relationship to each other. Historically, this principle was referred to in the simple description, “As Above, So Below.”

Consciousness is all-encompassing, and the illusion of the path of retrograde planets has us believing that we take our commands from an outside source. We are a living mirror of subject and object, as one whole experience.

Planets in retrograde motion are felt within us as we observe their outer existence and motion. They are a reflected marker of a timing device that appears in the space referred to as the solar system. We grow in conscious awareness as we are challenged by stressful experiences, marked off in time by transits and progressions, and other astrological phenomena. However, the greatest catalyst for change and heightened experience comes when a solar satellite approaches a period of standstill or station, in preparation to temporarily enter a retrograde phase. These are station-retrograde and station-direct periods that are harbingers of eminent transformation, either in great or small ways, depending on the nature of the planets and their applying and separating geometric configurations. 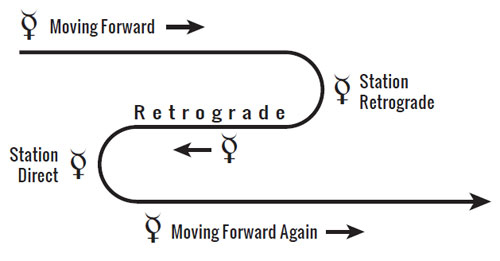 Mercury retrograde events are becoming more known by the general public, and through that familiarity, there is more acceptance and respect for this celestial phenomenon as explained astrologically. However, understanding why Mercury in apparent backward movement is synchronous with a break in the efficiency of the conveniences of life is still for most not understood. During Mercury retrogrades, a concern for private and public transportation dependability arises. The functioning of the internet and digital technology and its devices can be compromised, and among many other 3rd house subjects, the reliability of high-ticket purchases becomes questionable. All these issues potentially surface during a Mercury retrograde because 3rd house circumstances relate to all things performing without interruption to bring convenience to daily living. Retrogrades are notorious for the reversal of the convenient functioning of taken-for-granted activities.

Flaws that show up in a contract and their consequences, the malfunctioning of kitchen gadgets to automobiles, etc, can surface during retrogrades. The remedies for these and for illnesses and physical limitations is a 6th house matter because of Mercury’s rulership in these matters. Mercury is associated with normal routine, and retrogrades periods can be a great disruptor. Life manifests in the form of opposites. So it should be no surprise when Mercury turns retrograde, the opposite of what is expected to happen is inevitable. The 3rd house taken-for-granted conveniences and the 6th house need-for-adjustment work hand-in-hand when Mercury is direct, keeping our lives functioning smoothly.

The Meaning of Retrograde Outer Planets

For planets that are slow-moving and complex in their meanings, the development is more serious and may take years to complete the transformation required by their reverse direction. These retrograde times are important also for seeking solutions to long term problems.