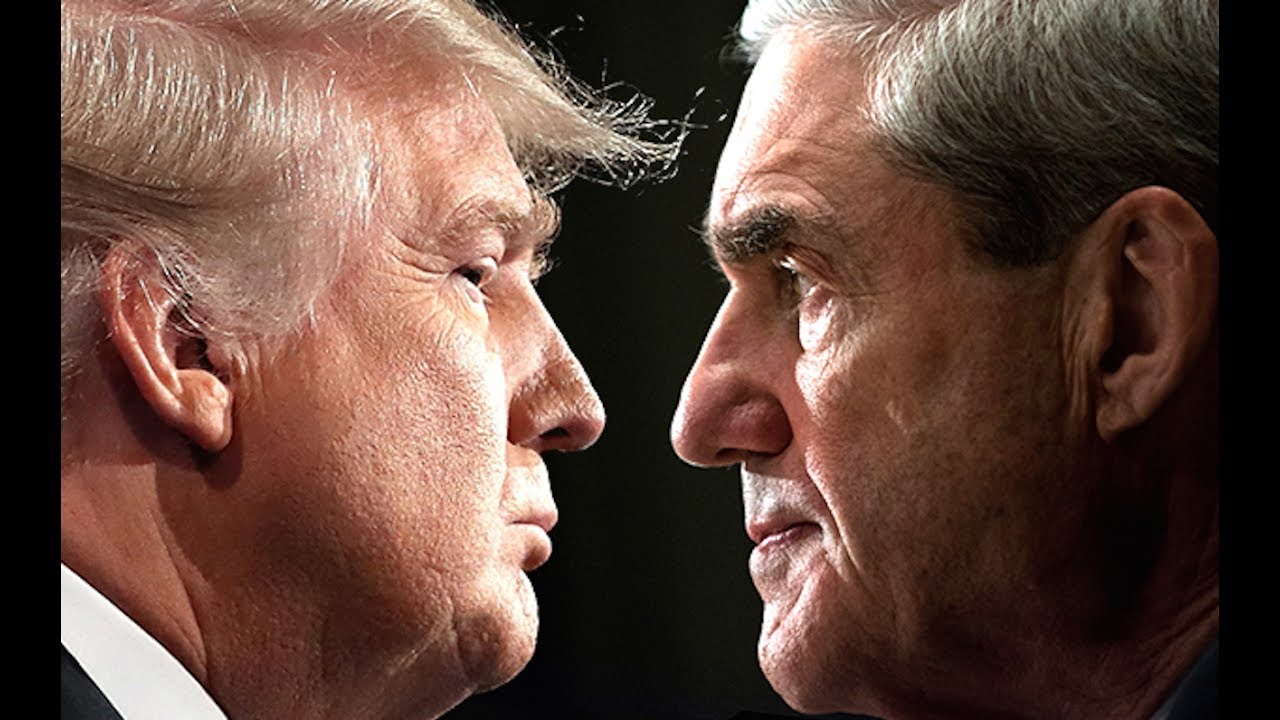 Donald Trump and Robert Mueller share one of the 360 Sabian Symbols with the cross-tie between Mueller’s natal Venus at 26 Leo 27 applying to Trump’s natal Mars at 26 Leo 47. The mutual Conjunction is within a mere 20 minutes of arc, resulting in the symbol of Daybreak as the degree is rounded to Leo 27. Mueller’s Venus is the provocative, applying planet to Trump’s Mars that is separating from the Aspect to distribute the energies in somewhat antagonistic fashion most of the times. Trump is known for his fretful reactions and damaging remarks toward the unrelenting Special Counsel through his early morning (daybreak) tweets to the world.

The original Sabian Symbol of 27 Leo is more detailed; Over at the eastern edge of night the streaks of dawn appear, gradually the mounting light wipes out the stars. This is a reflection of the dramatic and imposing character of both men as they overshadow and dominate any and all other individuals or matters at hand. 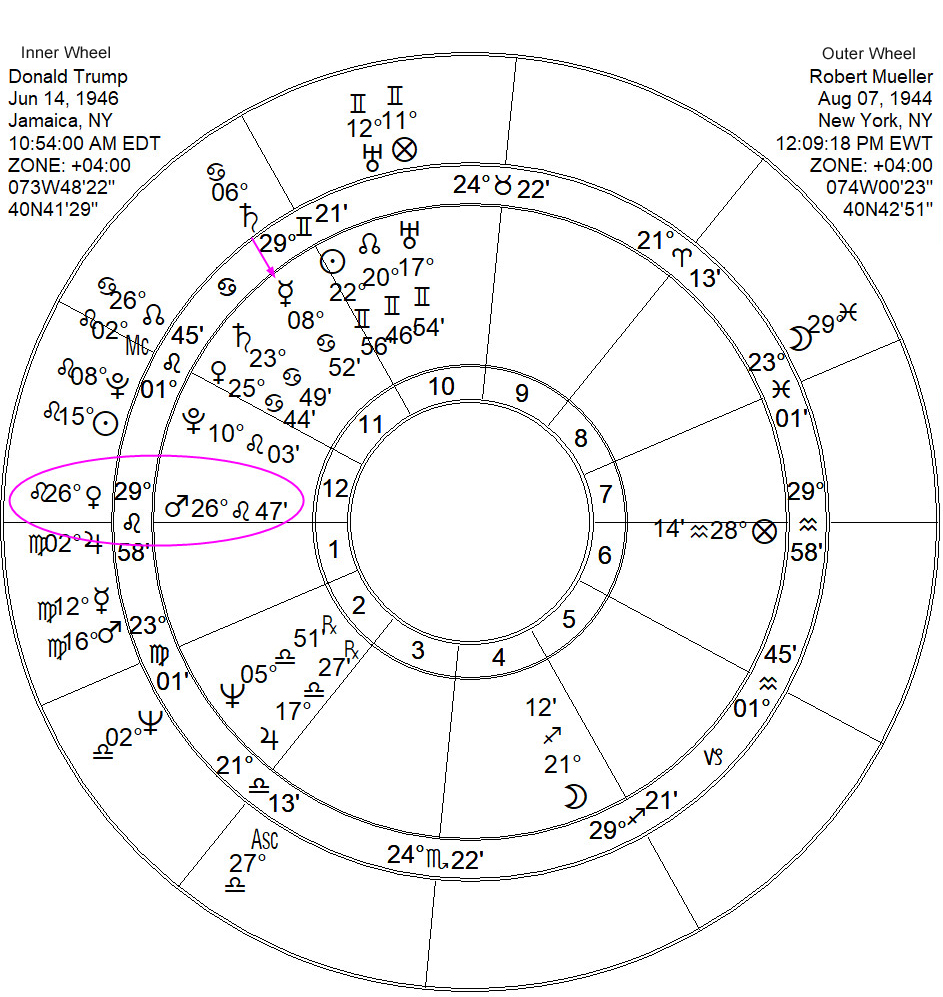 Trump’s Mars is located on his Ascendant, which curiously is affiliated with the early hours of dawn. There in the east, is where all planets break into the light of day as they commence their journey through the southern hemisphere. The Sabian Symbolism is continuously validated, by innuendo or uncanny likeness, as they magically manifest from the phenomenal to the actual world.

Another cross-tie between the two charts and the two men is shown by the short magenta arrow in Trump’s 11th house. It is Mueller’s Saturn Conjunct Trump’s Mercury. Again, the planet of impetus, by virtue of application, lies in the hands of the prosecutor. The Saturnian pressure of the probe into the 2016 elections and Russia’s influence in that regard has weighed heavily on the Mercurial attitude of the President. Mueller’s Saturn represents what is often referred to as a “cloud” over the Trump White House, and its symbol at 7 degrees Cancer is Two fairies on a moonlit night. Its keyword ASCENDANCY reiterates and supports the meaning of the cross-tie we see in Daybreak and its position on Trump’s eastern horizon. Whether at dawn or in moonlight, as the elfin degree describes, the two men are inextricably tied through combined potentials.

It is Mueller’s responsibility, through his serious and penetrating Saturn impulse, to probe into the fine details of Trump’s daily interactions and communications represented by his natal Mercury at 9 degrees Cancer in the symbol of A tiny nude miss reaching in the water for a fish. The entire symbol is given here, because the content vividly reflects the actual nuances of Trump’s thinking and attitude represented by the planet Mercury. Some are attracted to the unencumbered approach of the President in his impulsive reaching out to apprehend the unwary, and others are simply appalled by his naive and often thoughtless actions.

The first sentence of the symbol below describes Trump’s enthusiasm as he took the helm of his new administration. The second sentence corroborates the natal potentials of his Uranus/Sun Conjunction, and refers to his untethered interactions with everyone, including foreign leaders. And the positive and negative descriptions in the end, speak candidly for themselves.

CANCER 9 A tiny nude miss reaching in the water for a fish  This is a symbol of the eternal and unsullied freshness of soul as it enters every new experience with an unabated enthusiasm and thereby both substantiates its divine estate and brings enduring significance to whatever it may touch. Here is the absolute lack of inhibition which enables man to grasp the reins of control in every realm he decides to make his own, and the unquenched and simple curiosity which virtually makes it impossible for any potentiality of being ever to escape him. The keyword is INCLINATION. When positive, the degree is ingratiating and irresistible capacity for self-expression, and when negative, continual indiscretion as a bar to any appreciable achievement.

THE POWER OF THE ECLIPSE

The total solar eclipse of August 21, 2017 at 28 Leo 53 was Conjunct the Ascendant cross-tie between Trump and Mueller. There was also a tighter Aspect with the partial solar eclipse at 27 Aquarius 08 that was Opposite the cross-tie and on the Descendant. The eclipses from the 1st to the 7th houses of Trump’s chart, in his first year of office, intensified the impact of his personality on the lives of others and brought attention to the profound effect the Special Counsel would have on his general outlook. His natal Mars was activated by the eclipses, one a Conjunction within a few degrees and the other in almost exact Opposition to it. The stimulated initiative quickly morphed into resentment when the investigation continued in spite of the firing of then FBI Director, James Comey. Trump’s Mars impulse to lash out toward Comey backfired and created an even greater challenge to him by the more honorable and formidable Robert Mueller, who then took over the investigation as Special Counsel.

Many astrologers predicted a catastrophe would befall President Trump, because the Total Solar Eclipse fell on his Mars and Ascendant. They refer to leaders or kings that are often born or die, or are deposed from office on an eclipse. But in Trump’s case it brought intensified attention to his personal powers of coercion, and to his bigger-than-life, bombastic personality. Trump is in the news 24/7, and there is no end in sight until 2019 when there is a turning point in his Transits and Progressions, namely the momentous Progressed Lunation and Transit Pluto Opposite natal Saturn. See: Trump and the Dynamic Aspects 2019 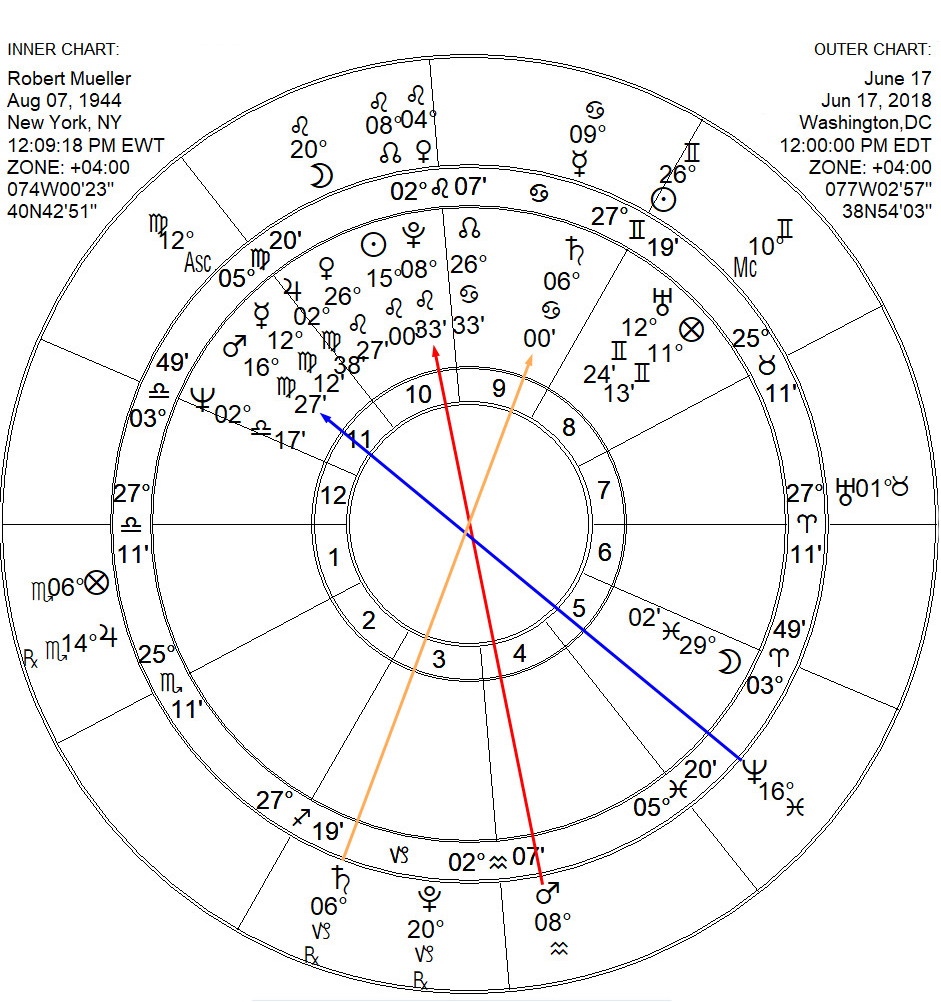 The Special Counsel, formed on May 17, 2017, has been in progress for approximately one year. The upcoming Transits that make powerful contacts within Mueller’s natal chart mid-June 2018 may point to some type of climax in the matter. At the very least, the release of more outstanding information can be expected. When several Transits are simultaneously active, it amplifies the intensity of potentials. When there are Opposition Aspects a manifestation on the physical plane is imminent. It is a time of bringing things to fruition, much like during a Full Moon.

The Transit Aspects culminating for Robert Mueller, on or about June 17th are; Transit Saturn Opposite natal Saturn shown with the light orange arrow; Mars in Opposition to natal Pluto shown with the red arrow; and in blue, the Transit of Neptune in Opposition to natal Mars. Transit Neptune is of great interest because it Stations to go Retrograde in exact Opposition to Mars June 19th. Neptune’s Station activates Mueller’s Mars in the Sabian degree of A volcano in eruption. This ominous and powerful symbolic image anticipates an impending explosion of facts. And for even more emphasis on this overwhelming display of planetary force is the Station Retrograde of Transit Mars due on June 27th. Mars will be in exact Opposition to natal Pluto. These are formidable planetary relationships promising some grand outcome of pent-up energies.

Although these Dynamic Opposition Aspects occurring in Mueller’s chart are not affecting the cross-tied planets with Trump, they will inevitably be a cause for concern for the President.

The Special Counsel, in its probe to uncover the truth of Russia’s involvement in the US elections, and possible cooperation by Trump or his campaign associates, concluded that although there was not sufficient evidence for further indictments, there were over one hundred contacts between the campaign and Russian operatives of a dubious nature.

*It is difficult to get a sense of what may occur when a time of birth is unknown as in the chart for Robert Mueller. Without an exact time of birth there is no clear understanding of what situations and circumstances are being stimulated by Transits and Progressions, and the basic potentials of the natal chart are not certain. But much can be gleaned, using Marc Edmund Jones techniques, in spite of not knowing the house positions of the planets.

Without the time of birth we are not privy to the Moon’s degree in the sign it occupies, which is vital when calculating Progressions. The Progressed Moon Aspects are a goldmine of information letting us know when the native is wholeheartedly involved in their own current affairs. Being engaged in circumstances in life is shown by active major Aspects of the Progressed Moon. When the Progressed Moon is not in a major Aspect the native may be in a holding pattern until its next major, applying Aspect. The Moon is the prime indication of the native’s degree of emotional connectivity with environmental circumstances. Planets, including the Sun, are unlike the Moon, in that they represent general developments taking a greater duration of time to manifest results.