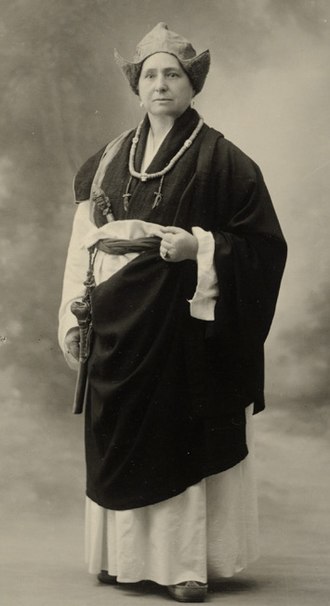 The horoscope of the seeker and prolific writer, Alexandra David-Neel is outstanding in the combined configurations of a Grand-Cross with a Grand Trine that are linked through the planet Mars.

She set her sights on Tibet at a very young age and because of that was able to sneak into Lhasa in the wee hours of the morning in the heart of winter 1924.

Her Temperament Type is a Splash and proves the pattern’s versatility, allowing her to live in at least two worlds, Europe and Asia, with her heart set primarily on her life-long objective – Tibet. Planets equally distributed around the horoscopic wheel give the native the ability to wear many “hats” in a world that offered so much still undiscovered.

Her Fixed Grand-Cross is the indication of being caught in polarized conflict between various opportunities her world had to offer. Through the internal struggle of a multitude of squares, they yet gave her the impetus to break away from the momentum-programming of a Grand Fire Trine. The elevated High Focus Uranus (circled in pink) gave her the ability to go beyond Western environment to seek the unfamiliar, in the spirit of adventure and experimentation for which Uranus is known. A typical longing defined by the planet Uranus, she states, “I craved for a life beyond the garden gate, to follow the road that passed it by, and to set out for the unknown.”

This she experiences through Pluto opening the door to new horizons with its preoccupation with yet undiscovered realms. The Sun in opposition with the obsessive Pluto gave direction for her unstoppable drive toward new frontiers.

Scorpio 2, A broken bottle and spilled perfume This is the symbol of man’s real power on making his permanent impact on others, dramatized at each moment of issue and crises by a completeness of the self’s flow out and into every last ramification of the given experience. There is in the reversed symbolism an irrevocability of the self-expression which marks every individual’s divine determination to be significant at all costs. The chrysalis of being is burst open in what may well be tragedy for anything short of a supreme self-dedication. The keyword is PERMIATION. When positive the degree is persistence in creative effort and utter fidelity to the inner essence of selfhood, and when negative, witless dissipation of every resource of self and society.

Her Anglo drive to conquer new worlds is emphasized in the symbol’s line, “. . . determination to be significant at all costs.” Her writings were prolific and give testimony of her achievement in being the first woman to enter the sacred land of spiritual enlightenment. Whether her goal wa 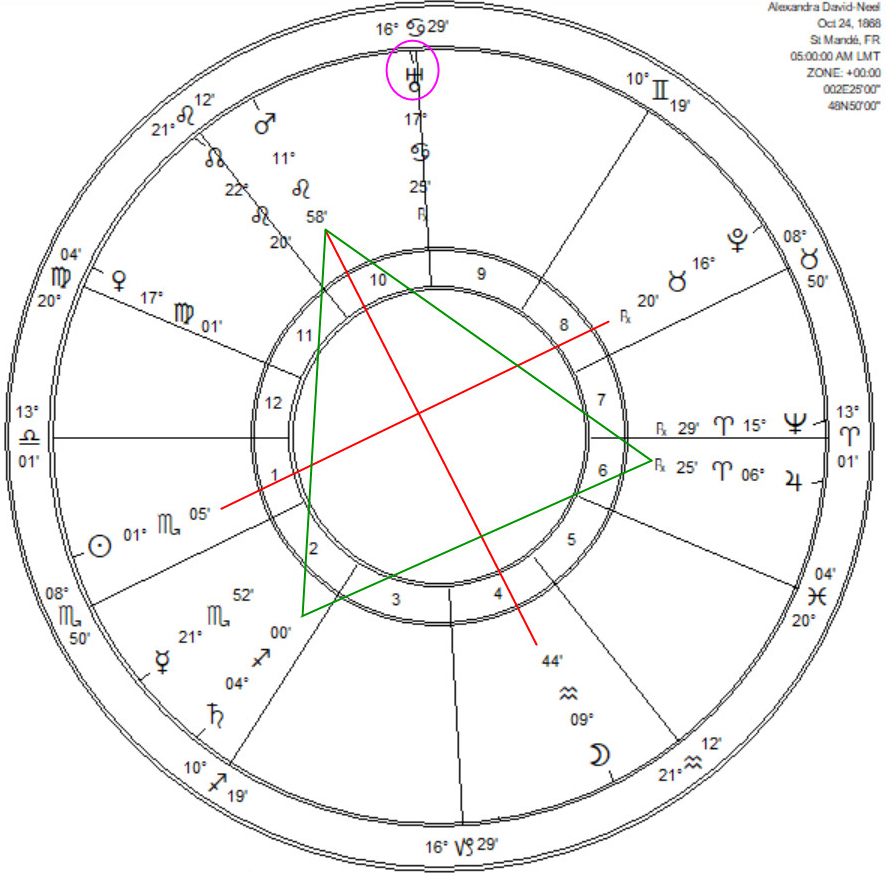 s truly to introduce this unique land and its otherworldly practices to her own homeland and culture or to bring notoriety to herself through her courageous accomplishment may never be known. Some individuals who seek to embrace the benefits of exotic lands and ultimate truths receive accolades for themselves through book-signing circuits.

Seeking to humble herself through the Buddhist tradition, David-Neel yet found a way to give herself credit and esteem through the books she had published exalting her own experience in the remote Himalayas and the world of monks and aesthetics of denial.

Her Sabian Symbols betray her attempt at humility regardless of her profound accomplishment in bringing to herself the unique status of the first foreigner allowed into the forbidden city, and to then share her glorious victory in the walk into Lhasa, and share with the more materialistic world the discoveries and friendship she developed with the 13th Dalai Lama.