Adam Schiff’s comprehensive grasp of the factors involved in the impeachment of Donald J. Trump is reflected in the Sabian Symbol of his Sun-Venus Cazimi (1) at 2 degrees Cancer, A man suspended over a vast level place. (2) 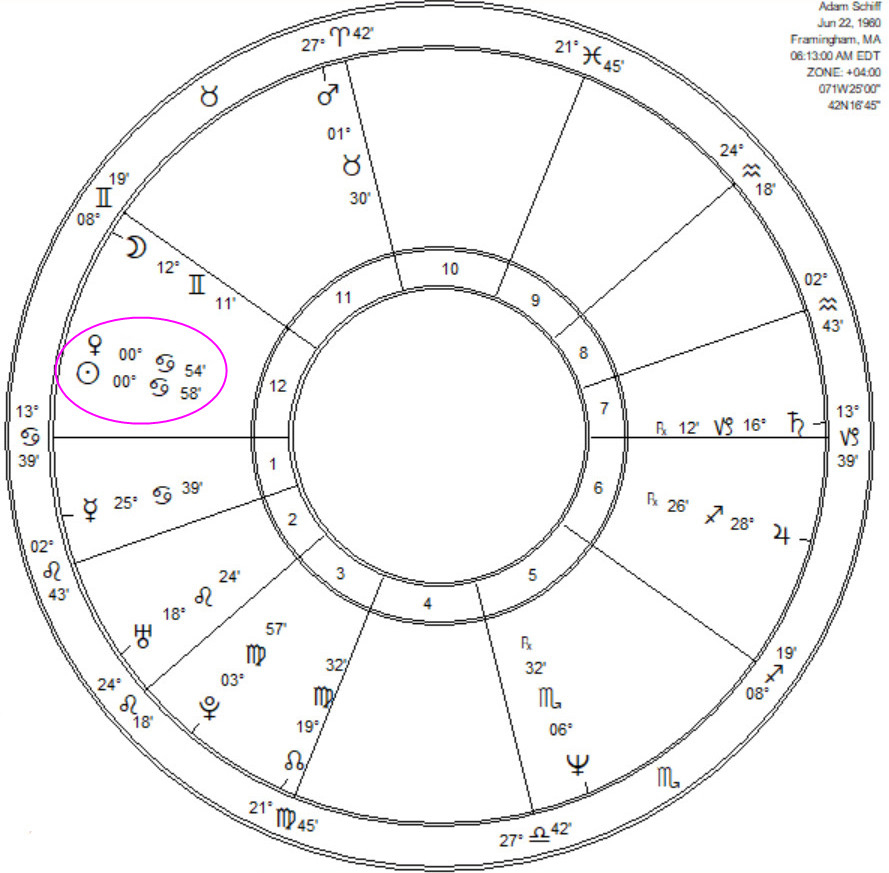 The symbol reveals Schiff’s ability to comprehend the broad scope of detail concerning the trial, as shown when he eloquently delivers the talking-points in the videos below. This will certainly assure him of a place in political history, especially concerning the unprecedented Trump administration.

The inquiry into the allegations that Trump manipulated Ukrainian president Volodymyr Zelensky, to force his assistance to smear Trump’s rival Joe Biden, took place between September and November 2019.  These events coincide with Schiff’s 2nd Saturn Return.

The articles of impeachment charged Trump with abuse of power and obstruction of Congress. On December 18, 2019, the House of Representatives voted to impeach the 45th President of the United States. The impeachment will forever be remembered as part of Trump’s presidential legacy.

(1) Cazimi is a conjunction of two or more planets with the Sun, within 17 minutes of arc. It superpowers the energies and meaning of the planets through being located within the core of the Sun. Planets in normal orb of a conjunct with the Sun are considerably weakened.

CANCER 2 A man suspended over a vast level place This is a symbol of man’s capacity for an illimitable overview of his experience in advance of his involvement in its details, and of the infinite ramification of possibilities he is able to uncover in the world he seeks to make his own. Implicit in the negative symbolism is the poise in act by which he escapes the bondage of any random compulsions, and a leisure in perspective which preserves his free choice. The keyword is CONTEMPLATION. When positive, the degree is an exceptional spread of comprehension and a continual self-orientation of understanding, and when negative, a flighty transcendence or an impatience with all immediate or down-to-earth considerations.

(4) An example of outrageous verbal abuse spoken by the world’s most powerful leader is the contents of the twitter feed by Donald J. Trump @realDonaldTrump – at 6:37 AM  on Jan 25, 2020: “Our case against lyin’, cheatin’, liddle’ Adam “Shifty” Schiff, Cryin’ Chuck Schumer, Nervous Nancy Pelosi, their leader, dumb as a rock AOC, & the entire Radical Left, Do Nothing Democrat Party, starts today at 10:00 A.M. on @FoxNews, @OANN or Fake News @CNN or Fake News MSDNC!”

One thought on “Truth on Trial – Adam Schiff, “You Might Think That’s Okay””