One mother and child among thousands, though some say close to a million Americans and RFK supporters, turned out along the tracks to pay their respects to the slain body of one of the United States’ most beloved presidential candidates of all time. The casket, propped up on chairs in the observation car, was made visible for bystanders awaiting their chance to pay their last respects. The train normally taking four hours to complete its journey, rolled poignantly along for eight hours from New York City to Arlington National Cemetery. It was a sad day and devastating times in US history, and the details of Kennedy’s rise and fall from political power is documented in Chris Matthews’ book, Bobby Kennedy – A Raging Spirit. 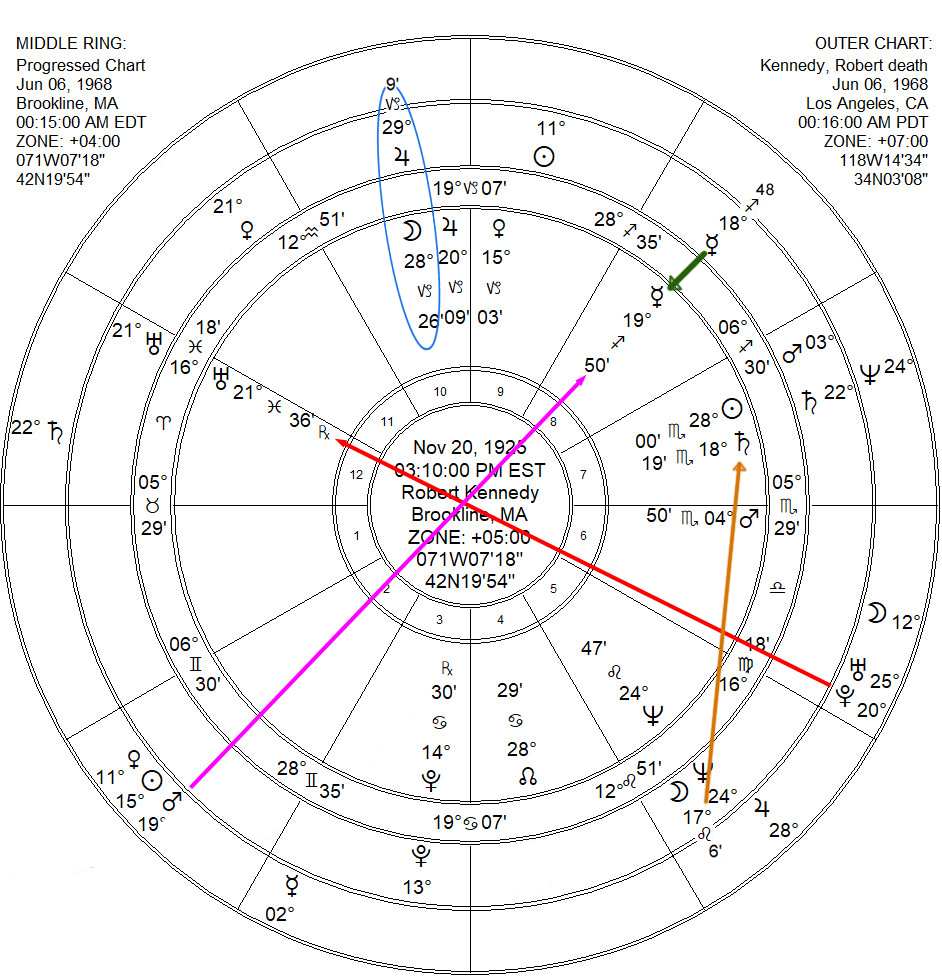 There is no need to show the myriad of possible corresponding astrological features of this or any other event for that matter, to prove the point of the immediate and intimate connection between the heavenly spheres and life on Earth.

The purpose of this blog is to confirm that on the most part, there are obvious Aspects related to events that show up inevitably when taking an honest and knowledgeable look into a horoscope. Astrologers have numerous ways of pointing out synchronicity, as it relates to life and the planets. Among them are those who advocate for traditional configurations as well as those made by Asteroids, Midpoints, Harmonics and more, all revealing the continuous symphony of astrological possibilities.

Here with the chart at hand of the assassination of Robert F. Kennedy, can be seen the obvious Major Aspects between the Transits and Progressions to his natal planetary positions. The Transits will be limited to Conjunctions and Oppositions within 1 + degrees of orb, and with Progressions, the five Major Aspects will be taken into account. By no means is this to be considered an exhaustive view, as stated above. It is the simple recognition of how eagerly illustrative the planets can be to the curious eye.

Jupiter in Progression is shown at the top of the chart circled in blue with RFK’s natal Moon. Jupiter just passed the exact Aspect to show that for a time, there was great popularity in the candidate’s outreach (Jupiter) to the general public (Moon). Jupiter’s positive attributes are the obvious indicators of the win in the primaries over his opponent Eugene McCarthy.

While his personal philosophy of justice and goodness is shown activated by the Progressed Mercury Conjunct natal Mercury in the 8th house of other people’s approval, the violent act with a gun shot to the head is obvious with the Transit Mars in Opposition to the Mercuries, both natal and Progressed. This personal attack, shown by the pink line across the chart, was a result of Shihan Sirhan’s utter dismay over Kennedy’s support for Israel during the 1967 Arab Israeli War.

Pluto coming to Transit Opposite natal Uranus, shown with the red line, is testimony of the long development of both the speculation of running for the presidency, and the behind-the-scenes 12th house creation of animosity that led ultimately to the assassination.

The stress of all the factors at the time is the common appearance of a Major Square Aspect from the Progressed Moon. In this case it is typical that it would be making this all too pressured Aspect to natal Saturn. Open opponents are shown in the 7th house and there it is in the sign of Scorpio, that rules death as well as living and healthy creativity. 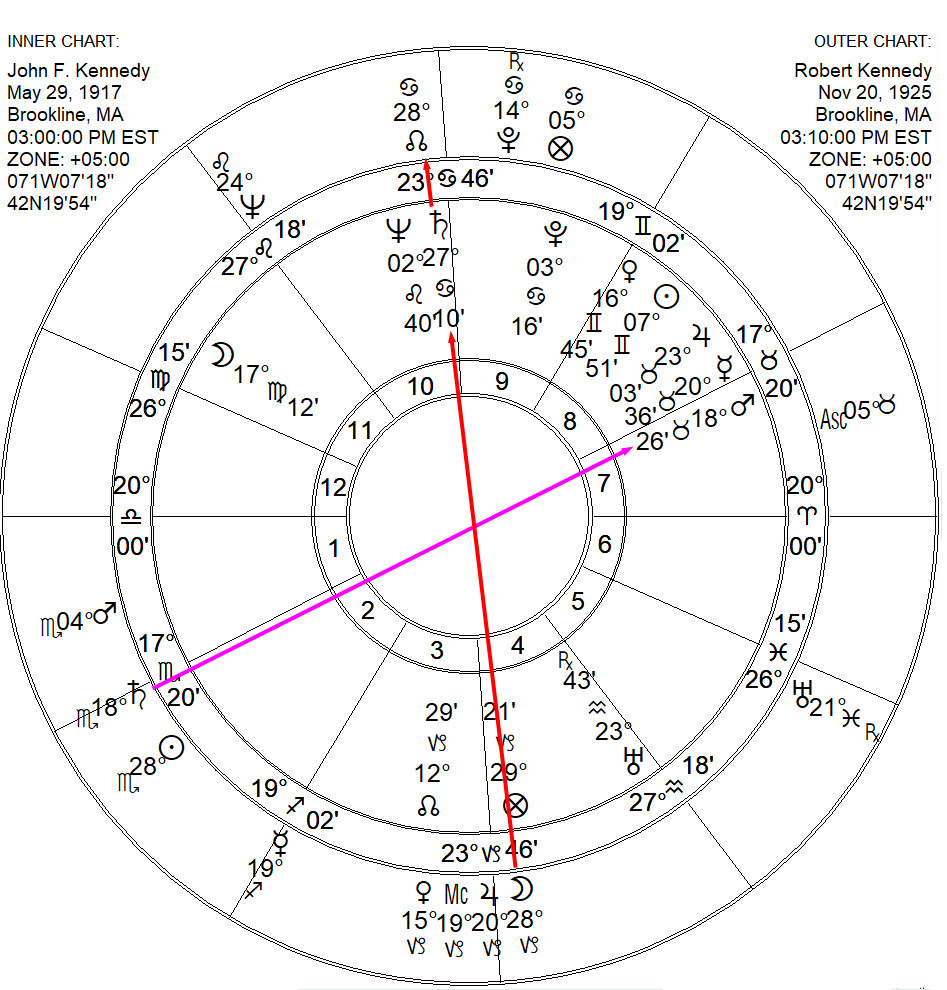 The brothers were held together through Opposition Aspects, both including the planet Saturn. It speaks of a sensitive appreciation of each other as well as a real and practical joint destiny to right the wrongs of a society corrupt and clandestine.

These are not easy planetary connections, but they are very close and powerful in the sense that they show the seriousness, and the unfortunate to-the-death dedication to the relationship. Oppositions between charts speak of the ties that magnetically pull the two entities together for the purpose of which the two may decide.

Bobby gave John perspective, since without Bobby’s planets in Opposition to some of John’s, he would have to have relied on only himself for balance as there are no natal Oppositions in JFK’s natal chart. This most likely is a factor in the bodily exposure he allowed on that fateful afternoon in Dallas, Texas.

They had a powerful and soulful connection with JFK’s Saturn on RFK’s north node. Its Conjunction to JFK’s midheaven, promises a profound influence through death as well as while living. The brothers remain a constant American reminder of what is good in life and what truly makes America great.