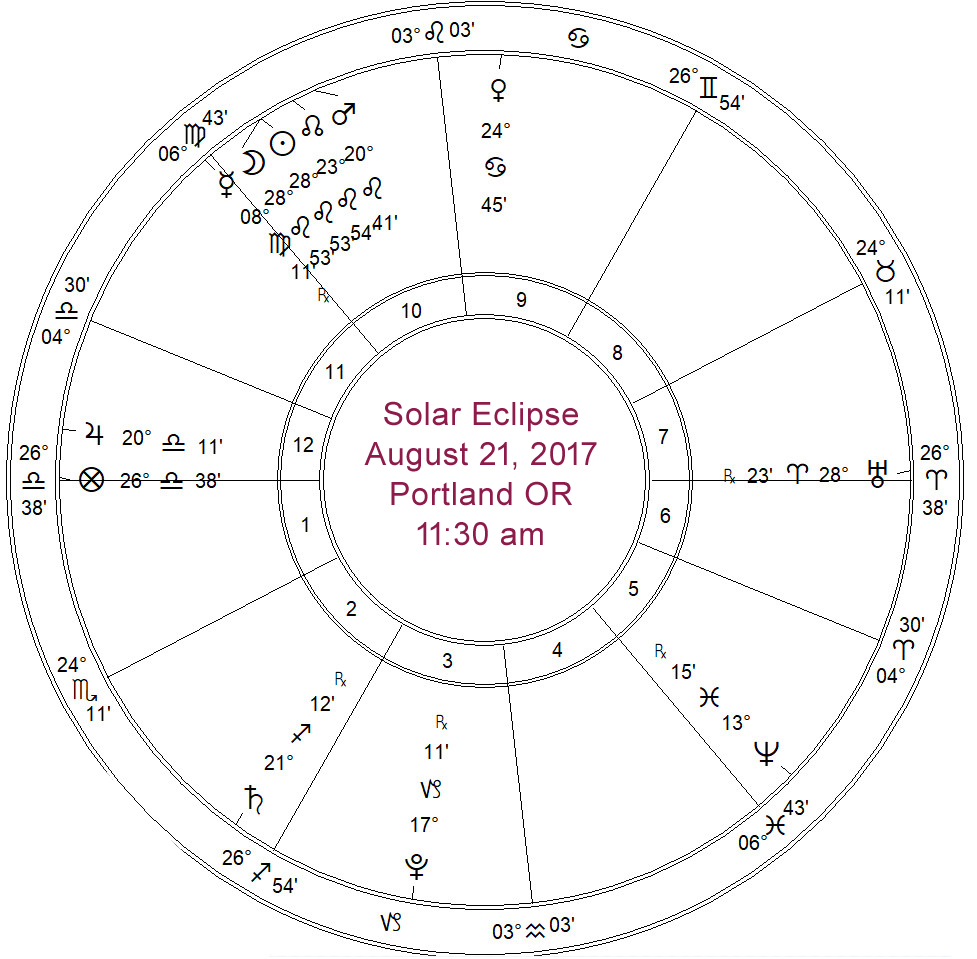 A solar eclipse is a Super-New Moon. It is a time to “plant seeds” for significant change in the daily pattern of our lives. Light is not the only influence the Sun and Moon have on living things. All heavenly bodies exude an electromagnetic field, which has its influence on other heavenly spheres and life in general. These invisible energies are activated in mysterious ways through interactions of the planets, the Sun and Moon, asteroids and other significant points represented symbolically in astrological charts.

Eclipses are strongest when near or opposite a planet in the horoscope. All other influences are general and are associated with the meaning of the houses where the eclipse falls.
An eclipse can indicate the end and rebirth of behavioral patterns hidden deep within the psyche. When drawing the substance of the unconscious into the sphere of the conscious mind, through meditation or breathwork, a natural catharsis can take place that clears outmoded content. Through courageous observation of personal issues, the need for transformation can be fulfilled. The theme of the crises to be cleared is determined by which houses the solar and lunar eclipses fall in your personal horoscope.

It is not an accident that the Sun and Moon are at the distances where when they are in line with the Earth that the diameter of their disks are the same size. This strategic alignment produces a powerful thrust of energy toward the Earth that motivates a comprehensive evolution of all matter. A solar eclipse occurs twice a year, along with a lunar eclipse either before or after. These are one of the most profound astronomical and astrological events that influence our lives, although there are many other significant celestial occurrences that promote great change.

The shadow of the moon travels the surface of the Earth and marks the countries and the people designated for reorientation. The current eclipse in the astrological sign of Leo represents the heart center and effects the way that we as individuals interact with others and where we express ourselves as unique beings separate from the collective. It is a time to acknowledge the shadows within that await the light of conscious day to be resolved through Love, as one of the features of spiritual enlightenment ruled by the sign Leo.

LEO 29 A mermaid This is a symbol of humanity’s insatiable appetite for experience on the side of psychological self-assurance, and of the nascent eagerness of the soul for a private and personal participation in every possible facet of self-fulfillment. There is an ineradicable purity of man’s make-up at core, and in consequence an ultimate repudiation of all the compromises which seem to be demanded in everyday relationships. The individual forever seeks and responds to the creative needs of life itself. The keyword is IMPORTUNITY. When positive, the degree is a completeness of quickening to inner instincts of the being and a real willingness to trust them, and when negative, a lack of discrimination and an awkward insensitivity.