The surrogate horoscope for the people of the United States: Donald Trump’s upcoming Progressions and Transits point the way. 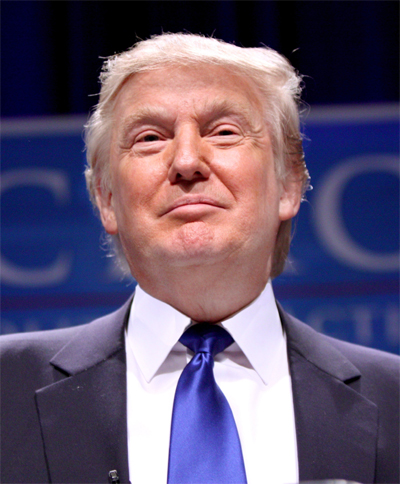 Trump’s Progressed Uranus is inching toward his natal Sun. This creates an uneasiness and continuously unpredictable state of affairs for himself and the nation for which he is the leader. Progressed Uranus is also in an exact Opposition to his natal Moon where Transit Saturn is poised to make a Stationary Direct Conjunction on August 26 2017. Transit Saturn will activate his natal Moon/Sun Opposition from the other end. This tense and intense standoff of planets dominates the present political landscape, and adds to the already ominous signs of change that the Total Solar Eclipse “promises” the nation and world. Progressed Uranus urges Trump to act on his own, independent of all outside influences, while Transit Saturn obligates him to be sensitive to the people’s wishes and be responsible for the welfare of those to whom he is in charge.

Because Saturn is disjunctive in nature, there may be a very strong desire to retreat, give up or resign because of so many complications facing him that he is not prepared to handle as an ordinary citizen. And what we see in the o 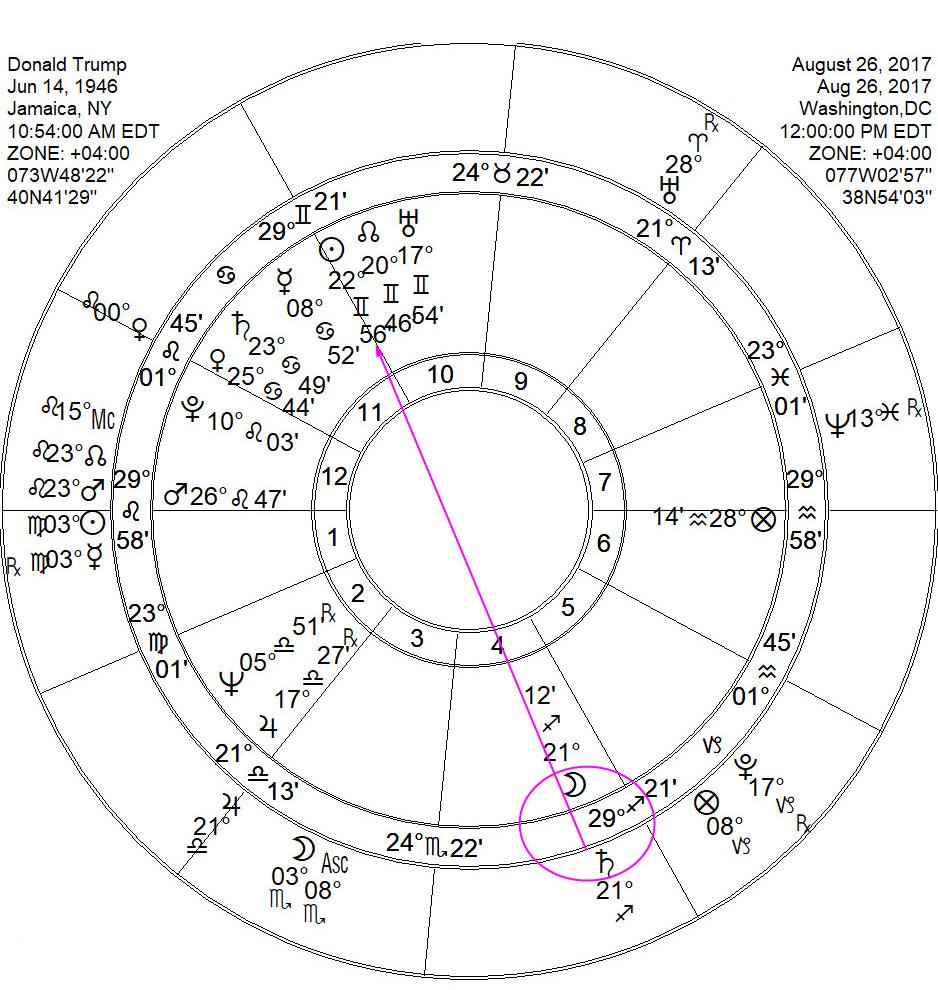 pen with Trump, is often very different than what goes on within the private world of his own psyche. The leaked phone call transcripts in the Washington Post on August 3, 2017 to the Mexican and Australian leaders revealed that what is said for public consumption is not necessarily the truth of what Trump actually thinks and feels.

Another interesting astrological harbinger of profound activity is seen with Trump’s Progressed Moon that in six to seven months will be Conjunct his natal Pluto. This Progression takes place in the 12th house with either disputed birth hour and it will inevitably bring out some truth from the depths. The 12th house is the domain wherein we hold our most secret thoughts and Pluto has charge of the deep recesses of the unconscious. It is the “closet” where we store our “skeletons.” There are no physical laws that can restrain the revelation of jangling bones from surfacing in the life of the President on this Aspect, and an entire nation will experience the revelations to come through its surrogate – the President of the United States.* Progressed Moon aspects last for their most intense periods about two months in duration. There are three periods of emphasis; when the Aspect is 1 degree from the natal placement it is activated with an obvious event or experience; when exact in degree and minutes; and when it leaves the Aspect and is 1 degree away. Significant events take place at these three times to confirm the Aspect is active, making this another method of rectification for those interested in working with a corrected birth chart. 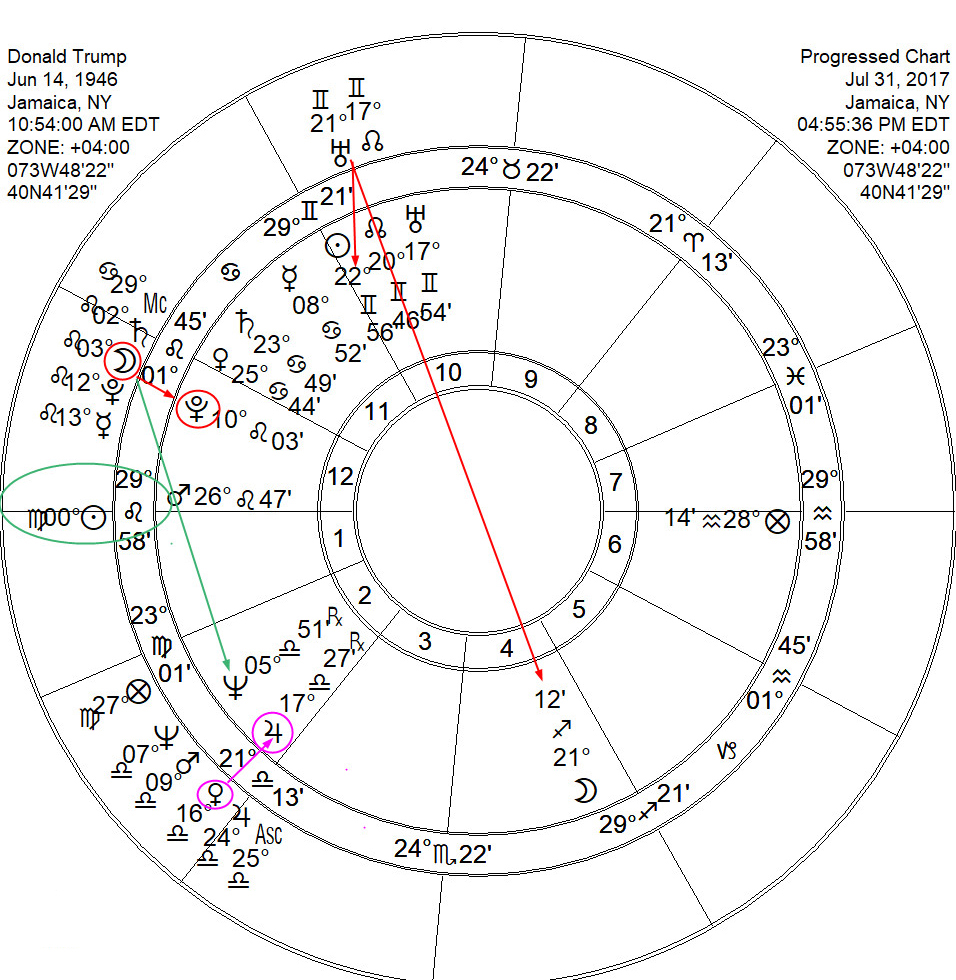 There will also be a Progression of Venus coming to Conjunct Trump’s natal Jupiter on June 5, 2018. One would think that the benefics being Conjunct would mean all good things for the native and the nation, however the Sabian Symbol degree tells another very surprising story, it is; Two men placed under arrest.

The threat of indictment is the cloud Trump speaks of hanging over his White House.

LIBRA 18 Two men placed under arrest This is a symbol of the maximum demand that may be made of any individual for self-consistency, and of the absoluteness of compulsions on human nature to provide a balance between inner and outer capacities. Implicit in the reversed symbolism is the importance of the self’s responsibility to its own essential characteristics, not as a limitation arising from the role it plays in life but as the necessity that the potentials of value in any given situation be brought to some point of immediate and effective function. The keyword is CONSEQUENCE. When positive, the degree is a heightened challenge to every special talent, and when negative, total inappropriateness of impulse and act.

Trump’s base and devoted followers consider the positive of the degree to be the dominant factor among his personal capacities and makeup, and the Democrats on the most part, and a growing number of Republicans in Congress view the negative of the degree to be the norm of Trump’s mode of operations. There are many instances were the “inappropriateness of impulse and act” is witnessed by those who are supportive of the president, and they clearly see these acts and minimize them as character idiosyncrasies of little concern.

Either way, the American people are sharing these coming Progressed and Transit Aspects with our president, who for better or worse will make his mark on the history of our country. Transit Pluto will be making Opposition Aspects with natal Saturn and Venus in the near and distant future, and both Progressed and Transit Jupiter are coming to a Square with natal Venus to signal more, much more to come . . . concerning the US economy as well as Trump’s personal financial operations. Squares can be exciting, but also revealing of troublesome issues to resolve.

*Update April 7, 2018: Correlating to the Progressed Moon during the early part of 2018, shows that the Stormy Daniels case against Donald Trump has legs. Also relevant as an important event is the determination that Trump is a Subject, but not a Target of the Special Counsel’s Investigation into Russia’s meddling in the 2016 US elections. During this important Progression, Trump called to congratulate Vladimir Putin on his winning the bogus presidential elections in Russia. It is significant to note that both Trump and Putin share the 18th degree of Libra, Two men placed under arrest which is the degree where Trump’s Venus has begun its Progression Conjunct his Natal Jupiter, and where Putin’s Saturn shares that ominous point.