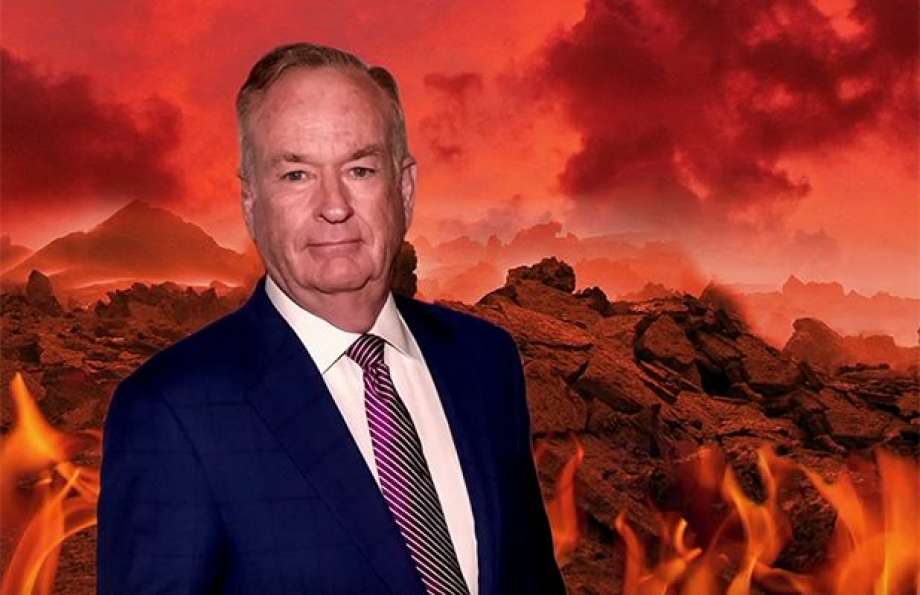 The recent self-induced calamity in the life of Bill O’Reilly is a fall of catastrophic proportions and an extremely embarrassing one in terms of his lost footing as a television host on Fox News Channel. He is also an author, journalist, syndicated columnist, and political commentator with leanings to the far Right. Throughout his career there has been controversy over his racist remarks on the air as well as allegations of sexual harassment behind the scenes. His untoward behavior with woman has risen from rumor to public exposure. The result is satisfaction given to self-respecting women and supporters of fairness and respect in the workplace. There are at least five women who have received in total 13 million dollars to be appeased and to keep quiet about their uncomfortable ordeals and lost opportunities because of his misuse of power.

In today’s media transparency it is almost impossible to shield oneself from reaping the justified backlash coming from unorthodox acts even if you throw big money at people. And why is this one not getting away with his backstage antics? Here in a brief analysis of O’Reilly’s Natal chart with Transits and Progressions, we’ll track the development of a conscience now needing to repent at best, and at worst continue his uninhibited, disrespectful advances toward random women, albeit now in the shadows of life outside Fox News. 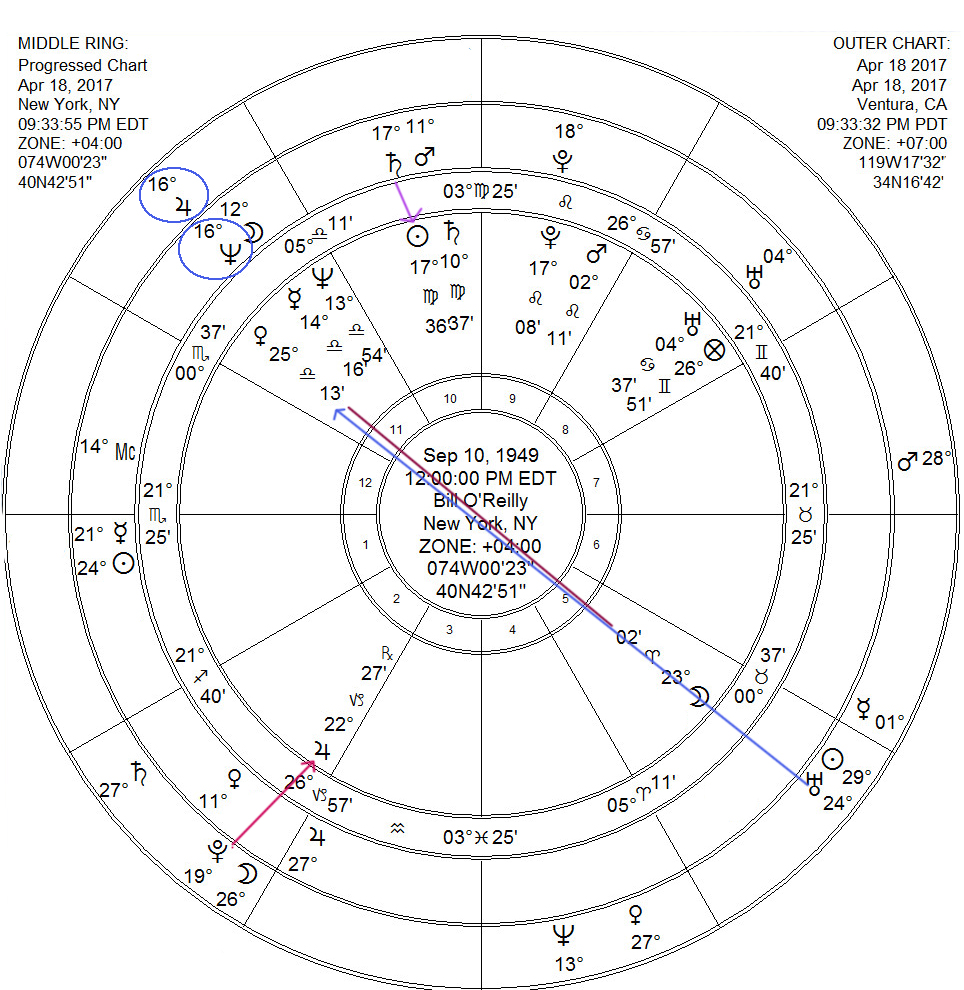 Being born with Saturn Conjunct the Sun can be challenging and sometimes painful, but it also can indicate a very focused and purposeful life. The higher road takes you to prominence and personal responsibility, which is true in O’Reilly’s case. But one can fall from the heights if the higher way is not chosen because of vulnerability to the id. It is Saturn’s task to create awareness through self-reflection or by social pressures. The planet’s Transits and Progressions open the door for acknowledging and correcting failures brought to light, and the process is accomplished through the function of good conscience. Saturn is in fact the Solar System’s counterpart and indicator of personal growth. Bill O’Reilly is in the middle of some very serious Transits and Progressions, and the planetary pair of Saturn and Jupiter are major players, as well as aspects with the Significant planets Uranus, Neptune and Pluto foretelling of big change.

At this time, Progressed Saturn is only a slight 13 minutes passed exact Conjunction of O’Reilly’s Natal Sun. This is conscience or Karma coming home to roost, and the aspect can be seen by the short red line at the top of the chart leading from Progressed Saturn in the middle ring to the Natal Sun in 17Virgo36.

There are no Squares or Oppositions to the Sun in this chart to suggest that the soul will take the hint and transform its unacceptable behavior. Most likely the discomfort of the Saturn Transit will last the length of the aspect and if not curbed in other ways and by outside forces, the tendency will be to take the charges lightly, leading to a continuation of the career as a writer.

Transit Jupiter in the outer ring shows a temporary Conjunction with O’Reilly’s Neptune in the sign of balance in relationships. A Neptunian desire to cloud the reason with alcohol and/or drugs may be considered at this time. But the policeman characteristics of Jupiter may very well arrest Neptune’s tendency to deviate from normal boundaries of respect when in the company of women and people of color. In other words, this may be the perfect time and opportunity to curb his perpetual problems and extreme points of view by getting professional advice.

Transit Uranus Opposes Natal Venus which signals the sudden and unexpected downfall at the hands of a few good woman. And if the time of birth is close to noon, the moon Opposite Venus may be the Natal “tell” of potentially disruptive interactions with the opposite sex.

Finally, a look at the powerful Station of Transit Pluto Conjunct Natal Jupiter in the degree of Two awards for bravery in war.  This Retrograde Station of Pluto, shown at the bottom left of the chart, is exact on April 21 – a mere one day after the announcement of O’Reilly’s dismissal from Fox News Channel. Apparently, The awards in this case are going to the women who have stood up to this traumatizing and demeaning episode in their lives.

Pluto brings out the truth in circumstances, and a transformation of consciousness is often part of the opportunity. And it is not only for the perpetrator in this instance, but it is a call to transformation of other victimizers worldwide, thanks to the public nature of this scandal that brought justice in the end. The fact that O’Reilly walked away with an additional $25 million is his reward, not so much for a brave and righteous attitude in the situation however. Indeed the negative of the Sabian Symbol is: strutting self-exploitation. There is a record of this type of behavior recorded in his news broadcast through the years, as well as through testimony of those who recently came forward to receive their well-deserved awards for bravery.