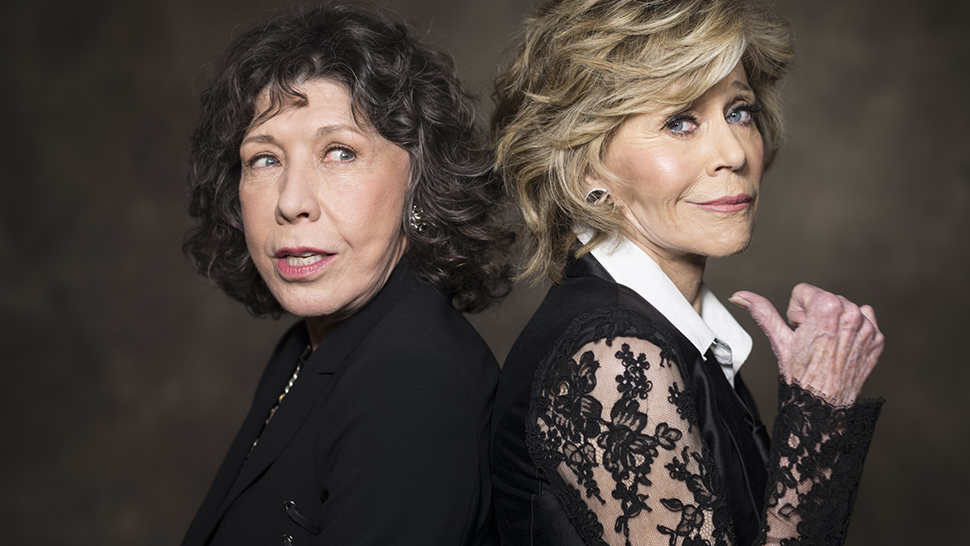 Actresses Jane Fonda and Lily Tomlin are revolutionizing the paradigm of longtime acting. Their successful Netflix series, Grace and Frankie, sends a message to all those who are 70 + years, that there is life after “old age” and plenty of it. A delightful banter is what keeps the show interesting for best friend buddies who were previously at odds in their way of life and perspective. Now forced to live together in their mutually owned beach house, after the husbands have come out and proclaimed their gay intent to marry, they are co-dependent and loving it.

Jane was fascinated by Lily years ago and offered a part to her in the comedy Nine to Five. The concept of men verses women in the work place was a hit then, and the longtime friendship produced another great premise and example, in Grace and Frankie, of the power of women to survive in a man’s harsh world.

Now for a look at the overall comparison of two special planetary groups in partnership analysis. They are Mars, Venus, Mercury and Sun, Moon, Ascendant.

The connection  between planets in the charts of the two ladies is striking. There are few compatibilities in terms of same planet to planet comparison in the category of Efficiency; Mars, Venus and Mercury. None of the three indicators are in compatible elements. This reveals their ability to play on each other’s vast differences. 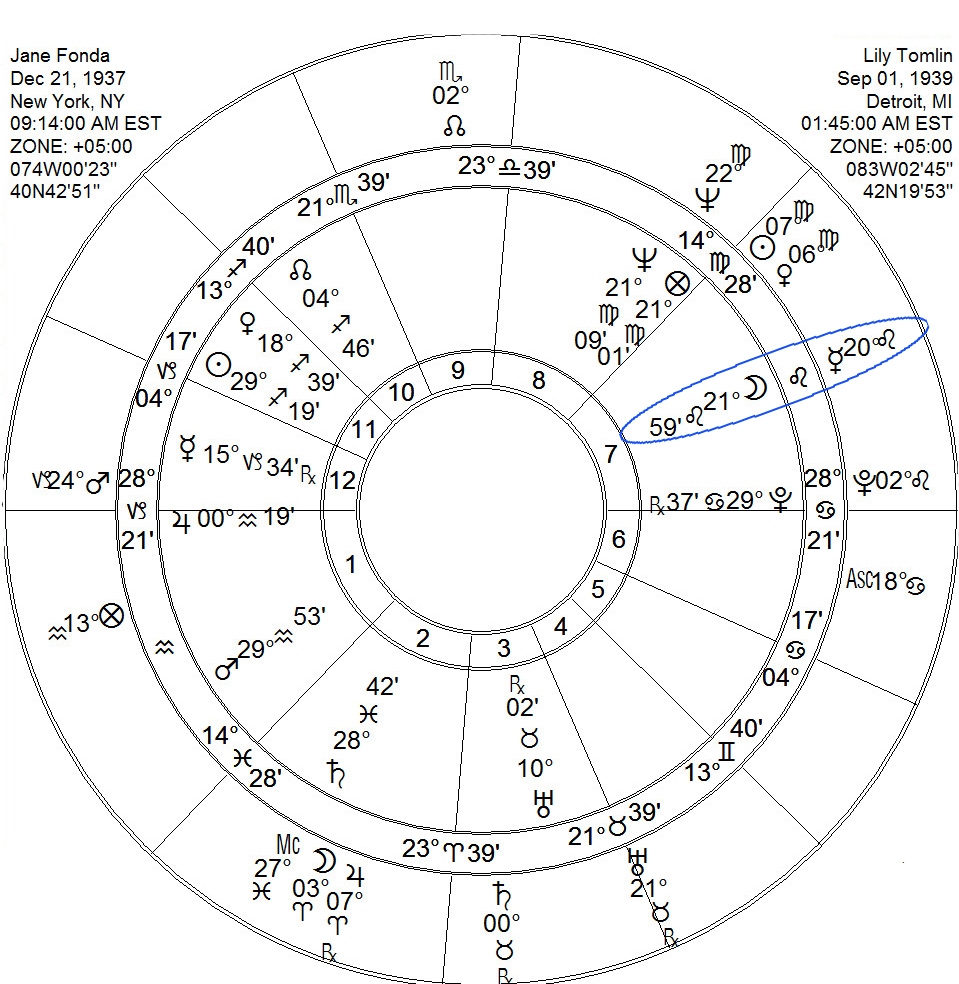 The ideal situation is when there are two harmonies and one not between the three factors in each category. Taking the Sun, Moon and Ascendant, the ladies’ Moons and Ascendants are compatible in Triplicity, and that points to what is called One Point Inharmony of Suns in the category of Vitality. A focus of disharmonious Suns equals incompatible Wills. They may differ greatly in temperament and perspective on life, but it is their “willingness to work in harness”* that facilitates the ability to manifest a message greater than each could accomplish alone. The combo of the two idiosyncratic personalities is the crux of what makes Grace and Frankie so unique in the world of girlfriend relationships. This astrological contrast and conflict of Wills fits so conveniently into their characters’ portrayal of antagonistic screen personalities.

The planetary aspect interaction of the two charts shows that Lily’s Mercury is within one degree of Conjunction with Jane’s Moon. When there is a Conjunction or Opposition of planets between charts within one degree of arc, there is a real bonding and sharing of potentials. The quick and hilarious mind (Mercury) of Lily Tomlin buttresses harmoniously Fonda’s intense (Moon) acting style. 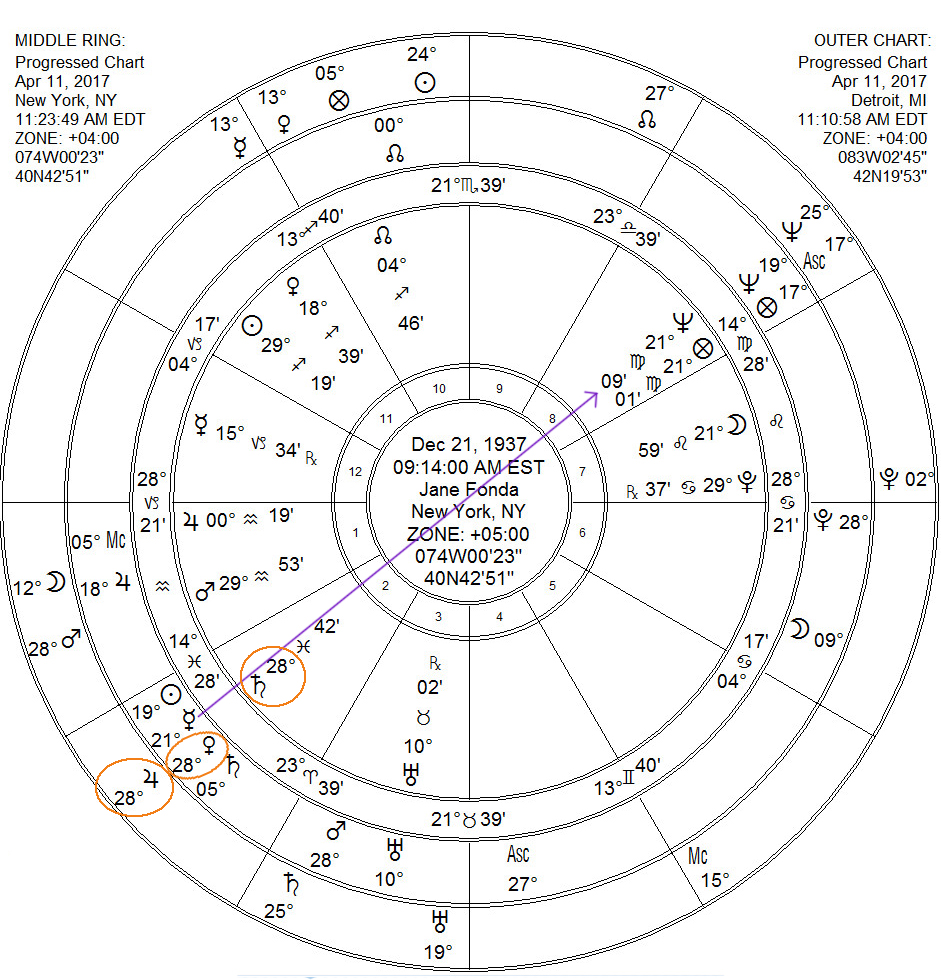 The Tri-wheel dramatically shows, with an update of Progressed factors, the astrological reason for the present and mutual activity in the lives of the two actresses. The middle ring shows Fonda’s Natal Saturn being pleasantly activated by her own Progressed Venus. And Tomlin’s Progressed Jupiter joins the configuration to add expanded dimension and enthusiasm to their unique performing partnership.

Stimulated Saturn in Fonda’s Natal chart reveals, that the rewards (Venus) of hard work and maturity (Saturn) is so much a part of the fascinating possibilities of her late-life adventures.