The United States birth chart acts as the template for the potentials and destiny of its people. The chart of the president of the nation also maps its potentials through forecasting events, policies and their outcomes through Transits and Progressions to the president’s natal planetary positions. President Trump is the present surrogate leader of the country, and therefore lends his natal chart to the populous. The chart shown here has Trump’s natal planets in the center wheel, his progressions in the middle wheel and the US natal configurations in the outer wheel.  It is important to simultaneously research each individual chart; Trump’s Natal and the US Natal, for Transit and Progressed aspects and eclipses. Although these charts can be examined separately, multiple levels of interacting configurations often reveal nuances otherwise difficult to pinpoint from only one chart on its own. A cross-comparison of charts is one of the subjects of this post. (For an examination of the presidential inaugural horoscope see post: US Inaugural Chart January 20, 2017.) 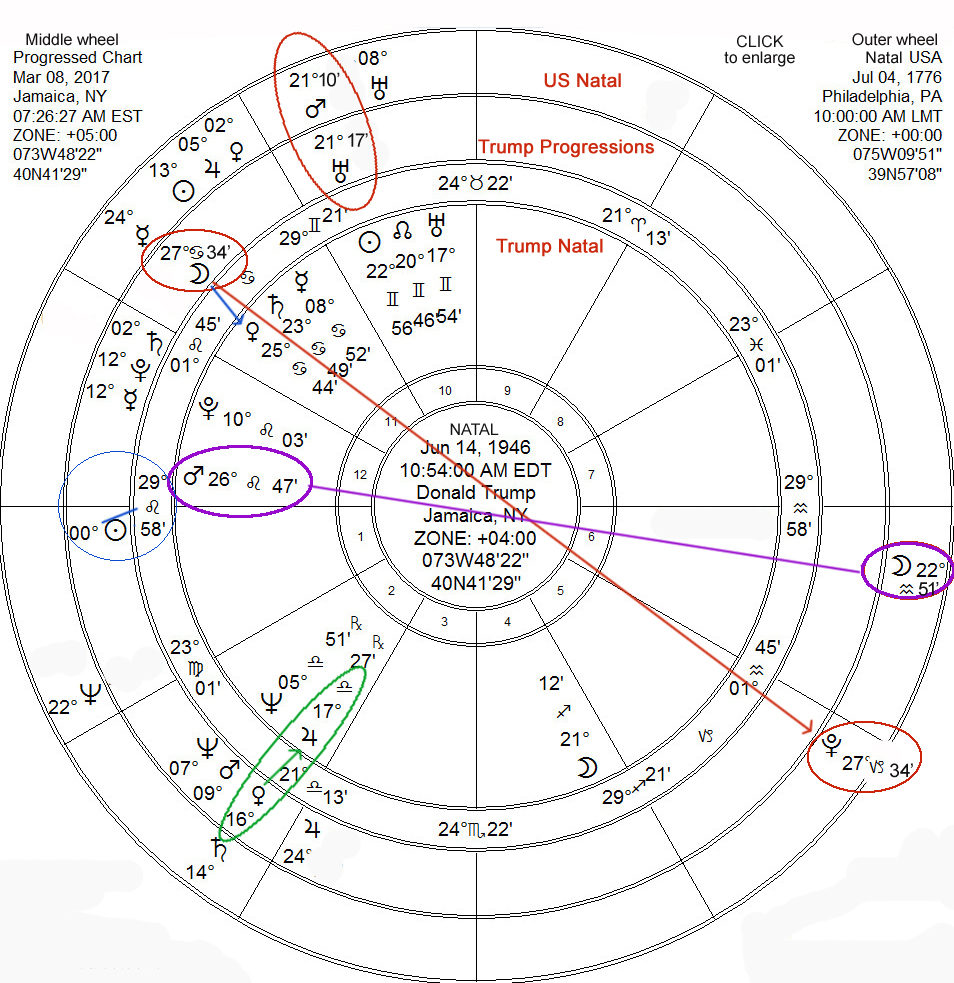 There are planetary Aspects currently active between the two charts mentioned above. The very intense and tense situation between US political parties is laid bare by these very significant Aspects. Shown with a red line from the middle wheel to the outer:  Trump’s Progressed Moon at 26 Cancer 34, that will make an exact Opposition aspect to the US Natal Pluto on or about March 8, 2017. However, Aspects are not only in effect at the time they are exact, they are also in effect in advance, and for a period of time after. In the case of a Progressed Moon, one can track the events approximately one month before and after the exact Aspect. This means that as of February 8, or thereabouts, some significant issue/s can be paired with this Progression of short duration.

Below is a list of the Executive Orders that were signed at the beginning of the Moon Progression that could be significant and in the news during or around the exact Aspect:

Below is a list of a few of the events surfacing around February 8 concerning Flynn’s connection with the Russian Ambassador to the US:

The connection of Trump with Putin and his aids, officials and advisers allegedly in contact with Russia during and after the Trump campaign gives rise to the notion that this particular series of events could actually be the one to watch in regards to the important Trump Progressed Moon Opposite the US chart’s Natal Pluto. Perhaps the gathering interest in Congress to probe the details of this concern will be brought to a head at the exact aspect around March 8 or 9.

Pluto’s keyword in Progressions is PROBITY, the definition being, “The quality of having strong moral principles; honesty, decency and integrity.” Many Democrats, and some Republicans believe the push-back to the administration’s policies is caused by a question of such qualities of character to be lacking in the President’s demeanor and of those in positions of influence around him. In time the true nature of the administration’s members will be revealed.

ADDITIONAL ASPECTS and their definitions:

Circled in red at the top of the chart is Uranus in Trump’s progressions making a Conjunction with the US Natal Mars. This is perhaps one of the strongest indications for the Excitation (Mars’ keyword) induced by Trump’s rhetoric for the people of the US who believe he will be the answer to their needs. It is also the aspect that creates antagonism with those who are opposed to his policies. Mars points to initiative and excitation, but when frustrated it calls out anger and resistance.

Trump’s consistent erratic statements and actions correspond to the very longtime Progressed Uranus Conjunct Natal Sun. Trump’s Natal Uranus is the Leading Planet in his Temperament Type, showing him to be eccentric and experimentative in nature. This is also an indication of genius, although in this case not a very obvious manifestation. It most likely shows him a maverick and an iconoclast, rather than the heroic individual Uranus more pleasantly exemplifies.

Shown in red circles and lines is Progressed Moon Opposite US Natal Pluto. As mentioned earlier it corresponds to the public’s concern over possible collusion with Russia during the Trump campaign period. Exaggerations of unlawful events perpetrated by the democratic candidate could easily have been instigated by underhanded means for which Pluto is notorious.

Circled in purple and connected with a line is the Solar Eclipse of August 21, 2017 (not shown in the chart), coming to Conjunct Trump’s Natal Mars as it Opposes the US Natal Moon. The eclipse is at 28 Leo 53, and within the allowable orb of 5 degrees. Trump’s Natal Mars is Opposed by the US Natal Moon. The public (Moon) will always be scrutinizing Trump’s actions (Mars). The Eclipse will most definitely drop something from the political agenda, if not being a threat to the presidency itself.

Circled in green in the 2nd house is Trump’s Progressed Venus coming to Conjunct his Natal Jupiter in 2019-20. This indicates that we may see a revelation in terms of Trump’s financials at that time. There is often good fortune attached to indications involving the benefics in Progression. With the US Natal Saturn always close by Trump’s Jupiter, the situation may always remain a bit stressed. The pressure to reveal his tax returns may always cloud the dynamic between the populous and Trump in regards to his personal income and possible business holdings with Russian officials or private nationals.