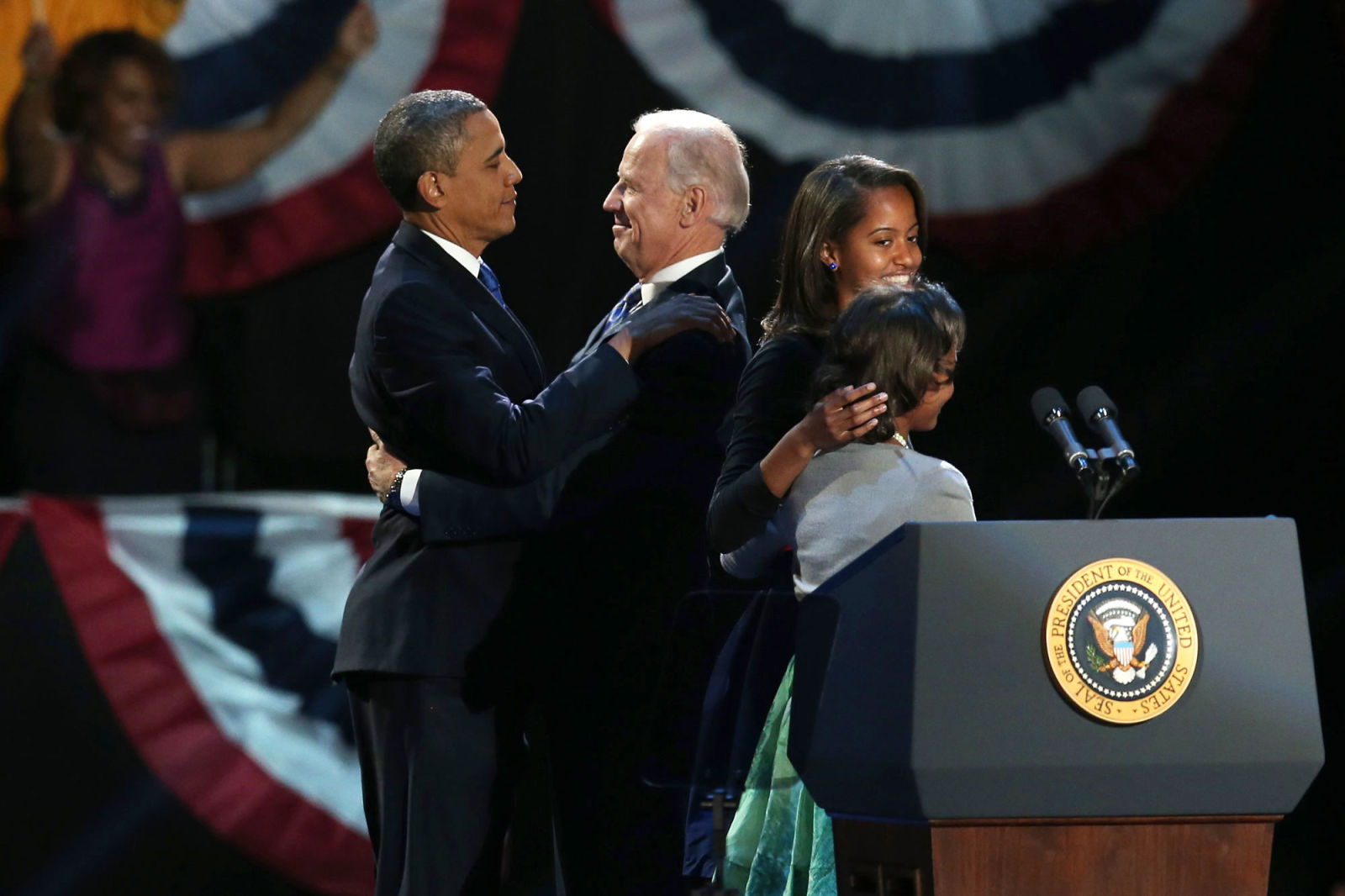 Why are Barak Obama and Joe Biden attracted to one another? It’s chemistry! And it can be seen with a comparison of their horoscopes. When planets in one horoscope makes contact aspects with the planets in another chart, it facilitates relationship potentials. This does not guarantee that the relationship will be long-lasting or even that there will be a relationship at all. It simply means that if there is an interest in developing connections between two people, the planet’s characteristics and meanings become indicative of the interaction that will develop. 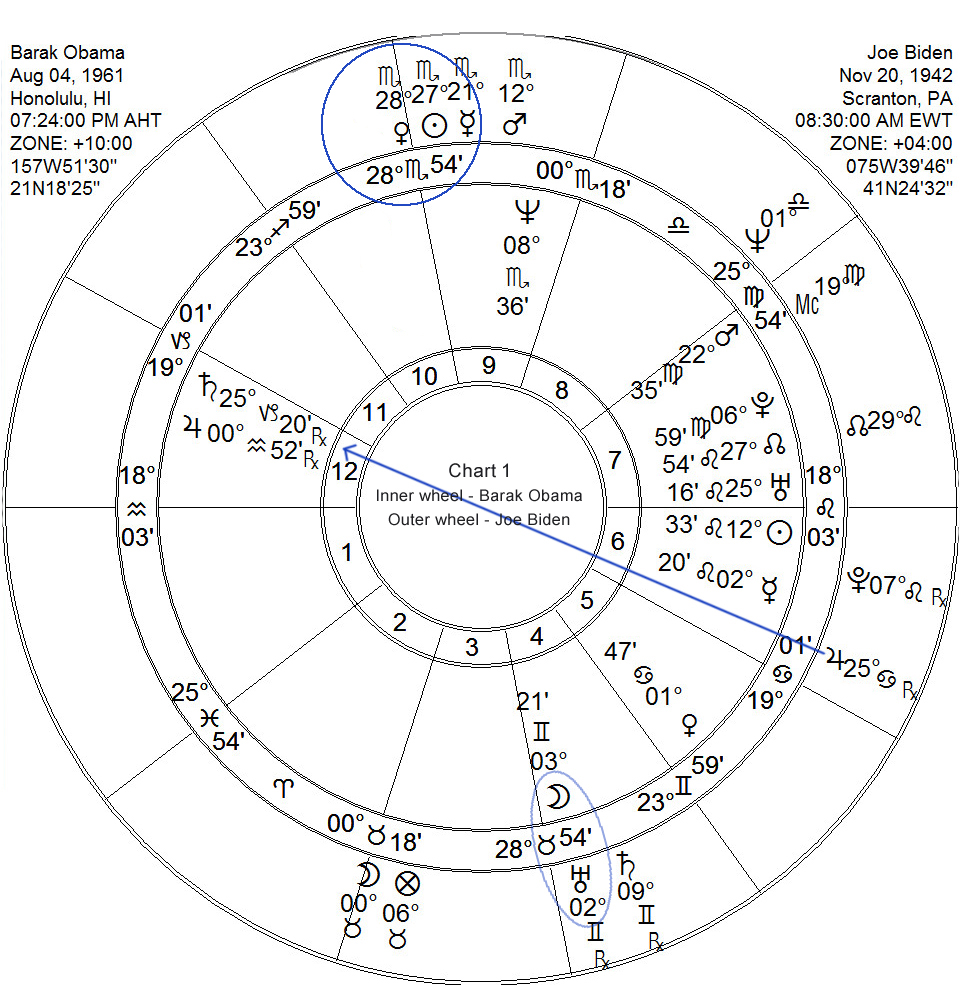 In Chart 1, Biden’s Uranus is making a Conjunction aspect with Obama’s Moon. This helps Obama absorb, through his feelings, the unique and intelligent contribution of Biden’s advice. Biden’s Jupiter makes an Opposition to Obama’s Saturn, which receives the older man’s direction in a mature and sensitive manner. It is rather obvious by these aspects that Obama depended quite heavily on his second-in-command, for information and guidance. And Biden experienced much gratification in being Obama’s right-hand-man, shown by the personally gratifying presence of Jupiter stimulated and being stimulated by an Opposition between charts.

In the reverse, showing Joe Biden in the inner whee 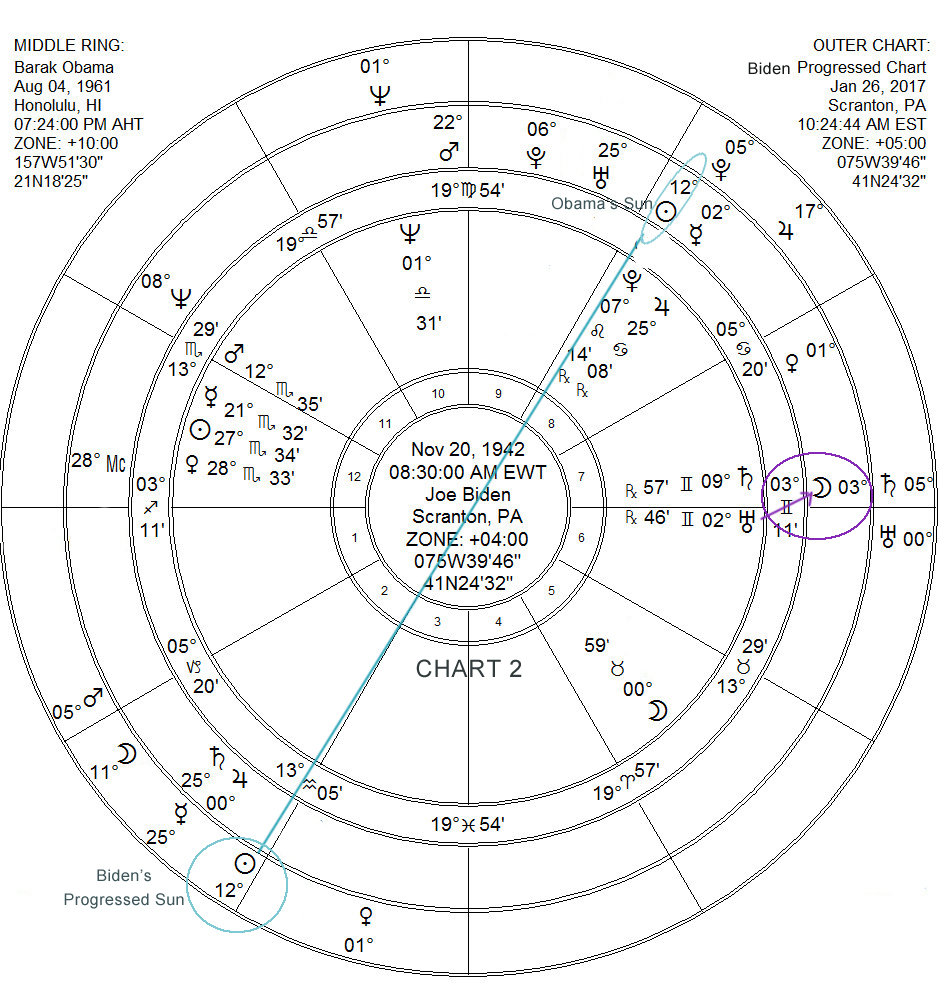 l and Obama’s chart in the outer of Chart 2, we see that Obama’s Moon lies directly on Biden’s 7th house cusp. Here is a delightful indication of an emotionally reciprocal appreciation for the partnership, as the 7th house is the place of partnership. Biden’s Uranus Conjunct his own Descendant shows that the native draws unique and unusual partners. Obama’s Moon, meaning his feelings, are inspired by Biden’s special brand of genius – represented by Uranus.

The blue lines in chart 2 show a very unique configuration. Biden’s Progressed Sun has come to make an Opposition to Obama’s Natal Sun. Often it is seen that an active relationship occurs when an individual’s Progressed planet moves to make an aspect with another individual’s Natal planet. It is especially powerful when it is the same planet and when it is the Opposition aspect. The Conjunction aspect is strong when people are together, but the Opposition aspect 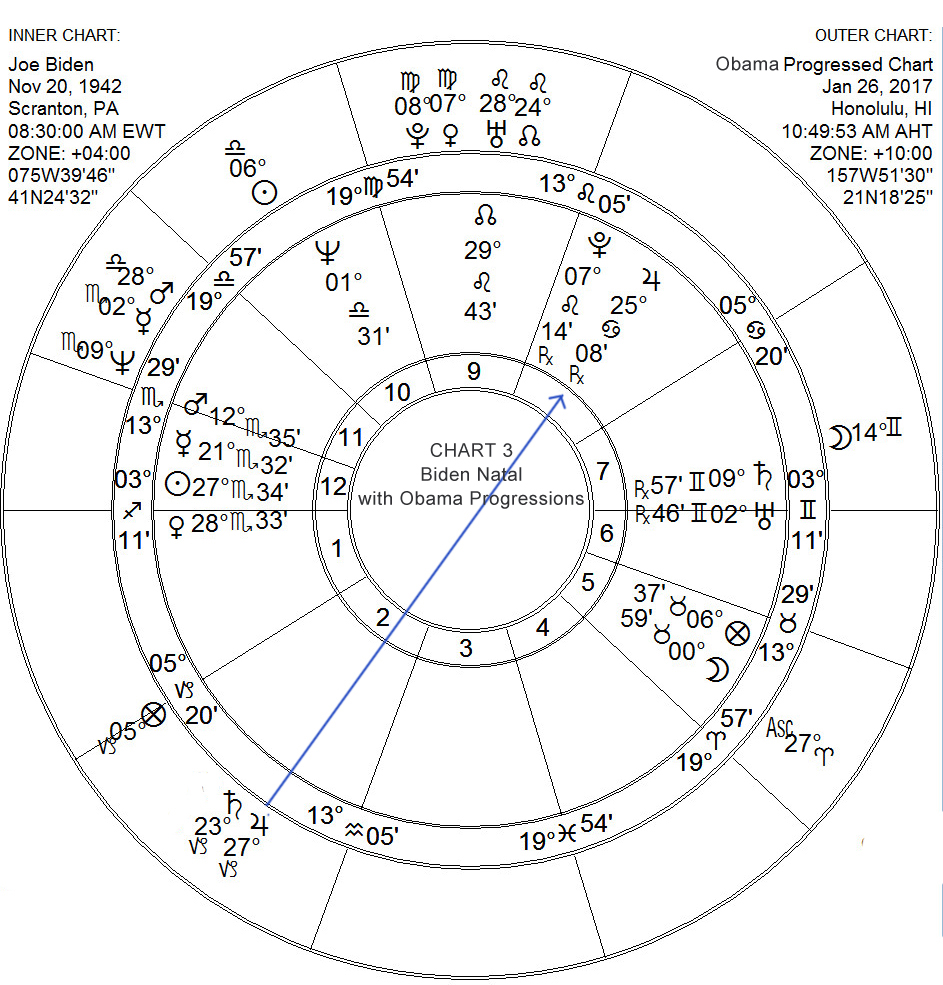 actually has the energy to draw and keep together the dynamic between the two parties involved.

Here in chart 3 and also in the ephemeris graph, we see that Obama’s Progressed Jupiter is slowing down to make a slightly wide orb Opposition to Joe Biden’s Natal Jupiter. Here is the Progression that has been in effect over the years they spent together in the White House. A mutual planet is at play again between these individuals, and again it is the Opposition aspect that attracts and holds the relationship in balance. And this is great testimony to the Jupiterian good fortune bestowed upon them by the mysterious maneuvers revealed through the dynamic progressions. It is a overt give-and-take, sharing of potentials, made possible through the outreaching Greater Benefic Jupiter.

The ephemeris graph shows Jupiter Stationary Direct in correspondence to Barak Obama’s reelection year at the age of 52. Again true-to-form, Jupiter’s good fortune presented the pair with a second term of office as President and Vice President of the United States of America. Stations in Progression are always a sign of great adjustment and change. In this case it was not so much change, but a great boost in morale for the team of two. This gave Obama the confidence that he had the support of the nation behind 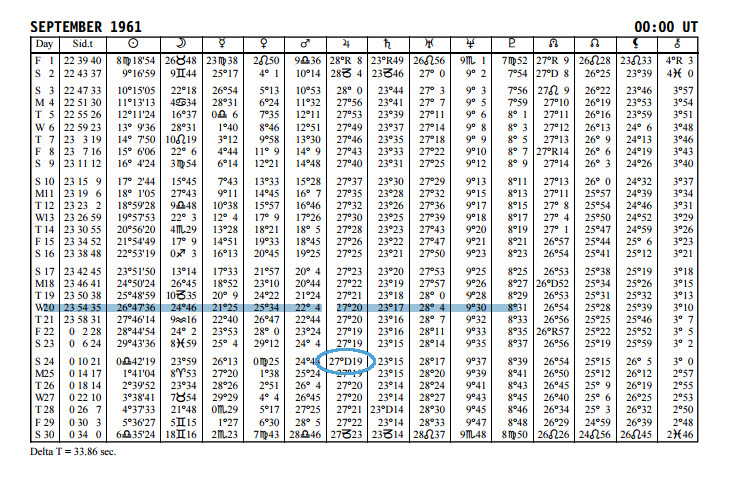 him, and he could now go forward with assurance, synchronous with Jupiter’s going Direct, to continue bringing benefits when and where he could, to those to whom he was in service – the American people.