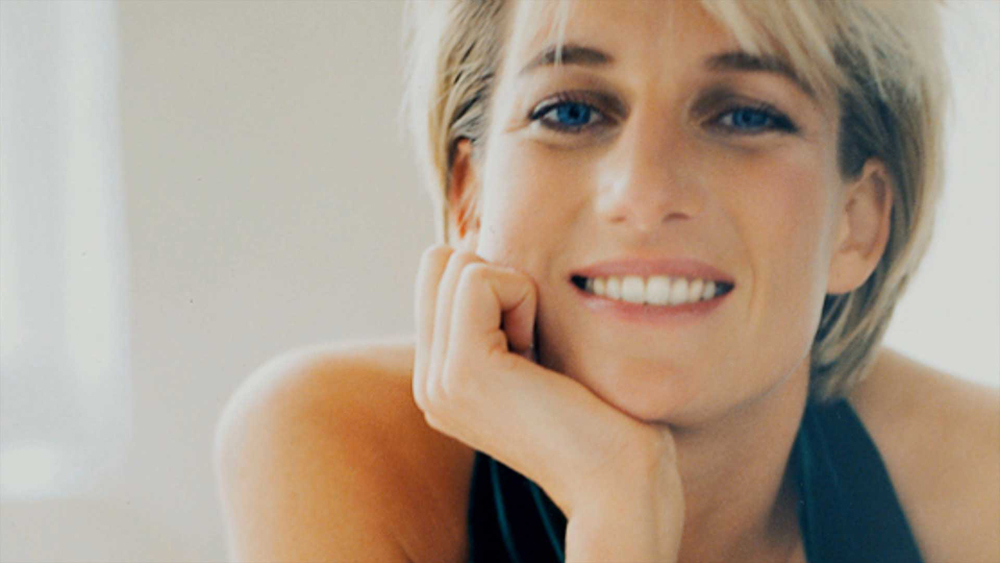 Planetary configurations in the birth chart of the Princess of Wales confirm the spell she had, and still has, on all people everywhere, no matter their gender, race or circumstances in life. The charts of other individuals born at the same time, may share symbolically, the potentials that only she in her advantageous circumstance could bring to fruition in a lifetime. 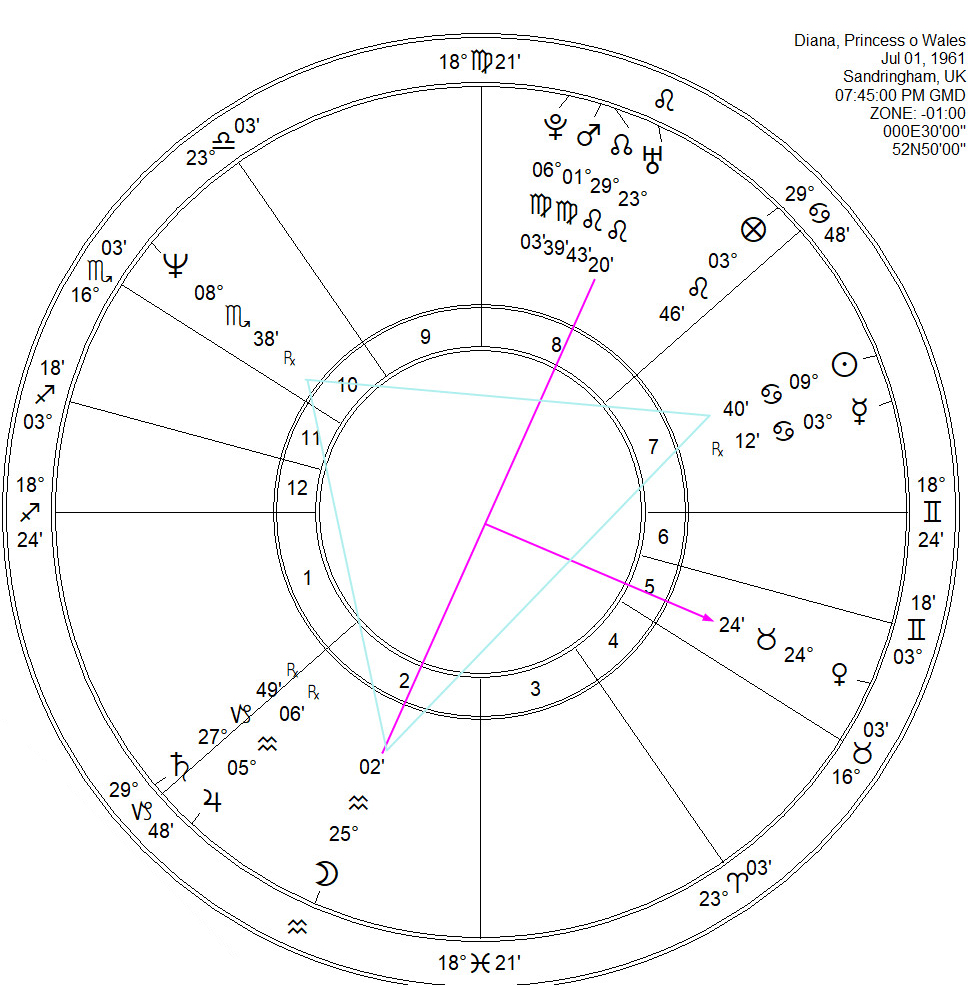 Diana’s Moon/Uranus Opposition in the Leo and Aquarius polarity, shows that she has a Fixed Natural Disposition. This means that she is interested in the meaning of life and its ideals and principles – encouraging ethics to take precedence over self-gratification, or the fulfillment of others’ needs above one’s own. Preoccupation of self is the mark of a Cardinal Disposition, and the dedication to the welfare of others is a Mutable Disposition’s characteristic.

In her emotional battles with the royal family, it has been shown that she made her most important life decisions with the thought of how they would play out in the Fixed, abstract realm of right and wrong. And the challenge of the ubiquitous presence of her husband’s lover, forced her to take a traditional and moral attitude in regards to the institution of marriage. It was neither for her own nor her husband’s benefit that she had a mind to satisfy, but instead, it was her adherence to principle that moved her finally to acquiesce to separation and ultimately divorce. With the Sun and Mercury in Cancer in her 7th house, the Princess’ drive in life was focused toward finding a mate, sharing experience, and to hold family and relationships sacred. This was sadly, never to be fulfilled.

The Princess’ Temperament Type is a bit difficult to define, because the spread of the planets does not fit ideally into any of the seven typical patterns. At first view, it seems possibly that the pattern is a Splash, with the planets spread evenly around the wheel. However, there are six empty houses where there should only be three for the ideal of this typing. The possible See-Saw is ruled out because of the lack of a Core Opposition, and neither of the two segments is formed with a delimiting Opposition. A Splay may seem appropriate, but there are four instead of three segments of planets that normally signify the Type.

In the final analysis, the Splay Temperament is chosen over the other six possibilities, since with some effort on the native’s part, the Moon can be pulled into a Grand Trine with Neptune and the Sun. The Splay is based on the triangulation of the chart, and the Moon’s normal orb is 12.30 degrees and in the Princess’ case, it is a mere 30 minutes of arc over accepted orb. The validity of this choice of pattern is seen in the native’s avoidance of mediocrity and commonplace lifestyle. The Splay, with its pyramiding ease of self-making, motivates a native to blossom into a personage that can have a very real impact on the lives of others who witness their special brand of genius. The Princess was indeed a personage whose stature soared above the norm, giving confirmation of the benefit of the Splay’s Grand Trine potentials. Given time to progressively develop into a model of goodness and grace, the Grand Trine inevitably led the Princess to worldwide attention and homage.

But it is not the Temperament Type alone, nor any of the other myriad of planetary characteristics that made Diana into the overwhelmingly beloved personality. As inferred above, there is always the factor of heredity and environment to take into account and to integrate into a thorough reading of any horoscope, whether it be a celebrated individual or of an average citizen from any walk of life. In Diana’s case, it was her juxtaposition to power that gave her an advantage to influence millions. And this might not have been accomplished, had she not married a Prince, the heir to the throne of England. The Princess’ potentials were magnified by her own pedigree as well, but the marriage set those potentials into motion, even more so after the unfortunate divorce when she was literally on her own. This gave her the sympathy of the masses, seen astrologically in the well-occupied 8th house of other people’s approval.

Diana had a Sharp Destiny, which is testimony to the rigid limitations and controversies with which she endured throughout her too short life. But a Sharp Destiny often propels an individual beyond normal achievement, even when at the same time there are forces at play challenging the native at every turn. A Sharp Destiny is defined by the stress of a Conjunction, Square or Opposition of the Planetary Pair of Motivation; Jupiter and Saturn. In the case of the Princess, it is the Conjunction of the Pair in the 2nd house of personal resources, that when using them in service to principles of right and wrong, it gave to others, represented by the 8th house, the encouragement to do likewise.

There is a powerful T-Cross in Fixed signs in the chart showing Venus to be in Point Focus as a Focal Determinator for self- expression.  Her earthly beauty was matched by her heartfelt concern for others in a down-to-earth manner signified by the sign of Taurus.  In the 5th house, it reveals the demonstrative attention she always paid to her two boys, first and foremost. Her love, in terms of romantic entanglements is also a 5th house preoccupation, and like every other woman, personal love was for her a primary focus. Uniquely, in the Princess’ case, the Point Focus nature of Venus in the 5th, threw her relentlessly in front of the press and paparazzi, and ultimately into the face of constant public scrutiny. She was, because of Venus in Point Focus, gracious to others because of her own sensibilities. Venus’ keywords very clearly define her. Acquisitive is the basic keyword for Venus and its meaning points to the desires that drive a person to achieve their aims – this she did rather well. In Progressions, Venus is described by the word Sensitivity. Diana’s capacity for tender intimacy is also paramount, and is one of the reasons she will not be forgotten by average people who understand the importance of sincere caring; the trademark of a Venus reaching beyond normal expectations.

She didn’t think like those around her, being born with Mercury in Retrograde motion. And because of that the world had the “pleasure” of witnessing her battles with her own identity. She wasn’t going to be pigeonholed at any cost, and that may have contributed to her rejection of being a mere figurehead in royal life.

The groupings of the planets around the wheel are a series of Conjunctions that gave her the power to intensely impress her ideas and attitudes upon others – each planet giving the ones it stands next to more emphasis to influence outer circumstances. 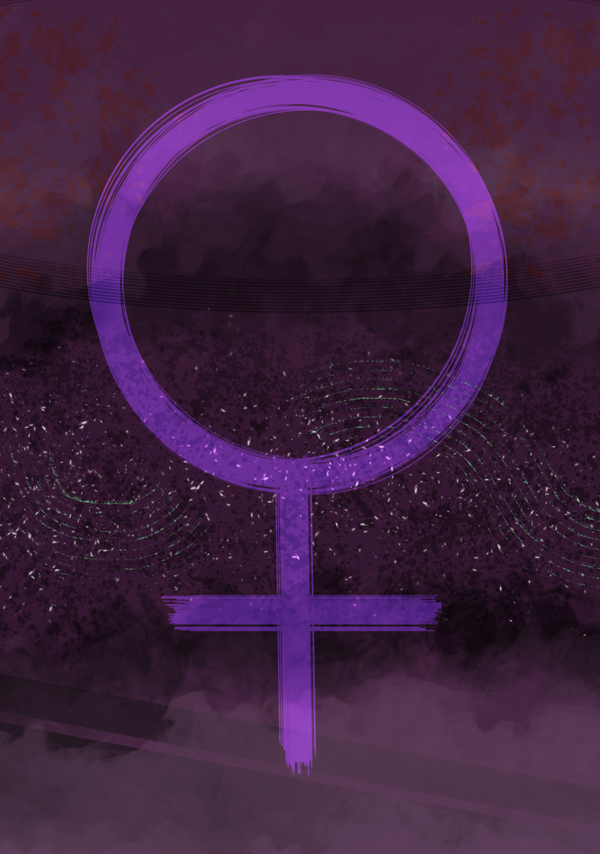 The Sabian Symbols give penetrating insight into the mind, heart and purpose of the Princess’ life. One particular symbol standing out above the rest is Diana’s important Point Focus Venus degree at 25 Taurus, A large well-kept public park. But the true glory of the symbol is seen in its original form, A magnificent public park spreads its charm before the eye in a vista that awes the loftiest spirit. Here in a sentence is the essence of Princess Diana, who can be described herself as a possession of the public in awe of the soul who humbly embraced even the lowliest among us.

Marc Jones’ refinement of definition literally tells the story of Diana’s dedication to society’s commoners. And high-lighted in bold below, is the positive expression of the purpose of her incarnation, as brought to the forefront through the all-important placement of Venus in this one of 360 Sabian Symbol degrees.

TAURUS 25 A large well-kept public park This is a symbol of the everyday integrity of society at large, and of the community divisions of labor through which each person gains the resources for well-being and self-enjoyment which obviously he could never create for himself through his own isolated efforts. There is here an emphasis on the common experience of mankind as the setting for an individual’s worth and achievement in their more characteristic lineaments, and for his consequent self-discovery and self-realization. The keyword is RECREATION. When positive, the degree is a high devotion to the practical welfare of all people collectively, and when negative, a complete surrender of personality to mass judgments and transient superficiality.

THE TRAGIC DEATH OF PRINCESS DIANA 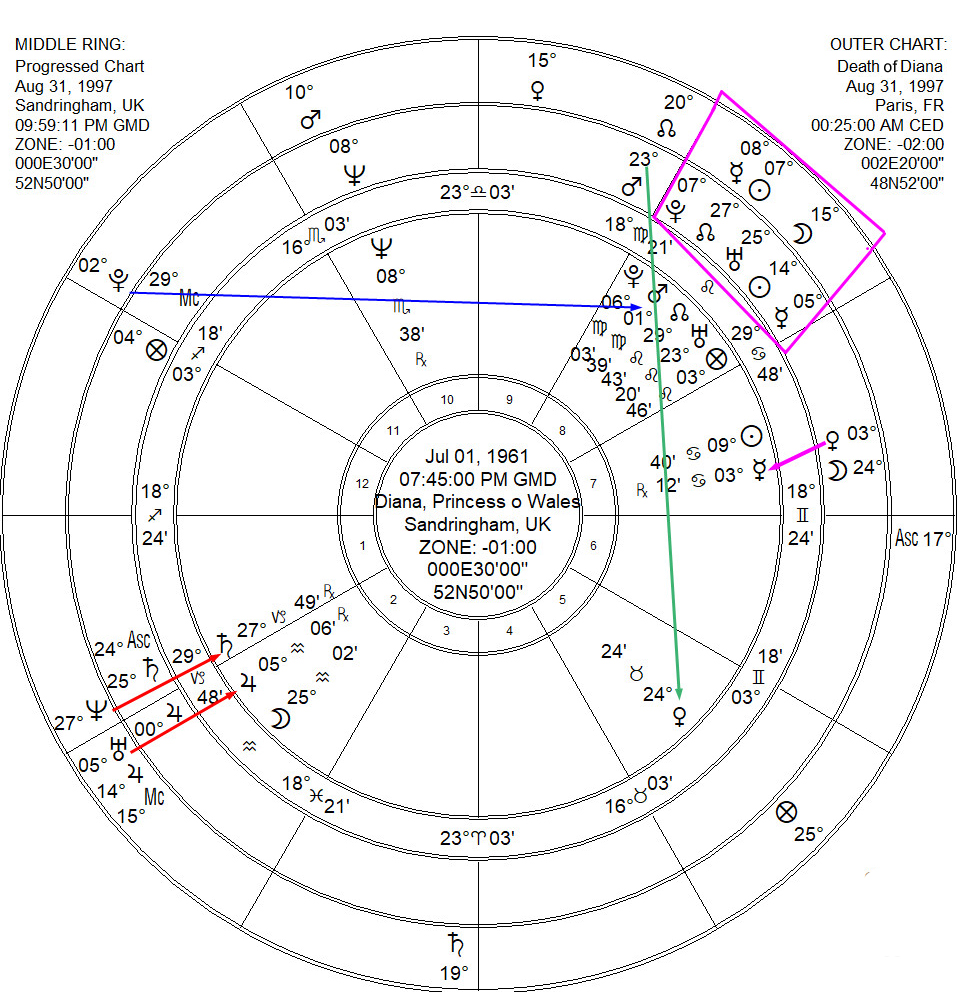 The chart shows Progressions and Transits for August 31, 1997. The 8th house is framed in a pink square and shows the 7th house birth Sun and Mercury now Progressing through the 8th house of the ultimate transition. Very close to the time of death the Transit Moon was Conjunct the Progressed Sun, and the Transits of the Sun and Mercury were just moving away from their Conjunction with natal Pluto in the 8th. All this is a powerful emphasis of 8th house activity.

Diana’s all-important natal Venus Progressed to an exact Conjunction with her natal Mercury at her death, and this correlates to the close tie she had with Dodi Fayed and their recent engagement. Progressed Mars shown with the green arrow, is making a Trine with natal Venus for supportive Aspects that mirror the same intimacy potentials at the time.

Transits too had a significant impact on the challenge and intensity of the situation. All three of the outer planets were in tight association with natal planets. Transit Uranus and Neptune, shown by the two short red arrows at the bottom left, were respectively Conjunct Saturn and Jupiter, the planets identifying Diana’s Sharp Destiny. And Transit Pluto, indicated by the horizontal blue arrow, was in Square Aspect with natal Mars positioned in the ominous 8th house. Transit Pluto on the cusp of the 12th house reveals the dark cloud over the affair in both literal terms and of the matter of the conspiracy theory that the death was planned by the royal family.

For whatever the cause, the world lost a great soul on that tragic night in Paris. Had Mercury not been Retrograde on that fateful day, seat belts may have been used and could have diverted the tragedy. It is interesting to take note of the disturbing quality of the Sabian degree of Mercury Station Retrograde at 17 Virgo, A volcano in eruption, with its keyword EXPLOSION. And the Station Direct at 3 Virgo, Two angels bringing protection is sadly ironic – its keyword, SECURITY.