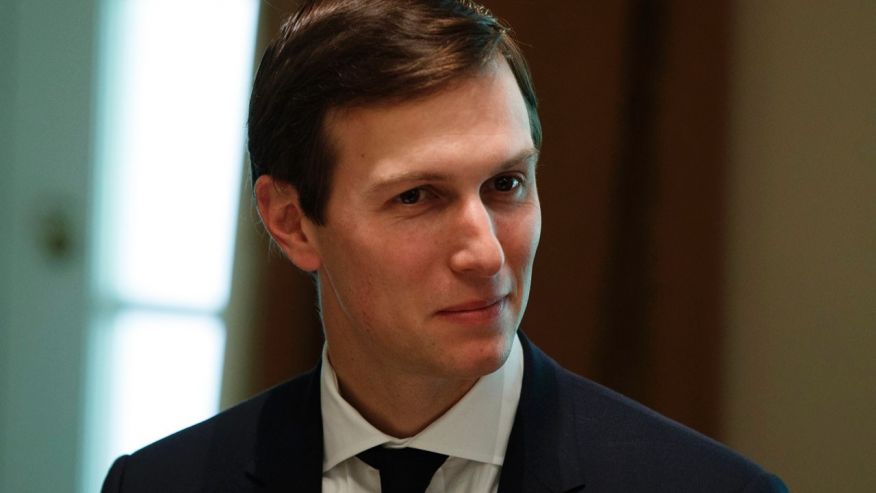 Jared Kushner was probably very uncomfortable on Friday October 27, 2017 when he learned through breaking news on CNN that Robert Mueller was about to indite someone in the investigation of Russia’s involvement in the 2016 presidential campaign. Lucky for Jared that Paul Manafort and his associate Rick Gates were the ones on Mueller’s list for the time being. But not so fast, a look at Kushner’s horoscope shows he is up next or at least a possible suspect down the line. He will not escape some very big transformation in his life when Pluto starts its 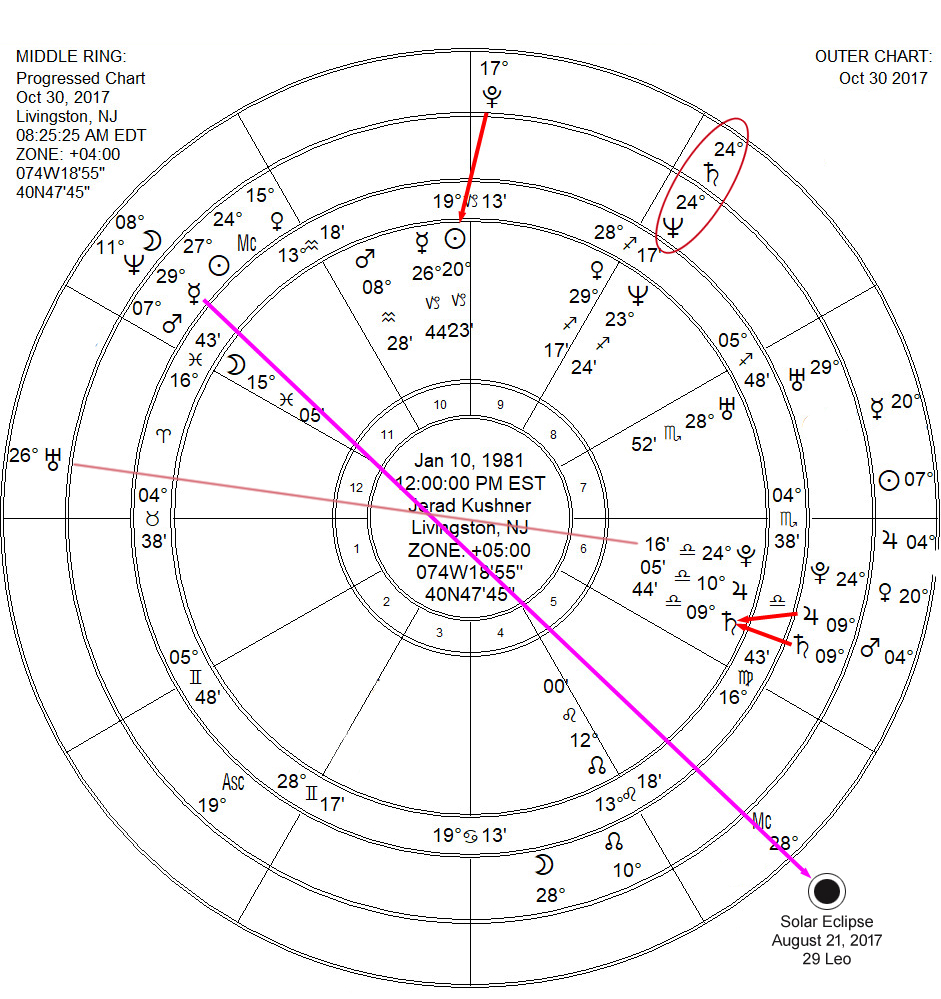 Transit over his natal Sun at 20 Capricorn 23.

PAST AND PRESENT ASPECTS

Several Aspects in the chart show recent experience that involves Saturn, Uranus, Neptune and Pluto. These four planets represent the most intense challenges in life, and those that promise or threaten big change and calling to account of behavior. The two short red lines show Jupiter and Saturn, together in the October 2017 Progressions, just minutes beyond a Conjunction of Kushner’s natal Saturn at 9 Libra 44, The Sabian Symbol for this degree is, A canoe approaching safety through dangerous waters. Here is an attempt to correct some of the feared charges that might be held against the young and naive but proud presidential adviser. Most likely he is being assisted by lawyers helping to “row” a troubled client toward safety. The meaning of the 6th house includes the need to adjust and correct errors and flaws in the dealings with others in the process of fitting into society. Kushner’s Jupiter and Saturn in Conjunction reveal a responsibility to live up to higher moral standards. It is a Sharp Destiny, and one that calls the individual to consider carefully the prodding of conscience. If one fails to do so, there are almost immediate consequences to be paid. Kushner’s father-in-law, the current POTUS has a Sharp Destiny as well, with a Jupiter/Saturn Square.

The October 2017 Transit Saturn, circled in red, is a reinforcement of the challenging Jupiter and Saturn Progressions by its Conjunction of natal Neptune. Saturn attempts to clarify, for future testimony, the cloud of confusion that gathered over the young man’s vague activities during and after the 2016 campaign.

The faint peach line points from Transit Uranus to natal Pluto showing an alertness to to the myriad duties with which Kushner suddenly found himself in charge. It also shows the possibility of those involvements to be of a profoundly widespread and perhaps deviant nature. Pluto, in better circumstances, stands for truth of the highest order, which does not seem the case at present in the young man’s regard. Uranus, if not subject to a high degree of discipline, can show a tendency to rogue activity on the part of the native.

The Progressed Mercury is an additional feature of the complex of interplanetary relationships, through its Opposition to the placement of the Total Solar Eclipse of August 21, 2017. Unfortunately, we do not have the house where this astrological event took place, which would have given a keyhole view into the details of how this planetary scenario could play out in future circumstances.

The most threatening of the Transits is the one on its way that is bound to cause great havoc in the life and career of one who could have been brought to greater integrity if it were not for mistakes made in earlier years, and now in his connection with the dubious circumstances of his father-in-law’s presidential campaign. The coming Conjunction of Transit Pluto, shown by the single red line at the top of the chart shows the natal Sun awaiting the Transit that will most likely be the timing of a fall from power – or at the very least, great pressure for transformation. This is in contrast with the otherwise more respectable Probity that Pluto at its best can represent, if one was wiser in his use of the great responsibilities thrust upon him by his proximity to the Trump family.

The houses in this analysis are not taken into account for the lack of an exact time of birth. However, there is much that can be seen in the recent pass of Transits and Progressions, as well as the possibilities coming through the ominous Aspect of Pluto with its exact Transit Conjunction of the Sun on February 20, 2018. The Station of Pluto on April 23, 2018, at 21 Capricorn 17, truly poses the most threat to the well-being and vitality that the Sun represents, because it takes place within a one degree orb of exactitude. Stations always indicate the times of most influence that the planets exert on an individual. From that position of the Retrograde Station Conjunction, Pluto will Transit back over the Sun degree throughout the entire month of June and part of July. Pluto continues to Retrograde until it Stations to go Direct in late September 2018, at a distance close enough to cause more intensity in Kushner’s experience concerning a regrasp of his purpose in life through great trial and tribulation. It is an Transit of long duration.

This continued Transit activity with Kushner’s Sun points to several “moments of truth” that promise to bring unsolicited growth and enlightenment. For better or worse Pluto will play a huge role in Kushner’s life that he will remember for the rest of his years. And if transformation is not completed with the Transit of the Sun, the following and future Pluto Conjunction of natal Mercury will give him another opportunity to correct his perspective and perception of life.

A lack of an Opposition Aspect in his natal chart puts Kushner at a disadvantage by limiting his awareness of self and the consequences of his acts (pg. 16-17,  Essentials of Astrological Analysis). The strong Transits and Progressions hopefully will bring him needed lessons that act as compensation for the lack of one of the most vital planetary configurations that facilitate conscious awareness and sensitivity to external factors for better decision making.

There is no possibility for a T-Cross – Point Focus, Focal Determinator without an Opposition in the chart. And because of the lack of a birth hour it is impossible to define if there is a planet that could be in High Focus by virtue of being Conjunct one of the angles. Natal Saturn is prominent however, as a Focal Determinator by being the Cutting planet that leads the planetary group clockwise through the houses in the Bowl Temperament Type. Saturn also partakes of a Sharp Destiny, because it is in a Conjunction aspect with its pair, natal Jupiter. Sharp Destiny always holds the life in diligent and poignant focus by being challenged to do one’s moral best. If the native is not inclined to live the dictates of higher standards, outside circumstances will prod them through great pressure with a demand to change one’s ways.  Kushner’s and his father-in-law both share this constant criticism that has the purpose of leading the consciousness to greater and respectable behavior. The conscious mind is challenged through trial and error to make constant adjustments to align the behavior with higher conscience (pg. 343, Essentials). The failure to do so often causes inner struggle, doubt and anxiety.

Sharp Destiny always puts an individual under the harsh scrutiny of public opinion. Other individuals analyzed in this respect in the Political arena are Hillary Clinton, Bill Clinton, Donald Trump and George W. Bush.