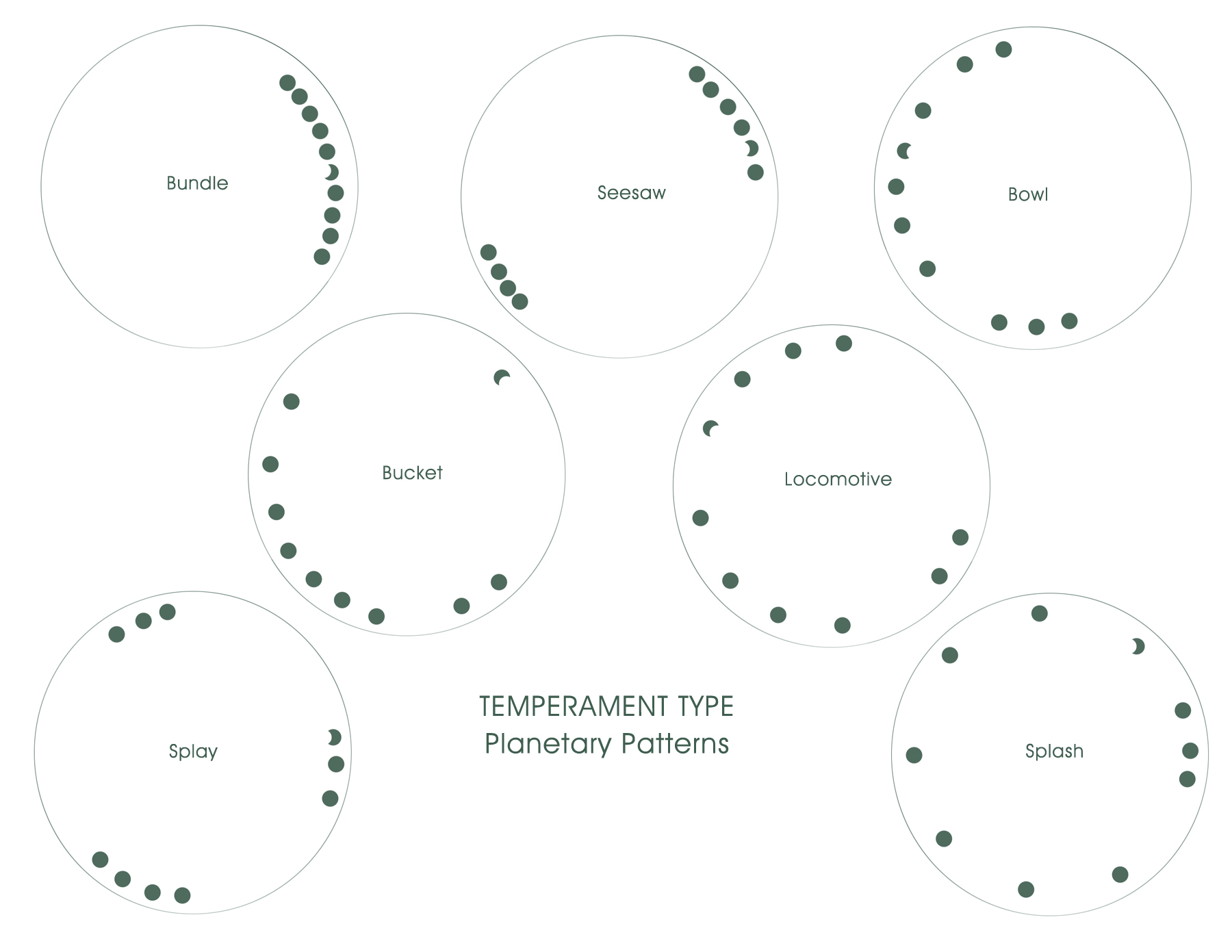 Planetary Patterns form as planets aggregate in unique groupings while orbiting the Sun. Seen from the Earth’s perspective, these seven recognizable shapes are the matrix for the five major aspects in astrology; the Conjunction, Sextile, Square, Trine and Opposition. The patterns are in constant flux, due to the varying speeds of the planets themselves. The three very slow-moving outer planets, Uranus, Neptune and Pluto, represent the base notes of the solar system so to speak, and they chart the gradual development of evolving life on Earth. They identify the nature of humanity’s group orientations, as they transform from religious and culturally cloistered pockets of activity which Jupiter and Saturn represent, to a broader and more universal and all-inclusive conscious self-awareness. In some respects, they are the unconscious motivating forces at work in humanity’s evolution from darkness to Light. But for the seeker of life’s meaning, they encourage an upward movement from subterranean levels of autonomic behavior to elevated and refined states of conscious being.

The outer planets are the harbingers of consciousness transformation, which then becomes the stable foundation of Universal Mind. In contrast, the swifter moving planets are associated with the more personal attributes of human character, and point to habits of daily living and convenience. The diagram above shows examples of the ideal formations of the seven Planetary Patterns. 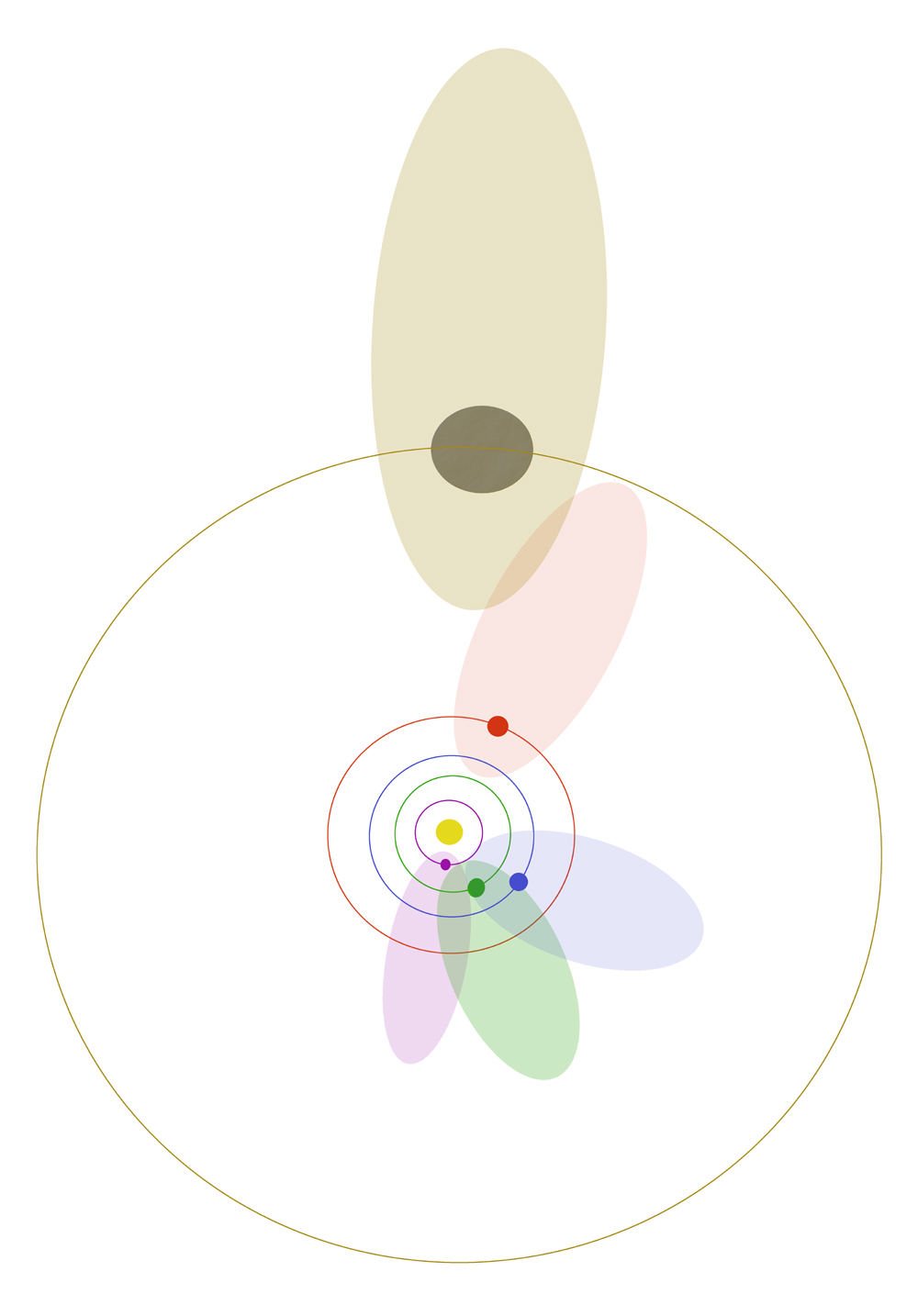 These seven basic Planetary Patterns represent humanity’s diverse modes of responding to life as a whole. That is why they are also called Temperament Types. They refer to human emotional and behavioral responses to local environmental stimulus, and to the world and universe in general. To identify the way in which an individual is prone to view and respond to outer conditions, one must identify the pattern of the planets in their particular horoscope. This can be challenging at times when the planetary groupings take on a kaleidoscopic imagery as they move out of and into succeeding patterns. The mass of humanity does not wait for an ideal pattern to form in the solar system when they incarnate. But with a bit of analytical work on the chart, the Temperament Type can be identified and used as a tool to decipher potentialities.

The simplest transition from one pattern to another can be seen in regards to the Bowl shape as it morphs into the Bucket pattern. The Moon is the swiftest of the moving bodies in the astrological solar system. It cycles the Signs of the Year (zodiac) once a month, and it plays the role of the Handle of a Bucket pattern when opposite the Bowl segment. It becomes the Bowl Temperament once again when it moves back into the more populated half circle. The challenge in defining this Temperament comes when the Moon as a Handle is not quite perpendicular to the center of the Bowl. Further analysis brings into play the nuances of the Temperament. The chapter on the Temperament Types in The Essentials of Astrological Analysis will assist in understanding the fine details of the seven Types.

How do the planets and their electromagnetic fields relate to the morphogenetic field? The answer to this question is: They relate in every way. It is an ancient concept that energy fields influence organic life on Earth. This topic is now being revisited by Rupert Sheldrake, the controversial biologist who bravely goes where conventional science fears to tread. Sheldrake professes that there is an ethereal and intelligent, unseen unified field that gives rise to visible form. As an astrologer, I would like to point out that it is the Sun, Moon and planetary fields that are the morphogenetic source and matrix itself, and the colorful graph of orbiting planets suggests how those individual fields might overlap and synergize. The field, or plasma, acts as an ever-developing potential; a molecular/chemical “instruction” for life on Earth. Observing life events and experiences, in correspondence to planetary movements in a horoscope, reveals the binding relationship between the two factors.

Our physical bodies resonate to the morphing solar system’s fields. They do so through our central energy system known by the Sanskrit term Chakras. The Chakras are circular and spiraling vortexes that have specific vibratory frequencies that instantaneously, through the ether or plasma, give substance to conscious mind – also known as consciousness or conscious self-awareness. These are the Macro and Micro elements of life in coalescence. All things vibrate with life energy and magnetism. And the human body too, exudes electromagnetic frequencies to take part in the complex play of forces in which we live and have our being.

Since we are discussing Planetary Patterns and how they give substance and nuance to the morphogenetic field, it would be convenient to use the example of Rupert Sheldrake’s chart to identify one of the Temperament Types. Sheldrake’s horoscope is a Bucket pattern that deviates slightly from the ideal or norm. There is the necessary single planet s 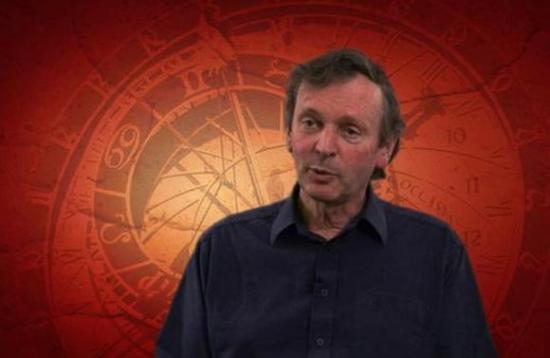 et off by itself that becomes the High Focus Handle of the chart, but the Bowl segment does not have a Delimiting Rim Opposition to make it ideal. Although Marc Edmund Jones considers the Bucket Temperament Type to include those shapes where the bowl segment has no delimiting Rim, this departure from the ideal has lead to the alternative title Funnel Temperament. This term facilitates a more literal expression of the way in which this Temperament functions without a Rim. The term Funnel was made popular by the Humanistic branch of Astrology during the 1970’s. When there is no Rim Opposition, the contents of the bowl are not stymied on there way to self-expression, and the unencumbered energies are funneled directly to and through the nature of the Handle or Spout planet (see chart #1). This High Focus single planet, with its sign and house placement, is considered the point of release of talents that assists the native in the manifestation of his potentials. Here is where he develops a “handle” on the entirety of his personal gifts and accomplishments, and thus has a focused outlet for his purpose in life.

Sheldrake’s High Focus Moon is in the 2nd house of personal resources and in the sign of Discrimination. The Moon gathers and channels his highly selective discoveries into the domain of his own personal psyche. Then with the facilitating exact Opposition to the Sun in the 8th house of other people’s resources and approval, he manages to share the contents of his otherwise private worldview. And as Oppositions often show, there will be times when his shared knowledge receives approval, contrasted with times of rejection from those who find it hard to comprehend the illusive nature of Sheldrake’s mission and message.

Note that Venus and Neptune, buttress the funnel’s contents with a Trine over the line of the sign. This allows the free-flowing nature of the 120 degree aspect to easily empty its contents 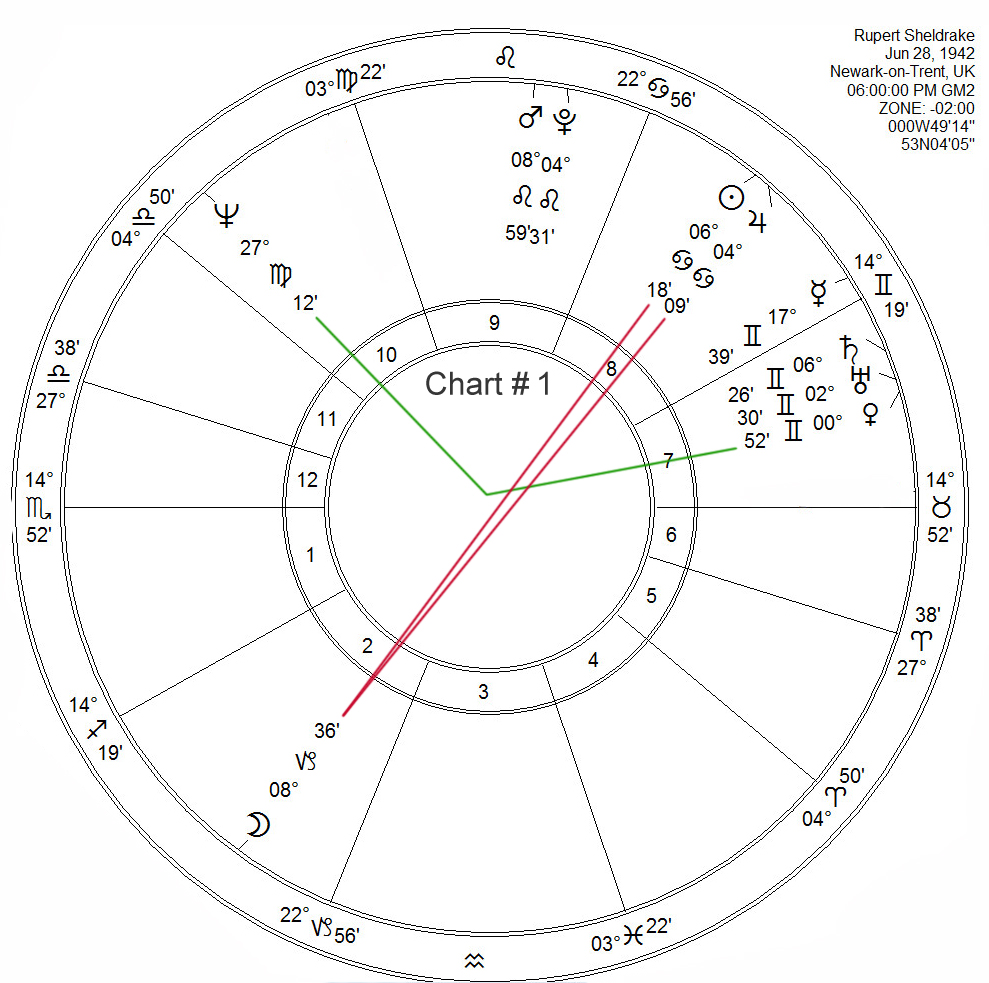 toward the High Focus Moon Spout, with its keyword INTENSE. The Core Opposition, shown with red lines, thus becomes more prominent in an interpretation, because of the lack of distracting and challenging co-aspects. The Bucket or Funnel Pattern identifies a person with an profound objective; on a definitive mission to accomplish. And Sheldrake is certainly an example of one with a overwhelming drive to carry his cause to its final destination of public awareness of unseen forces. And he accomplishes his mission, through his revealing demonstrations of the subtle powers of receptivity that the Moon so well represents. 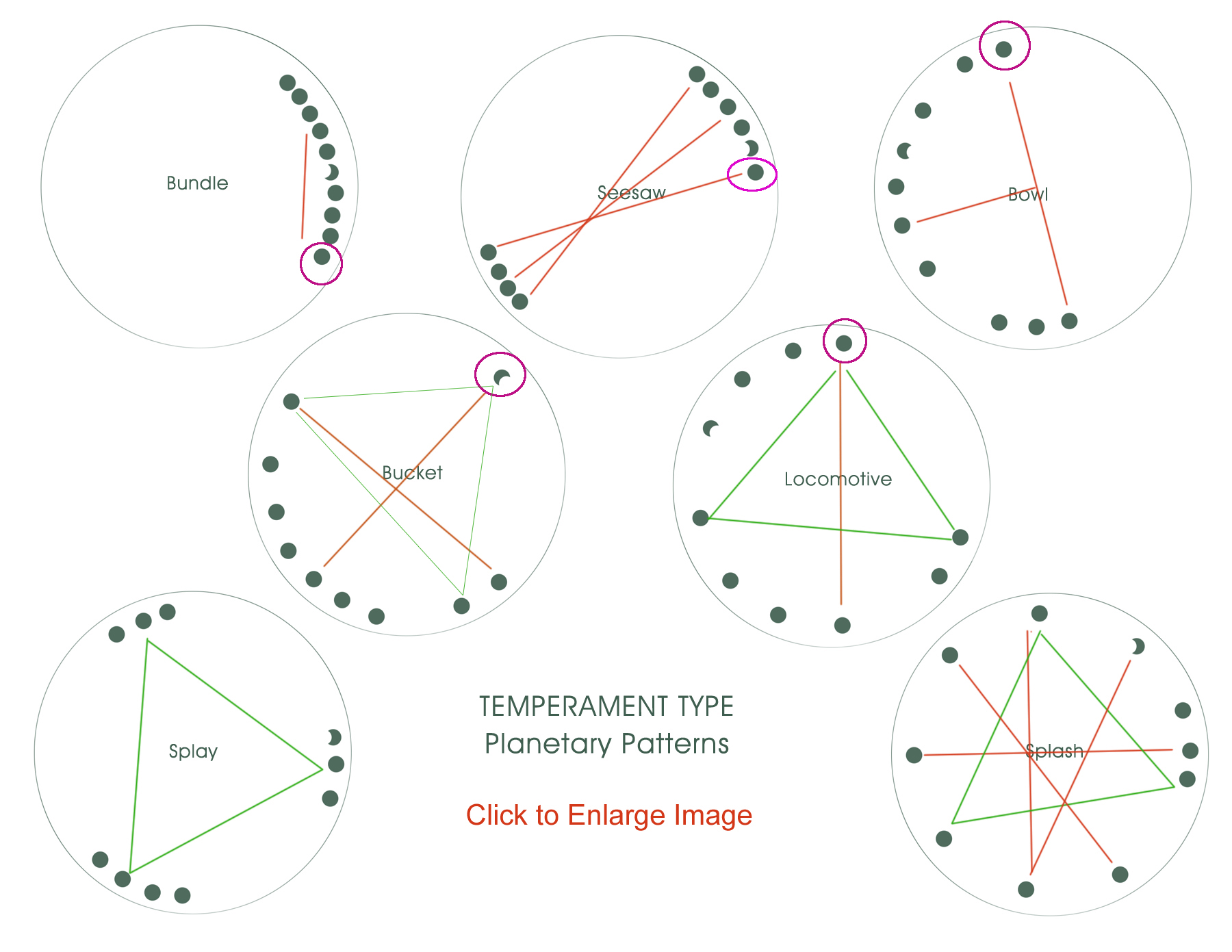