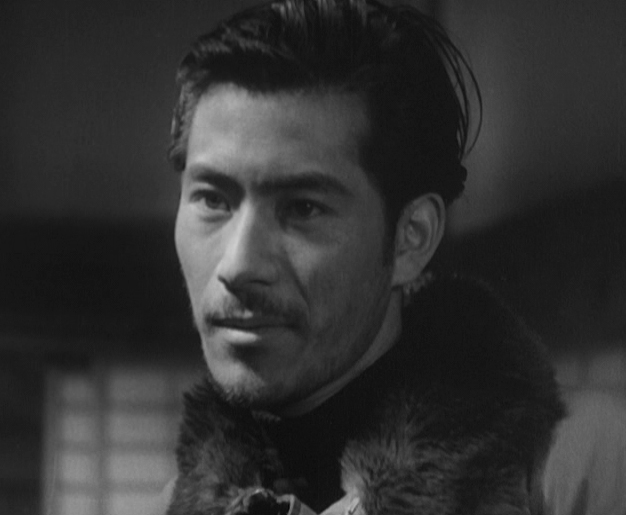 Actor Toshiro Mifune and director Akira Kurosawa had a collaborative destiny in film par excellence. Both were superb in the expression of their individual talents, but it is to Toshiro Mifune that we will focus our attention. We’ll look to see what it is in the heavenly bodies that reflect what took place during his lifetime career film.

Toshiro Mifune was born in China to Japanese parents, and followed in the footsteps of his father’s career in the arts, albeit in film as opposed to still photography. His first encounter in the arts was when he was a very young child when his father used him as a model. As he grew, he was catapulted into starring roles because of his larger-than-life prowess on screen.

The emotional power he exuded is easily seen in his natal chart by the Grand Water Trine shown by the connecting orange lines that form a triangle. Pluto and Mars play an essential role in this triangular configuration that develops in a pyramiding of personality over time. Grand Trines create momentum for good or for ill, depending on the grooves of experience with which the native concentrates their efforts. If a negative habit pattern of activity is set from childhood, there is the possibility to break away from that downward spiral through the activation of any squares aspects the native has to the Grand Trine that stops the momentum. Mifune’s chart shows he has the capacity to break negative cycles that are the perpetual patterning of the Grand Trine by Jupiter and Neptune both in square with Mars. The force of his personality shown by Jupiter and the authority displayed by Neptune is enough to stop any habits that get in the way of his personal ambition. The pyramiding High Focus Mars in Scorpio is in its rulership, and that endowed Mifune with ultra sex appeal, although his roles were played out in restraint, making him all the more desirable. Off a bit by itself, Mar becomes Excitation as a keyword, as opposed to its normal keyword Initiative.

The Jupiter-Neptune exact conjunction shows the potentials as a screen personality. The exact conjunction is also the give-away indicator for the heavy drinking for which he was notorious. Neptune rules the screen of the mind and imagination, and a projection of that is the actor’s image played out on the silver screen of the film industry. Jupiter expands that potential, making the actor’s roles “bigger than life.”

Five planets are retrograde including Mercury, and that is likely the reason for his quiet internalized intensity for which he was known. The sympathy and compassion for his fellow actors and the tender side he revealed to some are shown by the three planets in Pisces. Uranus is the Leading Planet of his powerful Locomotive Temperament Type, and the pattern is fairly ideal since the chart includes the necessary Grand Trine and Core Opposition from the Leading Planet’s application to the natal Moon. The keyword for Uranus in High Focus becomes Experimentative, instead of the keyword Independence, it would have been if remaining in a normal and less prominent role. 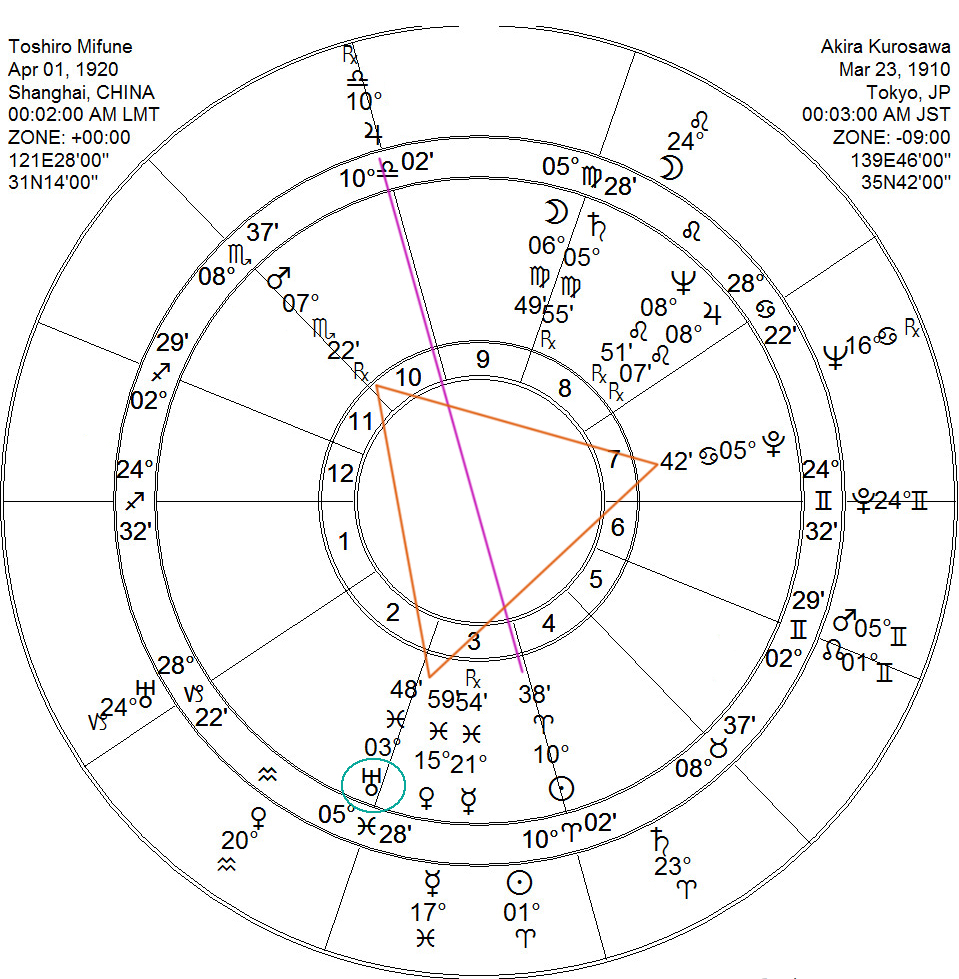 If Mifune was born in the wee early hours of April 1, 1920, his Sun’s Sabian Symbol would be The president of the country.* What is fascinating about the description of the symbol is the several references to playing a role among his fellows and of the impact that position would have in bringing the native notoriety. The powerful impact of the personality on others is shown in the chart through multiple Conjunctions. Planets that join forces amplify their potentials to the outside world.

The astrological connection between the two creatives is shown by the very tight Opposition of Kurosawa’s Jupiter, shown at the top of the outer wheel, as it opposes Mifune’s Sun at the bottom of the inner wheel. This is great good fortune for the team of two, with Kurosawa being a Paternal (Jupiter’s keyword) figure to Mifune and one that encourages a release of potentials represented by the Will of Mifune’s Sun in Aspiring Aries. With the natal Moon conjunct Saturn, there is a more calculated rather than spontaneous method in his acting, and Mifune was known for preparing far in advance of performing. The trine to the Sun from the Jupiter-Neptune conjunction is all the support he needed for a smooth expression of his talents.

Among the 15 major collaborative films shared by these talented men are Rashomon, Seven Samurai, The Hidden Fortress, Throne of Blood, and Yojimbo.

*ARIES 11 The president of the country This is a symbol of high ego on the impersonal side, evident in the complete and naïve dedication of the individual to some part he chooses to play among his fellows. Implicit here is the selection of such a role as will have a maximum breadth of recognition, so that the player may be established in a reality which he would be quite unable to sustain by himself. There is a subordination of all other considerations to one primary act of individual assurance. The keyword is IDEALIZATION. When positive, the degree is the self-sacrifice required of anybody who would be­come the creative representative of eternal value, and when negative, an often well-meaning but usually destructive assertiveness or vain pretense.

One thought on “The Bromance of Mifune and Kurosawa”