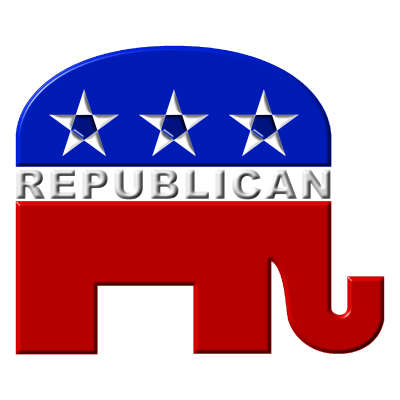 If anyone is wondering what is happening in the “stars” for the US Republican Party, it is all here in their Natal chart. The main dynamic feature is Transit Pluto Opposite the Party’s Natal Sun at 15 degrees Cancer, shown in the chart by the orange arrow pointing to the Sun in the center wheel’s 9th house. While Transit Pluto was Stationing in the latter part of September 2016, the Party took on a bizarre turn in their self-expression through the medium of its presidential candidate, Donald Trump.

Absurdities surrounded and haunted the candidate and culminated with the broadcast of a rather vulgar incident that caught Trump unexpectedly on tape with a hot mic in a studio tour bus in 2005. To defuse the outrage the candidate referred to his dialogue on the bus as normal “locker room” banter – in spite of the fact that several known athletes came forward to protest and state that this was not routine or acceptable behavior.

An Opposition from Transit Pluto to any planet in a Natal horoscope is a profound challenge to dignity and Probity (keyword for Pluto in the dynamic chart). However, the chart of the Party shows Progressions in the middle wheel and Transits on the outer wheel that exacerbate the overshadowing Pluto Transit. The challen 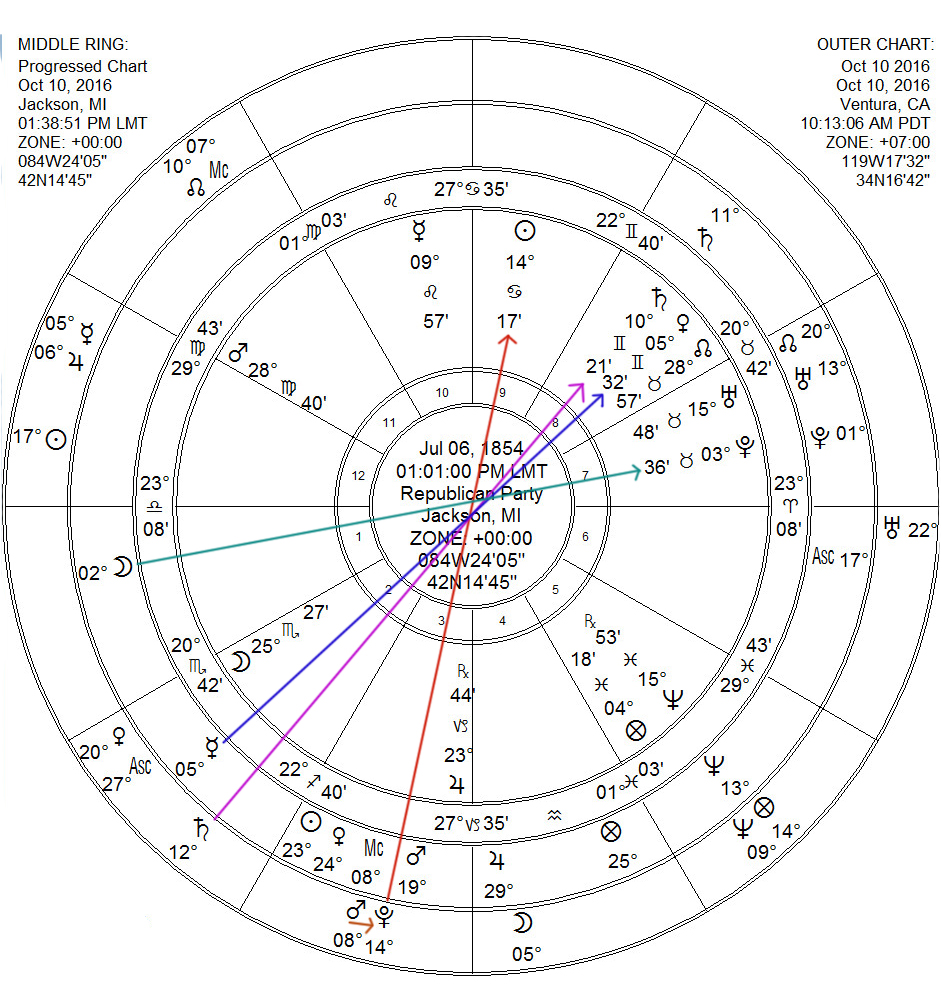 ging Opposition aspects’ positive outcome would be to transform and clearly define the Purpose (keyword for the Sun) of the Party, and this is undoubtedly happening behind the scenes. Between October 18th and the 21st, Transit Mars and Moon will be Conjunct Transit Pluto in Opposition to the Party’s Natal Sun. We will be experiencing more of the polarizing effects during those days before the election. It is shown in the chart with Mars’ arrow moving toward Pluto in the outer wheel at the bottom of the chart.

With two major Oppositions from the Progressed planets, and two major Transit Oppositions, it is apparent that something big is in the works for the Republican Party in the election of 2016. This is confirmed by the Party’s Conjunction of its Natal Sun with the Natal Sun of the United States. They have always had a mutual Conjunction, but what makes the difference now, and what makes it so significant, is the Transit of Pluto in Opposition to both their Natal Suns. Here is a manifestation of power coming into the hands of the Republicans, and a continuation of it can be predicted because of Transit Pluto’s eventual Conjunction with the Party’s Progressed Mars at 20 degrees Capricorn shown at the bottom of the chart in the middle wheel.

It is the Natal Moon/Sun Opposition in Trump’s chart that draws most of the conflict and controversy into his life and the life of the Party. This is because when the Sun and Moon are opposite each other in a Natal chart, the native often goes in a direction (Moon) contrary to the true Purpos 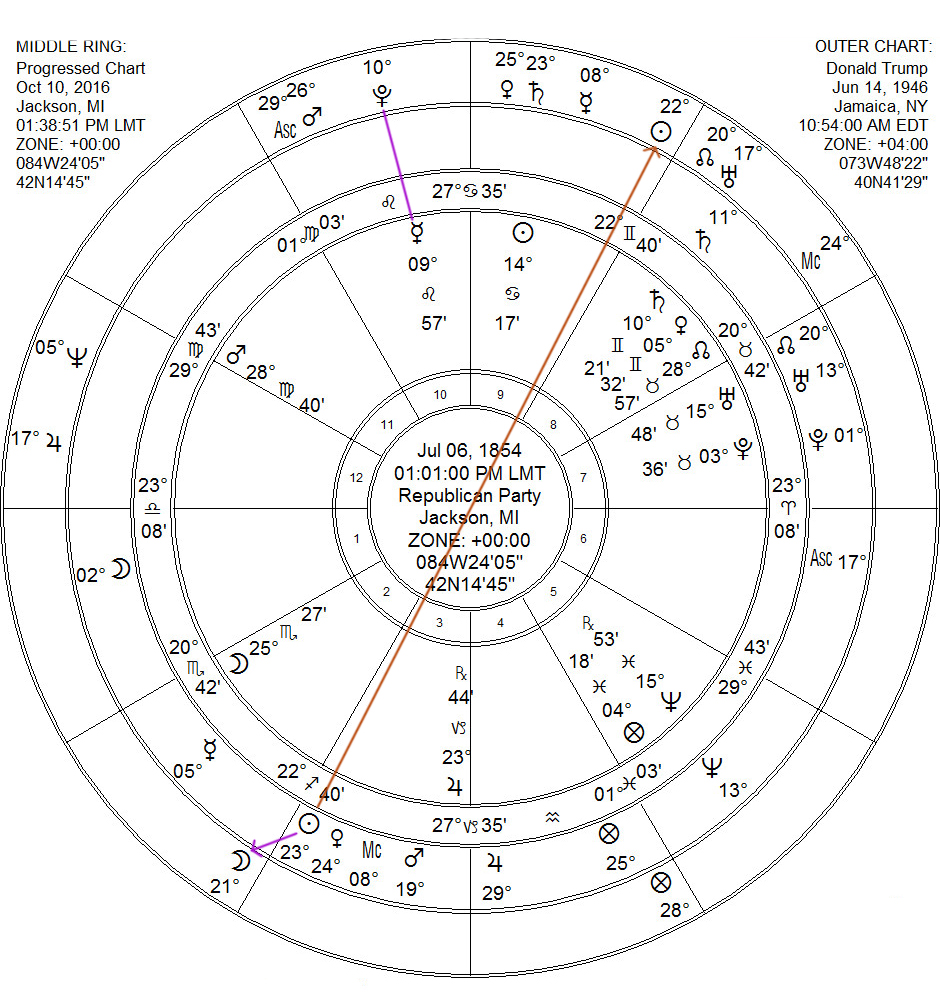 e (Sun) of the given life. This results in an inner conflict to contend with. It is interesting to note as well, that the Transiting Moon was Opposite Trump’s Sun in the early hours of the morning of October 7 when the scandalous video mentioned above broke out in the news. That provocative Moon Transit is not shown in either of the charts in this post.

The chart below shows a purple line connecting Trump’s Natal Pluto Conjunct the Party’s Natal Mercury. This indicates the profound and overwhelming effect that Trump has on the basic tenets of the right wing. This can cause an almost dictatorial attitude in communications with the Party, with a resulting sense of being overwhelmed by impossible demands.

The fuchsia line, starting in the 2nd house outer wheel of the chart above shows Saturn has been Transiting in Opposition to its own Natal position. This points to a culmination in full self-realization, and to a time of completion of an adolescent period that moves toward a coming of age. Saturn revolves around the Sun in a 29.5 year cycle. At the Opposition point, at around 14 to 15 years, it becomes equivalent to the time of puberty in the life of an individual. In other words, for the Republican Party, here is the indication of a need to grow and go forward, ready to proliferate with a more mature state of awareness.

Another very strong indication of conflict and direct challenge is shown with the Party’s Progressed Moon in direct Opposition with its Natal Pluto shown by the green line in the chart above. This aspect also reveals the coming to power of this Party at this time.