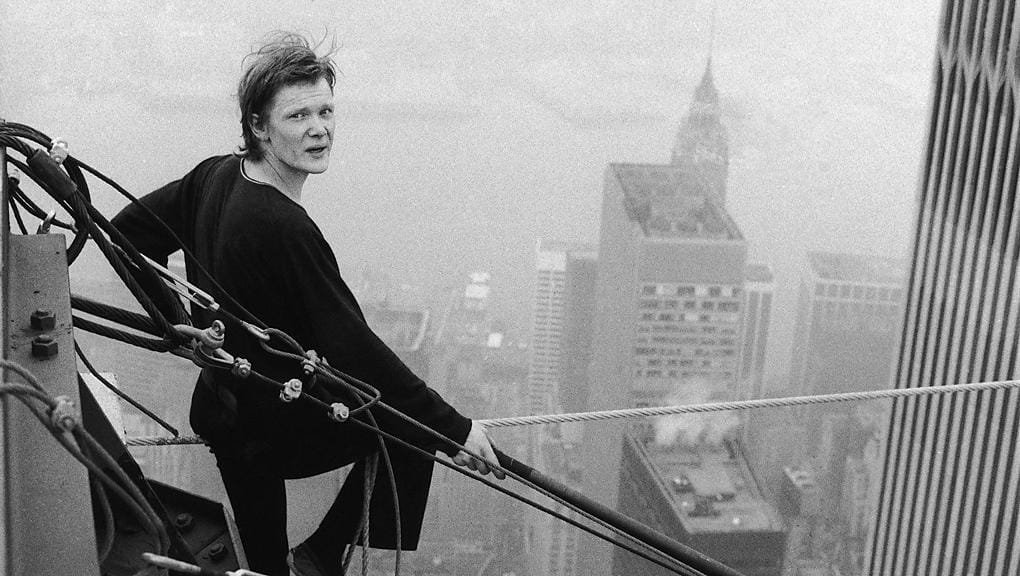 In New York City, August 7, 1974, Philippe Petit walked on Wire from the top of one of the World Trade Center’s towers to the other. His motivation was to accomplish something personal (Jupiter) that would gain him notoriety with the public (Moon). This shows up conveniently in the Natal horoscope with Jupiter and the Moon set off from the other planets and independent of each other, as well as a Pluto/Sun Conjunction. But the really strong indication to be in the public eye and to accomplish some outlandish feat is the Mars/Uranus (indomitably radical) Point Focus of a T-Cross Conjunction embracing the Midheaven. It is well known that he was always a climber and that his parents and any other authority over him could not control his drive to explore. 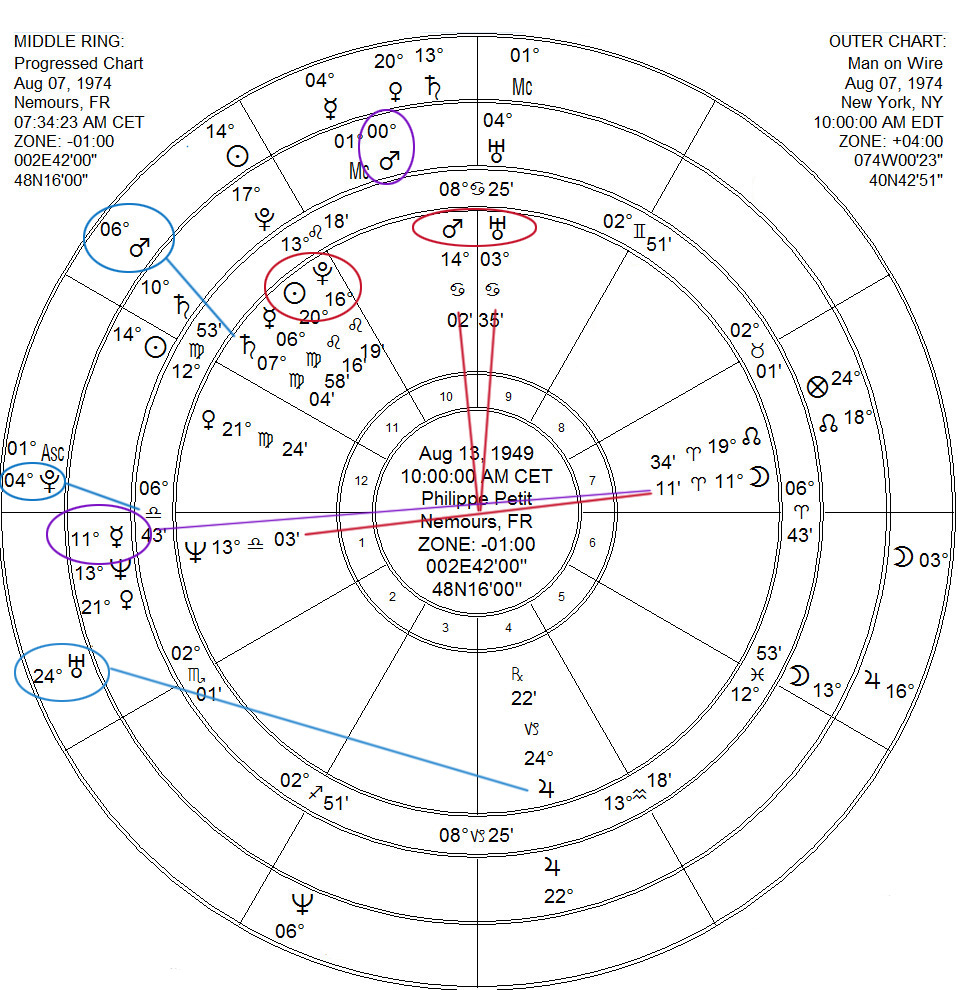 What was happening in the Transit and Progressed charts is interesting in that it involves the important Mars in several ways. The Progressed Mars (shown circled in purple) is in the degree of A case of apoplexy. This phrase is not as revealing as the original symbol description, which is; A normally good natured man of affairs is red to bursting to have his own way.

This symbol of the Progressed Mars in an uncanny way, literally explains the makeup of the native at the time of his exploits in New York. He was unstoppable. And that is the meaning of a very strong Natal Mars.

Progressed Mars: LEO 1 A case of apoplexy This is a symbol of an overwhelming potentiality, and of an ever-pressing necessity for genuine self-establishment and personal stability. Implicit in the reversed symbolism is man’s complete lack of inhibition in his everyday make-up, together with his ability to mobilize all his powers and even risk his own existence rather than accept any thwarting of his desires. Here is emphasis on the unbroken continuity between being and doing, or between identity and its continual manifestation of itself. The keyword is IRRESISTABILITY. When positive, the degree is creativity in the day-by-day expression of the self’s real possibilities, and when negative, thoroughgoing self-indulgence and imposition on others.

Pluto Transiting very close to Petit’s Ascendant is another indication of the obsession to become a powerfully known personality, by attempting a daring act that had never before been accomplished and most likely would never be again. Pluto indicates ultimate extremes and this fits perfectly into that picture. Supporting this in the Natal chart is the Conjunction between the Sun and Pluto in the 11th house – this shows an obsession with reaching his goals in life.

Transit Mars comes close to Natal Saturn on the day of his performance and Mars is in the degree of A harem. Normally I would focus on the symbol for Saturn which is important because of the birth potentials active throughout the life, and the Transits are just that, transitory. But the symbol of a harem is revealing in that when Petit completed his daring feat, just as he was being released from police custody, he was approached by an attractive young woman who wanted to be the first to congratulating him with an afternoon of intimacy in her hotel room. Petit was caught in the glory of his now notorious accomplishment and was unfaithful to his dutiful girlfriend, who was now just one more member of the harem. Saturn is only 3 minutes over the line and is so close to the harem degree, but in all honesty, we must acknowledge the true symbol of 8 degrees Virgo of a First dancing instruction. Perhaps it was a dance across the wire that Saturn indicates in its birth potential.

The symbol for A harem is worth posting here:

VIRGO 7 A harem This is a symbol of the withdrawal from reality in one aspect as a means for regrasping in another, here dramatized by an acceptance of regimentation as a species of insulation against life’s demand for some more dynamic manifestation of the self. Implicit in the static symbolism is the necessity for using any fellowship in lesser values as a self-strengthening in a definite and renewed struggle towards the greater. An enforced conservation of energies need not encourage a surrender of basic ideals. The keyword is RESTRAINT. When positive, the degree is a courageous and complete disregard of limitation by the rejection of its terms at any cost, and when negative, self-betrayal for momentary ease.

The words in red definitely speak to the mood of the moment – at least in the context of a very real opportunity that would not have happened had there been no risk or challenge.

Progressed Mercury is exactly in Opposition to Natal Moon, showing the activation of the Natal T-Cross with its focus on the Midheaven resulting in ultimate fame for an unusual and physically challenging feat.