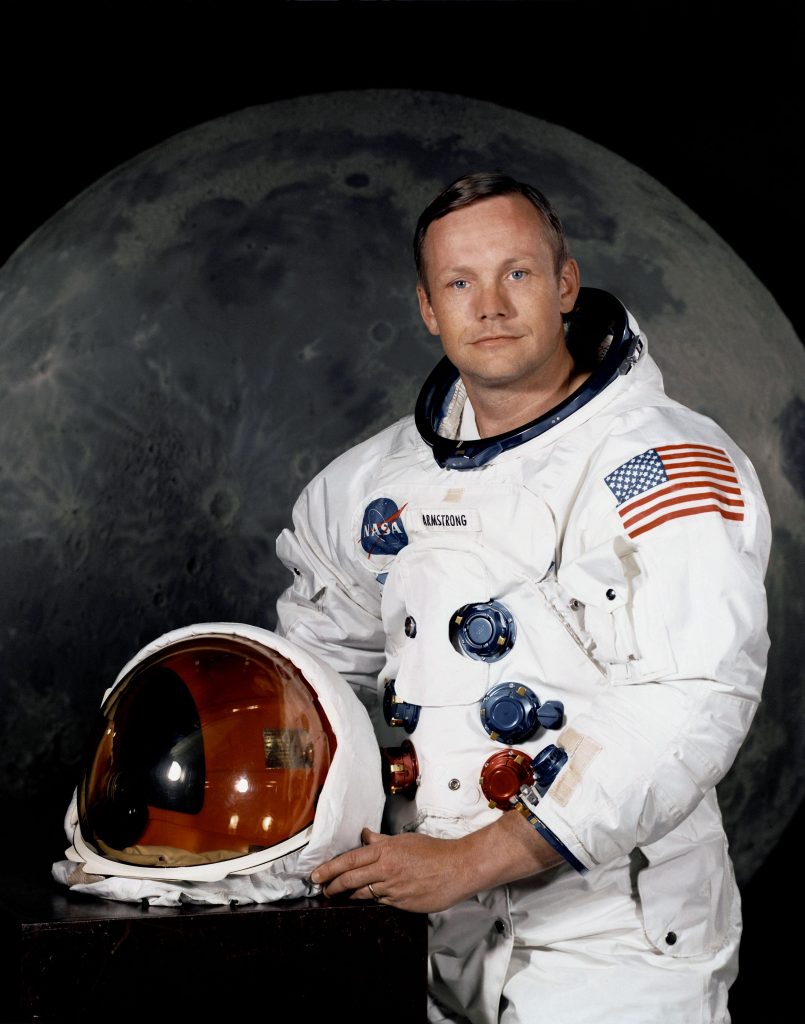 Neil Armstrong, an American astronaut and hero, took us to the Moon and back safely to Earth, following the aspirational ambitions of John F. Kennedy as one of his goals of the decade.

Armstrong’s T-cross, formed by a natal Moon opposite Mars, points its focus at Venus to bring appreciation for the hard work and effort the astronaut accomplished for the American public, as well as the entire world.

Venus’ Sabian Symbol degree literally states that there is, “some measure of immortal contribution to history” that can manifest through his astrological potentials. The symbol’s keyword is RESPECT, and that is what Armstrong received from all who knew him well and all who were touched by his bravery, skill, and determination. He will always be remembered for the concise but profound words he uttered when stepping onto the surface of the Moon; “That’s one small step for man, one giant leap for mankind.”

VIRGO 25  A flag at half-mast.  This is a symbol of the inevitable judgment which life must pronounce on itself, and of the sure rewards that stand ready for whatever proves of worth in the course of effort. The highest of everyday values for the common man are created in a public service which has its first compensation in the individual’s self-fulfillment, and its ultimate justification in some measure of immortal contribution to history. Reputation is the subtle coin by which personality creates an enduring wealth for everyone, to be preserved no less in death than life. The keyword is RESPECT. When positive, the degree is achievement in a full transcendence of selfhood, and when negative, superficial self-dramatization.

It is important to point out the planetary features in the dynamic chart that mirror the significance of the Moon landing and being the first person to do so. Astrologically the factors of significance are the two planetary stations in Armstrong’s progressions occurring a few years before the 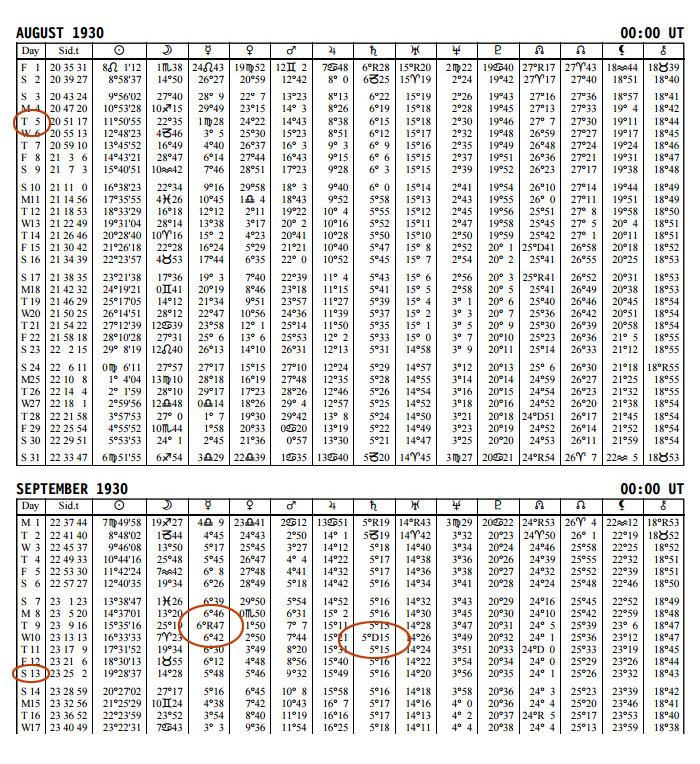 actual lunar mission, pointing to the developmental years of preparation for this monumental event.

Mercury turning stationary-retrograde shows that in spite of being worthy of celebrity, Armstrong chose to turn inward and retreat to the countryside for a more private family life after the Moon landing and the receiving of public acclaim. He was, however, a workaholic and didn’t stay on the farm for long. The chart shows his work ethic through a sense of serious responsibility that he had toward the public with a natal Moon conjunct Saturn. The Natal Moon Sabian Symbol degree is A flag-bearer. Both his Moon and Venus symbols refer to a flag, and this was literally manifested when he and Buzz Aldrin planted the American flag on the surface of the Moon.

SAGITTARIUS 26 A flag-bearer This is a symbol of the enduring significance which tends to overshadow the more immediate interests or wholly selfish concerns of man, and the emphasis is on the natural supremacy of common ideals over mere individual ambitions. Implicit in the symbolism is the call for a high self-sacrifice, and for the development of such new dimensions of experience as will permit the self to realize its transcendental aspirations. Every resource of normal life is commandeered for the greater potentiality. The keyword is NOBILITY. When positive, the degree is spiritual exaltation through some dramatic or vital service to all, and when negative, a resort to empty show or a demand for false credit.

The three Sabian Symbols that are circled in the chart wheel that reveal a profound potential are the Moon, Venus a 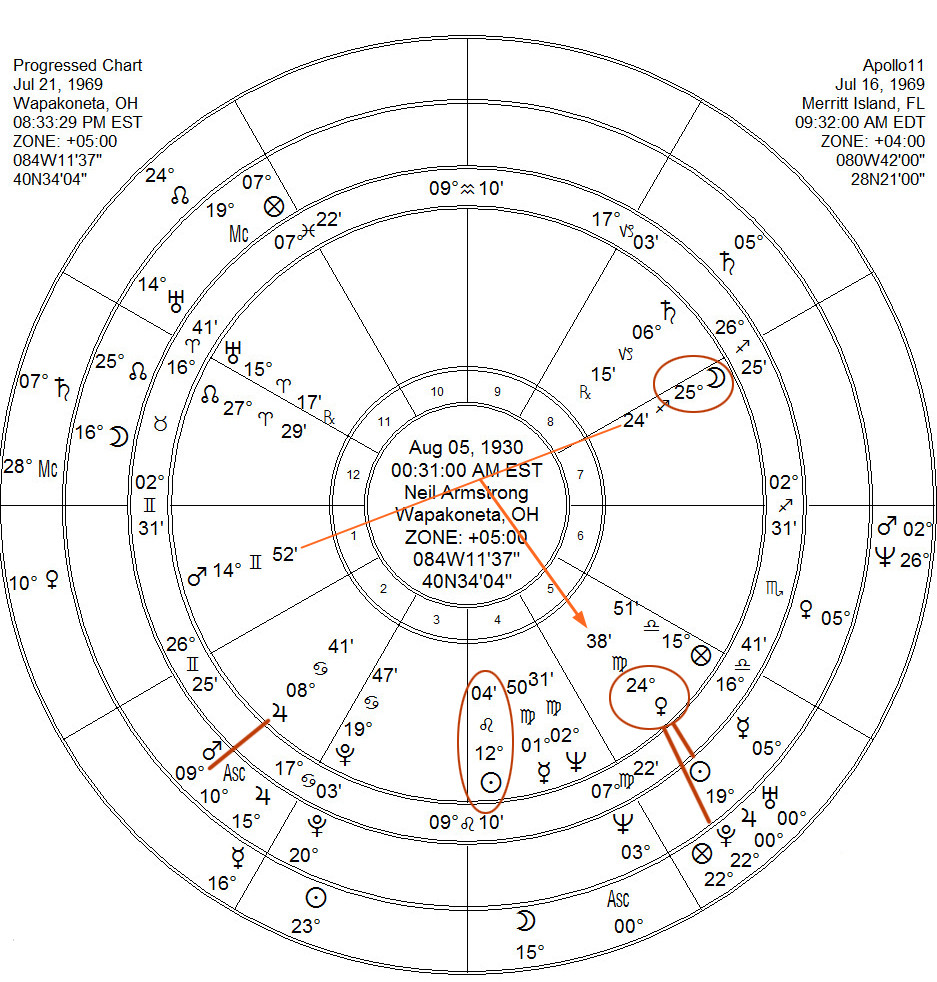 nd the Sun. The Sun is in the sign of Leo with the keyword ASSURANCE. It is in a degree of An old sea captain rocking. Here it is apparent that he would enjoy the accomplishments of his daring youth and passion for adventure through reminiscing. He was the captain and commander of Apollo 11. It is shown in his Sun degree which always reveals the Purpose of one’s life.

LEO 13 An old sea captain rocking This is a symbol of man’s great love for reliving his experiences in memory, and of his gift for achieving a mastery in advance of whatever new situations he may face by bringing all the ramifying relationships to a focus in a personal and competent grasp of their more pertinent potentialities. He fights the battles of the world in his imagination, over and over again. He knows that events repeat themselves, and so may be brought in leash. The keyword is RETROSPECT. When positive, the degree in each person’s unlimited capacity for calling up afresh the powers he has gained in his struggle toward self-fulfillment, and when negative, insensibility to present reality in a full surrender to the past.

The Point Focus Venus Sabian Symbol is A flag at half-mast.

VIRGO 25 A flag at half-mast This is a symbol of the inevitable judgment which life must pronounce on itself, and of the sure rewards that stand ready for whatever proves of worth in the course of effort. The highest of everyday values for the common man are created in a public service which has its first compensation in the individual’s self-fulfillment, and its ultimate justification in some measure of immortal contribution to history. Reputation is the subtle coin by which personality creates an enduring wealth for everyone, to be preserved no less in death than life. The keyword is RESPECT. When positive, the degree is achievement in a full transcendence of selfhood, and when negative, superficial self-dramatization.

Another indication of his extremely significant contribution is shown with Transit Pluto (outer wheel) 1 degree and 38 minutes shy of exact Conjunction with the all-important Point Focus Natal Venus in Virgo. Pluto rules all things profound and transcendental. Indeed his accomplishment must have given him tremendous gratification, far beyond what the man showed to the outside world. A love affair of a cosmic order, he fecundated the Moon with his walk on its surface. No longer would the Moon be the virgin for which Virgo stands. The fifth house reveals self-expression without restraint or limit, and astrological why the man had the “Right Stuff.”

Edwin “Buzz” Aldrin was the astronaut who accompanied Armstrong and was the second person in history to walk on the Moon. Here is Aldrin’s horoscope with his Progressions for the year of the Moon Landing. It is telling of the immense influence this event had on his life. Nine months before the launch, Aldrin had an auspicious Progressed Lunation, revealing that there was a definitive leaving of the past behind, to go forward into a new cycle of Vitality (Sun/Moon pair). He was a member of the crew of 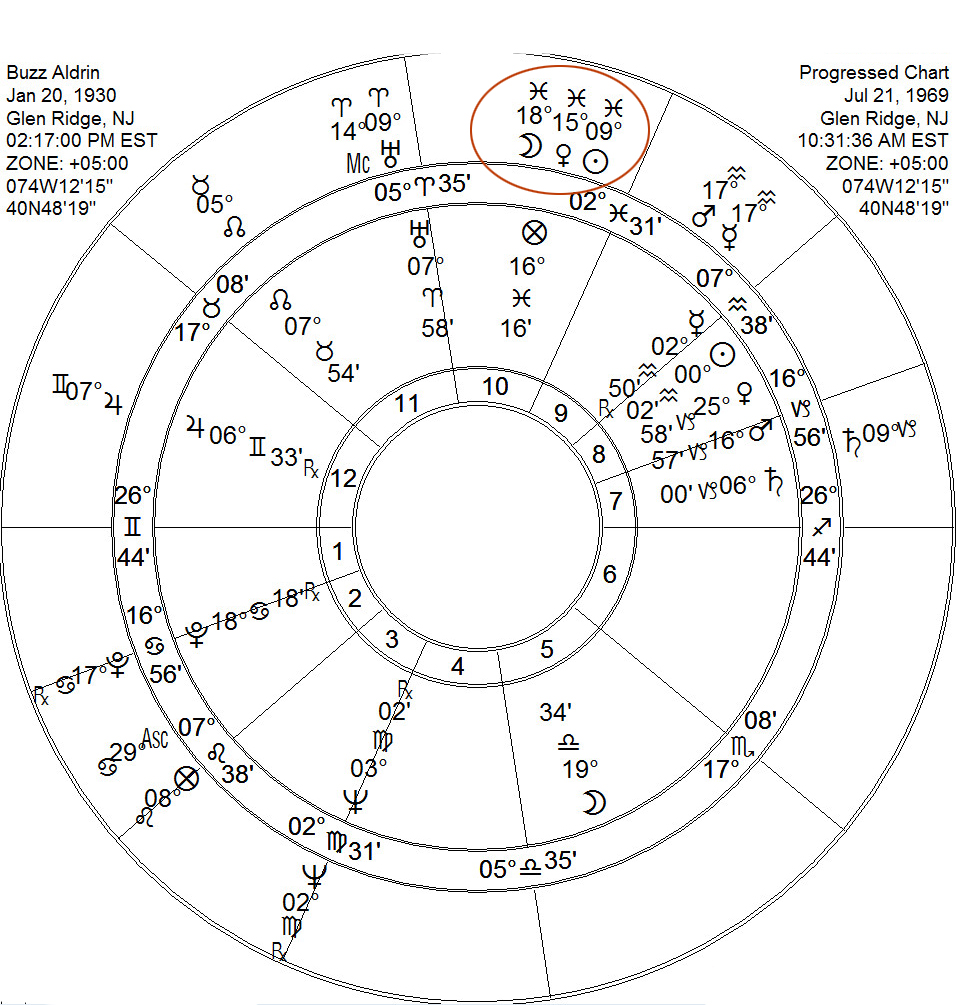 Apollo 11 and took part in an unprecedented human achievement.

Above is the famous photo of Aldrin with Armstrong and the Eagle Lander reflected in the helmet’s visor. What is interesting is that the Sabian Symbol for Aldrin’s Progressed Mars/Mercury Conjunction at 18 degrees Aquarius, is A man unmasked. The reference to headgear is close enough to prove that the symbols are unique and revealing as to when cosmic potentials meet one-on-one with every day, yet extraordinary, human experience.

AQUARIUS 18 A man unmasked This is a symbol of the human mind’s illimitable power for penetrating into the deeper stirrings and underlying motivations of human nature, and of a very modern determination to gain a scientific mastery of every psychological process. Here is a repudiation of all individualism as other than the common divisions of labor in a social reality, and a demand that each person make a public accounting of himself whenever the general welfare requires it. Life becomes a laboratory for an immortal curiosity. The keyword is ANALYSIS. When positive, the degree is a considered self-dedication to greater or more wonderful reasons for being, and when negative, self-betrayal through exceptional ineptitude.

The symbol goes on to say: “Life becomes a laboratory for an immortal curiosity.” The keyword is ANALYSIS. When positive, the degree is “a considered self-dedication to greater or more wonderful reasons for being.” Certainly, this sums up his awe-inspiring contribution to science and exploration.

An even more exciting testimony to the realistic interpretation of symbols shows up in Aldrin’s Progressed Lunation. At 10 degrees Pisces, Aldrin’s potentials are reflected (no pun intended) in the degree of An aviator in the clouds. In the original symbols it states; “As a tiny fleck of dust in the sky the aviator sails across the horizon in absolute mastery of these higher realms.”

Pisces 10 An aviator in the clouds This is a symbol of man’s transcendental powers of comprehension, emphasized here in his exploratory genius and his gift for creating the endless hypotheses he needs for solving the problems of a modern world. He is able to take a perspective superior to any involvement or pattern of limitation, and to examine any special complex of human affairs with a consistent thoroughness of over-view. The inner and outer realms of reality are brought to a point of effective revelation of each other. The keyword is OBSERVATION. When positive, the degree is special competence in whole judgment and long-range planning, and when negative, insensate otherworldliness or irresponsible isolationism.