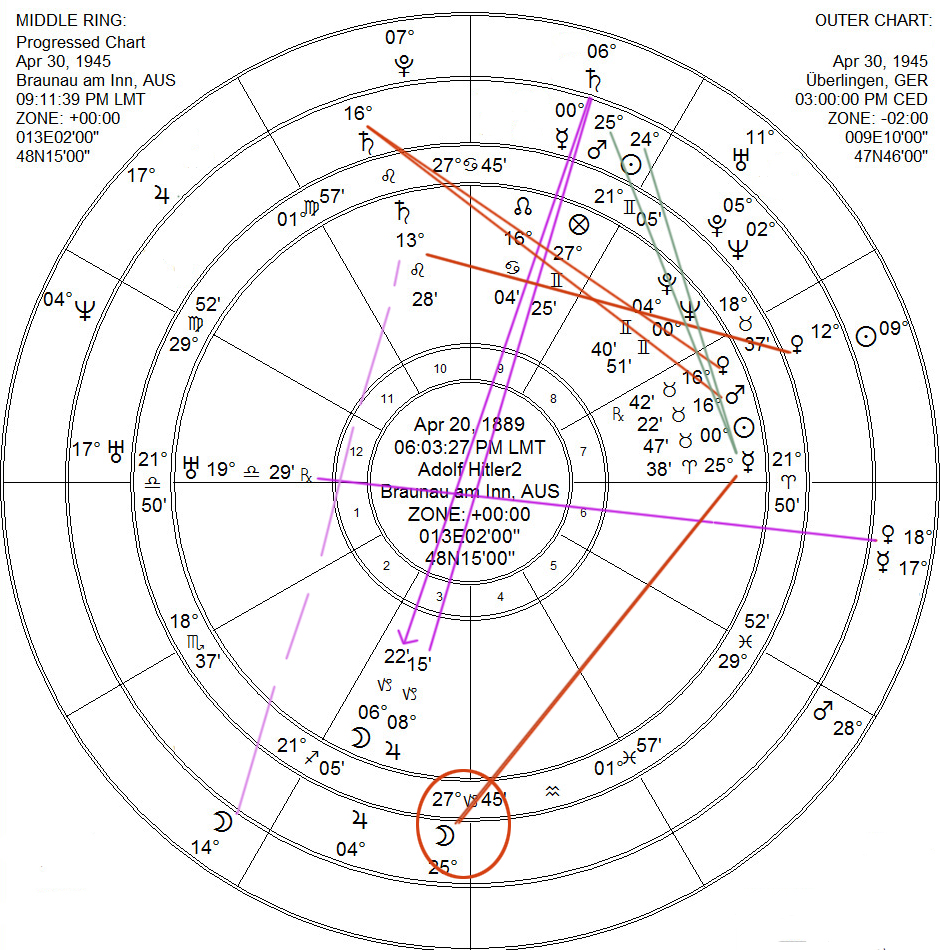 It is assumed that Hitler committed suicide by shooting himself in the right temple. *It is also believed that he had taken cyanide along with his new bride Eva Braun. During the period of time Hitler was presumed to have shot himself, the powerful Progressed Moon at 26 Capricorn, shown in red in the chart, was exactly squaring his Natal Mercury at 26 Aries. Aries rules the head. The Progressed Moon is also making a conjunction with his Nadir, representing the final End of the Matter.

Since the Progressed Moon is deposited by Saturn, we need to look to the aspects of both Transit and Progressed Saturn, ruler of Capricorn. Here we find that Transit Saturn is in exact Opposition to Hitler’s Natal Moon. And one of the most interesting confirmations of an end by extreme pressure of circumstances is the ominous exact Square of Progressed Saturn to Natal Mars and Venus – these two planets representing the fuhrer and his new bride sharing the final struggle.

The Progressed Mars and Sun, shown in green, points to the assistance of a Sextile Hitler had with the removal their bodies after the suicides. Indeed he had several of his entourage faithfully carrying out the details of the cover-up. All the Transits and Progressions in exact Aspect are a corroboration and testimony to a very serious and stressful time and could easily match up with an event such as death.

Hitler’s Natal Venus is Retrograde and this gives testimony to the unconventional value system by which Hitler was motivated. The Progressed Venus in Square to Natal Saturn shows that the results of his unusual belief system backfired in the end.

“Since Hitler had known for many weeks that he was going to commit suicide, he had a plan in place. An SS doctor had instructed him that suicide by cyanide poisoning followed by a gunshot to the head was most effective. Therefore, he obtained cyanide for him and his wife and waited until the time was right. They both ingested the cyanide, and before it took effect Hitler shot himself in the head with his own pistol.”